What Does a Hawk Symbolize

Hawk Symbolism According to Types

Red tailed hawk: With an inherent tendency to mate for life, it represents strong family bonds.

What Does a Hawk’s Feather Symbolize

A hawk’s feather beckons you to become conscious of your dreams since there are messages for you from God and the universe at large, and you need to acknowledge those signs fully.

Having a Hawk as Your Spirit Animal (Totem Animal)

To have a hawk as your spirit animal means that you are optimistic, strategic, decisive and creative. With your mystical vision, you are empowered to see possibilities even in stressful situations, thereby tending to be ahead of everyone else. This makes you anxious to influence others with inspiring words. But, it is not always easy for you to share such thoughts as others might not be able to see like you.

Just as a hawk uses its sharp talons to catch its prey, you use your intuitions to govern your steps in life. You also make every possible attempt to unravel the truth in most circumstances. 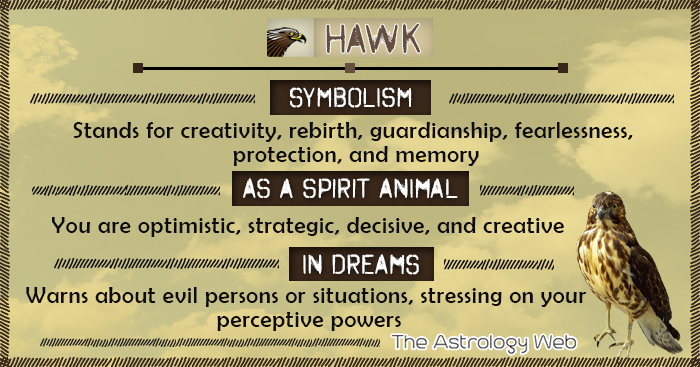 What Does it Mean When You Dream About Hawks

Dreams about hawks are generally a silent warning regarding evil persons or situations, and they remind you to take notice of your powers of perception to triumph over all adversaries.

Seeing yourself being attacked by a hawk points at the verbal abuse that you have to endure from someone.

A flying hawk looks forward to happy times ahead.

A giant hawk signals your insecurity and the fact that someone is threatening you.

Dreaming of a dead hawk indicates your victory over enemies.

A baby hawk in your dream suggests benevolence and concord.

If you see a wounded hawk, know that your friends will help you to uncover deceit.

A black hawk stands for great destruction and disorder.

What Does Seeing a Hawk Mean

Seeing a hawk is a reminder for you to free yourself from outdated thoughts and soar high to flourish in life. If you see a hawk carrying a snake, you must pay attention to your immediate events and save some time to reflect and consider things. On hearing the call or cry of a hawk, awaken your intuitive ability to decipher spiritual messages.

What Does it Mean When a Hawk Crosses Your Path

If a hawk crosses your path, stay focused and try to see your difficulties from a different perspective to emerge victorious. A circling hawk is suggestive of either death or conquest.

Spiritual and Symbolic Meaning of Hawks in Different Cultures and Religions

According to the early animal symbolism of the Christians, the wild hawk was seen as evil, the tamed hawk as the convert and the hooked one was held as the eternal hope of Christians in the light of Christ. Simultaneously, the bird’s habit of grasping its prey swiftly makes it a symbol of injustice and violence.

Highly admired by many tribes for its speed, perseverance, endurance and sharp vision, a hawk is seen in the role of a guide as well as the bringer of change.

In Cherokee mythology, two giant raptors were called, “Tlanuwa” meaning the “Great Mythic Hawk” that flew up and down cliffs and carried off small children.

Here, a hawk is seen as influencing one to extensively look for his ancestral roots and then determine what’s positive or negative.

A hawk is invariably associated with war by the Chinese.

The Egyptians looked upon a hawk as a royal bird as well as a symbol of the soul.