What Does a Lion Symbolize

Having a Lion as Your Spirit Animal (Totem Animal)

To have a lion as your totem animal means you are fiercely independent, creative and confident in all walks of life. You love confronting challenging situations and are adept in controlling difficulties by projecting a quiet demeanor.

Being highly influential, you strive to bring about positive changes in your life as well as that of others. The family is of utmost importance to you, and you remain loyal to your near and dear ones. You can surpass all limits in trying to defend your family’s honor. 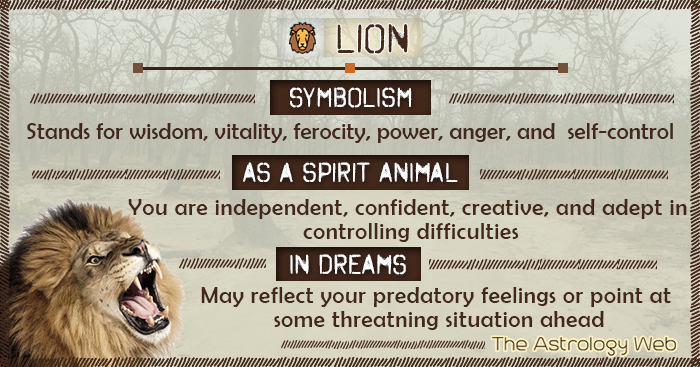 What Does it Mean When You Dream About Lions

Dreams about lions may have different meanings and are mainly related to your immediate context. For instance, a lion’s dream may reflect your characteristic traits such as inner predatory feelings, point at some threatening situation ahead or guide you to overcome negative aspects of life.

Dreaming of taming a lion is a warning for you to change your old habits to move forward in life. To see yourself as a lion tamer is also a suggestion of your ability to keep your anger in check.

To see yourself killing a lion refers to the tremendous pressure you are facing concerning an important issue. Seeing a dying lion, on the other hand, indicates a significant loss of your strength.

A dream of a lion’s attack points at someone or something destructive enough to cause your downfall.

If you see a lion chasing or hunting you, it means that you are purposely trying to ignore certain aspects. Adopting a new path may usher in fresh possibilities, but you are bent on passively following the path of self-destruction. A lion and a bear’s dream also hold the same meaning. It may further point to your strong desire for isolation and independence.

Escaping from a lion means you are going to be able to avoid an impending danger.

Dreaming of fighting with a lion signals a scandal, while seeing yourself defeating a lion suggests the control you have over your enemies.

To see yourself eating a lion suggests your gaining of more power, whereas riding a lion denotes your patience and courage in overcoming hazards.

Seeing a lion cub looks forward to your meeting a new friend, but if a lion attacks a dog, it implies a loss of good friendship.

Dreams with winged lions are suggestive of forthcoming better times.

A dream about lions in your house stands for your tamed sense of power, and if you see yourself feeding hungry lions, it is an indication of your secret wish to enhance your pride. A lion in the backyard is a reflection of your raging uncertainties.

To see a lion’s head over you is an indication that you may face defeat in your ambitious rise to become powerful.

Dreaming of a lion hugging or licking you implies, comfort, love and brighter moments.

A roaring lion points at your ongoing health problems.

If a giant lion eats you in a dream, be prepared to face unfortunate encounters ahead. A lion’s bite, on the other hand, is a reminder for you to reorganize your life to avoid stagnation. To see a lion eating a man or something else signifies the sudden disappearance of your immediate problems.

Seeing a lion on fire symbolizes the overpowering strength of your passion that needs to be controlled.

A lion on a leash signifies your present confinement.

If you see a lion guarding or protecting you, it means that someone is watching over you for your own good.

To see a lion and tiger fighting is a signal of something buried in your subconsciousness that you need to reckon. A lion and a wolf’s dream, on the other hand, suggest love and coziness.

A lioness in your dream symbolizes ignorance, affection, and pride.

If a pregnant woman sees herself feeding a baby lion, it reflects her motherly passions.

A lion’s claw suggests anguish in affection while seeing a lion’s teeth implies that you will be able to emerge victorious from aggressions.

A black lion’s dream is a sign that you are surrounded by negative energy.

A red lion stands for your eternal wish to achieve enlightenment.

A green lion marks the starting point of life’s transformations.

Lion Spiritual Meaning and Symbolism in Different Cultures and Religions

A lion is mentioned quite often in the Bible. Representing celestial love and utmost truth, it is referred to by Christians as “the Lion of the tribe of Judah”, thereby suggesting how it, apart from symbolizing the Jewish tribe, also stands for Christ. The same figure also features in the coat of arms of the city of Jerusalem. According to a particular legend, a lion is believed to lie peacefully with a lamb when Christ returns, thereby suggesting harmony amidst all.

In various stories, a mountain lion appears as a wise leader who is well aware of his goal and progresses with confidence.

In Chinese and Buddhist Culture

Here, a lion is looked upon as an animal of great magnificence due to its ability to shield humans from demons and ghosts. In many auspicious occasions of China, a special dance called “lion dance” is performed.

A lion, symbolizing royalty, ferocity, and stamina is held in great awe and respect in India. Many gods and goddesses are seen to have lion companions, and one such is Narashima, one of the ten incarnations of Vishnu, who has a lion head over a human body. Goddess Durga also rides a golden lion. In fact, the National Emblem of modern India is a replica of Emperor Ashoka’s Sarnath Lion Capital that constituting four lions, stands for pride, power, courage, and confidence.

In Islamic traditions, a lion symbolizes courage, royalty, and chivalry

The Egyptian people see a lion as representing the massive heat of the sun and also the goddess called, Eye of Ra, who is known to protect the good and destroy the evil. Also, the Sphinx, safeguarding the Pharaoh’s in their afterlife has the body of a lion. Another deity called Aker is believed preside to over with two lion heads.

In Greek and Roman Culture

In ancient Greece, lions were linked with Dionysus, Phoebus, Cybele, and Artemis since according to certain myths, lions drew the chariots for these gods and goddesses. To the Romans, a lion with its massive mane represented kingship.

The symbol of the “Lion’s Paw” was introduced to define resurrection and immortality. Highlighting their quest towards “Light”, it signifies the importance of gaining spiritual insight and strength.

The National Symbol of Singapore constitutes a lion’s head, and it signifies the nation’s commitment and loyalty.