What Does a Rabbit Symbolize

A rabbit symbolizes hope, prosperity, comfort, love, intuition, cleverness, motion, harmony, new opportunities, sensitivity, and imagination. While, its ability to have more than 40 babies in a year makes it a representative of springtime, with the associated traits of abundance, fertility, creativity, rebirth, faithfulness, and longevity; its timid nature stands for fear.

Bunny Symbolism According to Color

White rabbit: Signifies tenderness, magic, and manifestation. It signals a beautiful life ahead.

Grey rabbit: Hints at the host of new possibilities that you need to explore to gain success.

Having a Rabbit as Your Spirit Animal (Totem Animal)

To have a rabbit as your totem animal means that you are gentle, smart, spontaneous and nurturing.

Being speedy in recognizing opportunities, you seize and utilize them readily to attain success.

This does not mean that you are vain as a result; your journey towards perfection is marked by your social and modest demeanor.

You are also adept at understanding the world and its ways. Consequently, stressful situations do not intimidate you, as by applying this knowledge admirably in diverse circumstances, you emerge triumphant. 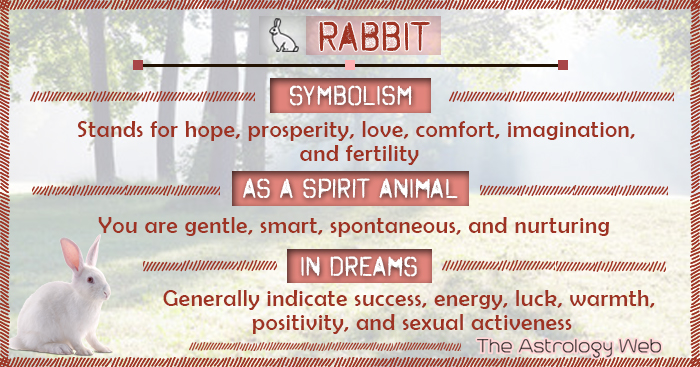 What Does it Mean When You See a Rabbit

Seeing a rabbit is a reminder for you to grab the opportunity that is coming your way and act on it.

What Does it Mean if a Rabbit Crosses Your Path

A rabbit crosses your path to remind you to listen to your intuitions so as to prosper in life.

What Does a Dead Rabbit on Doorstep Mean

Coming across a dead rabbit on your doorstep may either point towards the new steps of development you have taken in your life or warn you not to lose yourself to unrealistic views.

What Does it Mean When You Dream About Rabbits

Seeing a rabbit biting or attacking you refer to the attention you need to invest in your personal relationships.

Killing a rabbit looks forward to favorable changes in life. Eating a rabbit’s meat also refers to general well being.

If you see a skinned rabbit, it mirrors your inherent desperation.

A wild rabbit assures you success in spite of resistance.

A flying rabbit points at your desire for freedom.

Feeding a rabbit suggests that something will be taken away from you by other people.

A dead rabbit’s dream indicates the loss of a loved one in your life.

Dreaming of rabbits in the house represents your thoughts about having children.

Catching a bunny signals your attempts to achieve success in life.

Chasing a rabbit is a reflection of the temporary happiness you enjoy.

A dream of a rabbit’s hole is a message to move forward in life.

If you see a rabbit in a cage, then realize it’s a warning for you to check your emotions.  A talking rabbit also seeks to guide you to achieve bliss.

An evil or a killer rabbit is a reflection of the craftiness inherent in some people.

A pregnant rabbit or one giving birth hints at the profitable investments you have made earlier.

Brown rabbit: Serves as your guiding light to help you to select the right path

Grey rabbit: Hints at the arrival of someone tricky in your life

Orange rabbit: Stands for the delay that some unexpected changes will face in your life.

Red rabbit: Points at a certain scared female figure in your life.

Dream Interpretations of Seeing Different Body Parts of a Rabbit

To dream of a rabbit’s foot promises good luck.

Seeing a rabbit’s ears point at some impending danger.

Spiritual and Symbolic Meaning of Rabbits in Different Cultures and Religions

In their folklore, the rabbit, known as “Manabozho” or Great Hare, is often looked upon as a funny trickster, responsible for various mammoth events as creating the world, bringing humans, fire and simultaneously teaching shamans the way to carry out sacred rites.

Here, rabbits were considered as “non-kosher” animals, meaning suitable for eating purposes. They were also sometimes given positive connotations.

In the 12-year cycle of the Chinese zodiac chart, the rabbit is the 4th animal. Accordingly, those taking birth within dates such as 1915, 1927, 1939, etc. are said to be born under the Year of the Rabbit and are believed to be friendly, conservative as well as actively kind.

Why is the Rabbit a Symbol of Easter

According to Celtic myths, on each full moon night, a fertility maiden goddess called “Eostre” transformed into her sacred animals, a hare, and a rabbit, thereby triggering people to celebrate the occasion in the form of a festival. Certain Germanic theories hold the view that the rabbit, “Osterhase” delivered gifts to children during Easter. Now, as a significant section of German immigrants settled in America, the tradition of having bunnies seeped in.