What Do Ravens Symbolize

Raven, being a scavenger bird, symbolizes wisdom, secret knowledge, freedom, divinity, death and the mystical ways of the universe.

Symbolic Meaning of a Raven’s Feather

It symbolizes creation & knowledge and is regarded as the bringer of light.

Having a Raven as Your Spirit Animal (Totem Animal)

To have a raven as your totem animal signifies your ability to learn fast that aids you to solve problems in life with ease.

Understanding the link between light and dark, you do not fear darkness, and this is what makes you incomprehensible and intimidating to others. You connect with the Divine self and remain quiet while executing your work.

You are crafty as well as inventive, and you know when to employ your skills for better outcomes to channel your life towards meaningful and constructive future.

You provide protection to others, and people come to you for suggestions about future events, and in this sense serve as a messenger between the two worlds. Further, you are responsible, playful and creative. 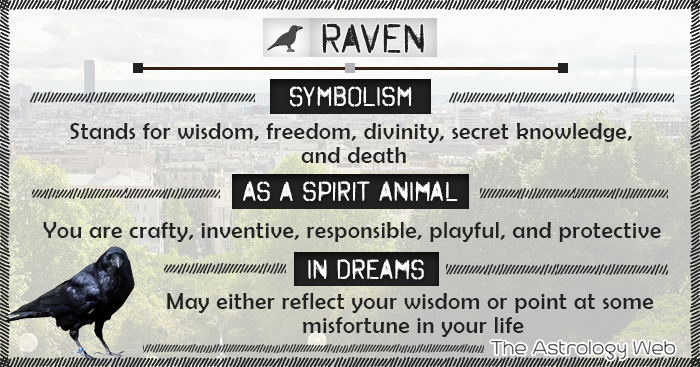 What Does it Mean When You See a Raven

If you see a raven watching you, be sure it is a reminder for you to pay close attention to those around you. Reckon the guidance and knowledge provided by the bird and progress accordingly.

What Does it Mean When You Dream About Ravens

Dreams of ravens may either reflect your wisdom or point at some misfortune in your life. In fact, its analysis and interpretation depend on how you relate your current situations with it.

Seeing a flying raven in your dream indicates that you might face a temporary setback in your life. Dreams with ravens also suggest that you are now ready to outgrow some old habit of yours.

Killing a raven, on the other hand, may stand for the fact that you are unwilling or unable to give up some habits.

To see a dead raven symbolizes that you will be able to drive off every hurdle with your strength.

Seeing a black raven sitting on you means that you will emerge victorious, having dominated your fears.

Dreaming that a raven is attacking or biting you is a warning to be cautious of people who may harm you.

Taming a raven in your dream indicates your intelligence, as ravens are considered one of the most intelligent birds.

Seeing a raven talking may mean some sort of a prophecy, like something you have been worried about in your waking life would take a positive turn. But, since there is a sinister side to the bird, it may also mean bad luck.

A dream of raven feathers is a bad omen that symbolizes your need to be careful in whom you trust, as someone close to you might betray you. However, a white raven feather can mean good angels are there to guide you through your troubles.

Spiritual and Symbolic Meaning of Ravens in Different Cultures and Religions

According to Christian lore, ravens were originally white. In the Book of Genesis, a raven was first sent by Noah to report about the receding floodwaters, but when it did not return, God punished it by turning its feathers black. So the Christians believe it to represent Satan and bring bad luck.

Believing it to be a magical symbol, Native American mythology contends that the islands of the earth were created, when a raven dropped stones into the sea.

The aboriginal Inuits, inhabiting the Arctic regions of Greenland, Canada, the United States and Siberia, worship a god known as the “Raven Father” and hold that killing a raven would bring foul weather.

The bird is closely associated with battle and the Celtic goddess, Morrigan. Hence Celtic art abounds in raven tattoos.

A raven stood for wisdom and thoughtfulness in the Viking world. It was believed that their god, Odin is accompanied by two ravens, Hugin, representing the sway exercised by thought and an in-depth search for information, and Mugin, representing the mind and its ability to detect meaning. These two ravens would be sent by Odin to soar across lands so they can return and relate all they have seen.

Here, a raven is seen as a guide; someone who provides advice in times of trouble.

In Greek and Roman Mythology

The raven was seen as a solar animal by the ancient Romans and Greeks. Consequently, they associated it with deities like Athena and Apollo, who have a close affiliation with the sun. Some Greco-Roman legends claim that once ravens were all white, but since they couldn’t keep a secret to save their life, Apollo turned all their feathers black as a punishment.

The Chinese and Japanese see ravens both as a symbol of the sun and a messenger from the gods.

Apart from these, the national bird of the independent Himalayan kingdom of Bhutan is a raven, and earlier, killing it was taken as a capital crime.