What does a Dragonfly Symbolize

What do the Wings of a Dragonfly Symbolize

The iridescent wings of a dragonfly stand for its discovery of real self by unmasking illusions, while its scurrying flight over water signifies its potential for finding life’s deeper meanings.

Having a Dragonfly as Your Spirit Animal (Totem Animal)

To have a dragonfly as your totem animal means that you are mature and possess a depth of character.

Your inherent wisdom enables you to take things lightly even in dark moments, as well as to enlighten others.

Flexibility is your forte and living life to the fullest is your life’s motto.

Endowed with an uninhibited vision, you can see beyond the limitations of human self to ascertain a self-discovery that is bereft of all illusions.

Since a dragonfly inhabits both realms of air and water, you feel the influence of these elements constantly and are easily able to utilize both to make your life fulfilling. 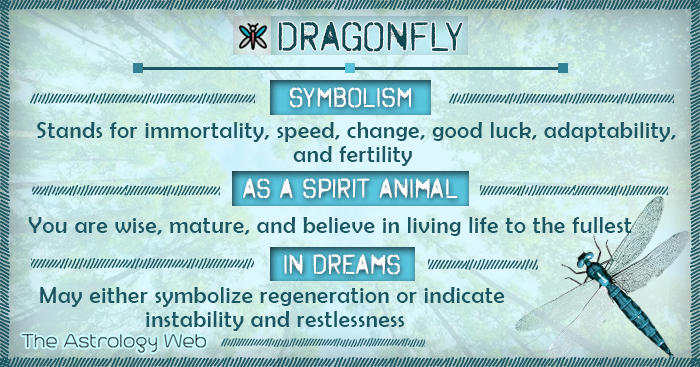 What Does it Mean When You See a Dragonfly

Seeing a dragonfly is a reminder for you to recognize your deep desires and act fast, for whatever chances are available now may not appear at a later time. To see a mating pair of dragonflies means that love is on your way, whereas if you see a dragonfly in your house, realize that you need to pay attention to small things in life so as to evolve into a better human being.

What Does it Mean When You Dream About Dragonflies

Dragonfly dreams, stressing upon the need for freedom and activity, may either symbolize regeneration and change or indicate instability, restlessness and the possibility of something not right in life.

Dreaming of a dragonfly attacking or stinging you signifies that you have been wronged or hurt heartlessly by someone. It might also mean that you have dealt insensitively with someone you know.

Eating dragonflies in your dream is an indication of your singular passion, due to which you are not bothered that others might be offended by your conduct.

A dream of a giant dragonfly refers to your internal worries and insecurities.

Dreaming about a dragonfly landing on yourself promises a good news from someone far off. However, seeing a dead dragonfly points at some bad news you may receive soon.

Seeing a blue dragonfly looks forward to a fulfilling time ahead, when abandoning old constraints, you would be blessed with wealth and prosperity.

Dreams with black dragonflies suggest that something good is going to happen in your life soon. It may also refer to remembrances of someone close, who has died.

A white dragonfly in your dream suggests you get ready to enjoy life as fortune is on your way.

A red dragonfly may have both good and bad implications – it may refer to better times ahead or symbolize the death of a loved one.

An orange dragonfly stands for warmth, balance, and enthusiasm.

A brown dragonfly in your dream marks your intellectual and spiritual awakening.

Seeing a pink or purple dragonfly stands for the love and affection you have for yourself as well as for others.

Spiritual Meaning and Symbolism of Dragonflies in Different Cultures and Religions

In some Native American traditions, it is seen as a harbinger of change and a bearer of the Elemental world, while some take it as symbolizing souls in the afterlife.

The Cherokee Indians consider dragonflies as birds and believe them to have taken birth from nymphs. Seeing them in multiple lights, they usually regard its landing on their clothing, etc. as auspicious.

A dragonfly’s fast beating of wings influences the Lakota and Dakota people to equate it with a mirage or illusion. Accordingly, they adorn their shields with dragonfly images to invoke its power to confuse enemies.

Here, a dragonfly is not only tied with the fairy realm but is also said to possess the power to see the truth along with majestic dragons, the guardians of sacred stones.

Symbolizing victory, strength, and courage, a dragonfly is respected in Japan to such an extent that the first Emperor is said to have called his land, Akitsu Shima, meaning ‘Island of Dragonflies’. Invested with the capacity of restoring health, a dragonfly is also regarded as representing summer and being the guardian angel of the rice plant.

Here it is believed that a dragonfly nymph changes into its adult form and starts dwelling on land after initially residing in water.

Admiring the insect for its darting speed, the Egyptians frequently depicted it on their shields, clothes and personal adornments and wished their soldiers would emulate them in war.

In many pagan cultures, dragonflies are looked upon as magical creatures just like butterflies. This is because both male and female dragonflies are armed with the capacity to change their color with age.