What Does a Fish Symbolize

A fish symbolizes fertility, feelings, creativity, rebirth, good luck, transformation, health, abundance, serenity, intelligence, happiness, strength, and endurance. Connecting us with the water element, it represents the deeper awareness of the unconsciousness or higher self.

Fish Symbolism According to Movement

An upward fish: Stands for evolution of soul

Having a Fish as Your Spirit Animal (Totem Animal)

To have a fish as your totem animal means that you are fiercely independent, adaptable and instinctive.

Gifted with the ability to foster wealth in life, your endeavors naturally result in transforming everything into gold.

But this does not mean that you go about seeking changes always. Aided by the good sense to stay calm in adversity, you allow switches only when you think fit. 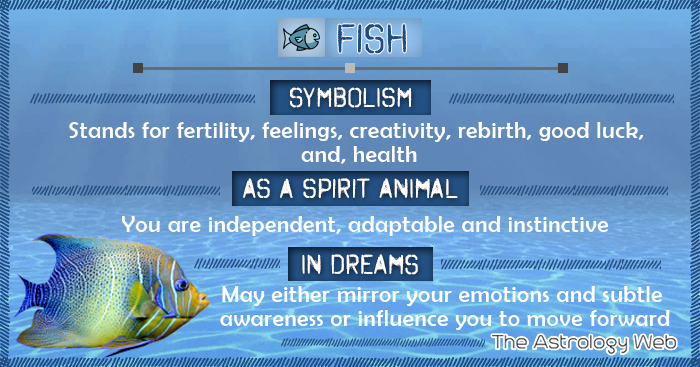 What Does Dreaming About Fishes Mean

Dreams about fishes generally mirror your emotions and subtle awareness; thoughts that you are mildly aware of, but do not take seriously. Fishes in dreams also seem to influence you to move forward, overcoming both pride and ego.

Saving a dying fish by putting it in water points at your earnest hope to acquire an important position by dint of your ability.

Dreams with fishes gasping for air are suggestive of the setbacks you’d face in work.

A fish jumping out of water indicates the promotion you would get in work as well as the wealth you would gain by some means. However, if it falls on the ground, you need to take care of your actions.

To dream of a dead fish is a reflection of your impending disappointment and dismay, while a live fish assures you a sea travel.

Eating a fish suggests that your love life is not too favorable, whereas buying a fish looks forward to your getting a gift.

Seeing yourself eating a fried fish looks forward to you becoming pregnant shortly.

Catching a fish represents the control you’d exercise on your temptation. Seeing or cleaning a fish tank also has the same meaning.

To see yourself being bitten by a fish is a warning of envious persons around, who may harm you.

A well-stocked fish tank implies profitable ventures, while an empty one warns you of secretive enemies.

Seeing fish eggs in a dream points at any new idea, you have thought of from your subconsciousness. The same idea is conveyed on seeing a fish hook.

Watching a fish in an aquarium signals at the decision you have taken to not meddle in other people’s affairs.

A flying fish is a reflection of your emotionally free self.

If you see a fish’s eyes, it means that you need to widen your perspectives.

Having a dream about a fish curry emphasizes your ill temperament.

A dream of feeding fishes signals your victory over your enemies.

To see fish bones indicates old thoughts and insights that you have already worked upon.

Dreams with fishes coming out of a toilet stand for intimacy and tenderness. If the fish comes out of your mouth, then you must have spoken badly about some other woman.

Fishes in the sky suggest brotherhood and love.

Pulling a fish out of your nose stands for lust and relief.

A bag of fishes implies luxury and devotedness.

A fish in a jar symbolizes your stagnant state.

Kissing fishes in your dream imply comfort and empathy.

Dream Interpretations and Analysis of Seeing Different Types of Fishes

Catfish: Points at someone ambiguous.

What does it Mean When You Dream about Different Colored Fishes

Spiritual and Symbolic Meaning of Fishes in Different Cultures and Religions

Fishes, particularly the salmon are looked upon by certain North-western tribes as symbols of long life and wisdom. In some legends, fishes are presented as shapeshifters, controlling the water element.

A fish symbolizes knowledge, inspiration, wisdom, and prophecy for the ancient Celts, They held that the salmon gained its wisdom by consuming the sacred hazelnuts from the knowledge well. Thus, eating a salmon mean inheriting its store of knowledge.

Koi fishes are given by the Chinese during weddings as an emblem of fertility, devotion and happy matrimony since they are often found to swim in pairs.

Believed to be as brave as a samurai warrior, a koi fish is said to swim up rivers as well as climb waterfalls by the Japanese. Over the years, they have endowed it with several positive qualities like courage and strength.

According to their mythology, Aphrodite could evade hazardous events by swimming away, taking the form of a fish.

Here, a fish is taken as symbolizing Christ’s faith, charity, and abundance. A biblical story goes how Christ fed his 5,000 disciples with 2 fishes and 5 loaves and called them “fishers of men.”  In fact, the fish symbol was originally used by the Greeks and Romans as representing fertility. The Christians made an acrostic from the Greek word for fish, “ichthys” as early as the first century and it is, “Iesous Christos Theou Yios Soter”, meaning Jesus Christ, Son of God, Savior. During the time of Jesus, fish being a widely popular staple food, influenced the early Christians to use it as a secret password, mainly to evade persecution of their faith. The Christian fish, largely used by Catholics typically sports a fish with a tiny cross.

In many pagan traditions, fishes are seen as symbolizing female fertility with the constant flow of water, representing the “Divine Mother”.

Here, a fish, specifically a pair of golden ones, symbolizes one of the 8 symbols of the enlightened Buddha.

Amidst the 10 avatars of the supreme god of the Vaishnavas, Vishnu, the first is depicted as a “Matsya” or one having the torso of a man, while the lower half that of a fish.

Here, the quality of fishes to produce plenty of eggs leads it to be taken as a symbol of fertility and luck.