What Does an Octopus Symbolize

The octopus, with all its charismatic complexity, embodies strategy, sixth sense, resilience, deep-running emotions, and creativity.

Having an Octopus as Your Spirit Animal (Totem Animal)

Having an octopus as your spirit animal gives you an inherent ability to protect and defend yourself in the face of all adversities owing to the regenerative capabilities of the animal. You have the power to let things go and bounce back up soon after an unpleasant experience.

The physical flexibility of the octopus endows you with the ability to adapt to any given situation. Similarly, the natural surroundings of the octopus, that is water, also denotes affability.

As the octopus dwells close to the sea floor, you also remain grounded naturally.

As a typical octopus is a loner, you are characteristically independent, strong and secretive.

The fluidity and unpredictability in its movements bestow you with natural grace and poise along with an enigmatic aura.

The spirit of the octopus, considered to have extremely powerful psychic abilities, symbolizes your strong intuition.

As the octopus resides in the depths of the ocean, it is often equated with deep emotions.

Some other spiritual traits associated with the octopus totem are focus, intellect, talent, and complexity. 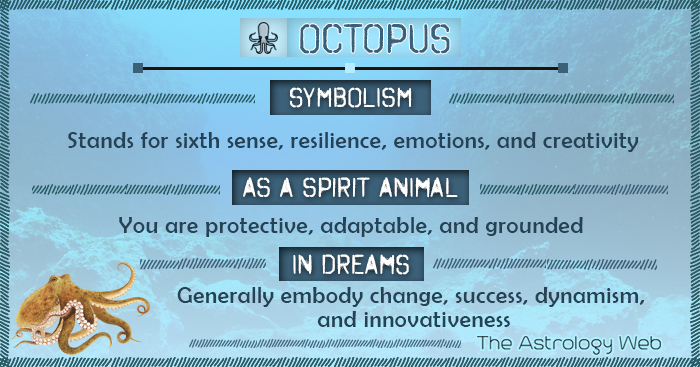 What Does it Mean When You Dream About an Octopus

An octopus dream may have several meanings associated with change, success, dynamism, and innovativeness. It is commonly said to imply that you are multitasking, with a strong hold over every aspect of your waking life. There may be other interpretations as well, suggesting a possessive, over-protective, or finicky behavior on your part.

Talking to an octopus in a dream could imply that certain people around you are looking to you for financial advice.

An octopus in an aquarium signifies that a certain problem or issue has been ‘tamed’ and you will soon see an end to it. Another meaning may be that you are going to shine in your professional life.

Getting chased or attacked by an octopus may signify an enemy or an attack by a manipulative, opportunistic entity who intends to prey on you and ultimately, devour you. If you see it enclosing you with its tentacles or dragging you into the ocean, it may mean that you are about to encounter a difficulty or failure of catastrophic proportions in life.

Seeing a dead octopus may symbolize freedom from or a conclusion to a certain problem that has been bothering you. Consequently, it points towards growth in your personal and professional life or in the field of academia.

Dreaming of a baby octopus may signify your weakness or lack of the ability to protest in a certain situation.

A black octopus alludes to the presence of a domineering and possessive person in your life who has complete control over you.

Seeing a red octopus symbolizes the presence of respect, and coziness in your relationships with your family and loved ones.

Killing an octopus or seeing yourself eating it suggests that you yourself have taken an initiative to eradicate whatever may be troubling you, and are finding answers to the doubts clouding your mind.

Spiritual Meaning of an Octopus in Different Cultures and Religions

The octopus is believed by many to be a symbol of mind control. It has even been mentioned in The Bible. In terms of Christian deliverance, it is often claimed that just as the octopus employs its multiple tentacles and suction cups to take complete control over its prey rendering it powerless, Satan too latches on to its victim and holds it in an unrelenting grip causing spiritual oblivion. In other words, the spirit of the octopus is seen as a demonic, mind-blinding spirit.

On the other hand, a sect of Christians began to draw parallels between Jesus Christ and the octopus during the late Renaissance period owing to their common autophagous, or self-devouring attribute.

In Japan, an octopus is a symbol of someone who is handling a tremendous workload or handling multiple things at once.