What Does a Badger Symbolize

The Badger is the symbol of determination, aggressiveness, self-confidence, independence, solitude, persistence, and fearlessness.

Having a Badger as Your Spirit Animal (Totem Animal)

If the badger is your spirit animal, you possess the traits of both determination and aggression.

At the same time, you might also show up some signs of healing power and the expression of your ‘self’ in your unique way. It means that you have the power to transform your unconscious feelings and thoughts into reality. It is a trait that corresponds to the fact how the badger lives deep underneath the earth in its dark realm.

Quite like the badger, you are ready to defend your ‘boundaries’. Badgers are the symbol of defense and protection, and hence, if you are a badger person, you seldom move away from any project you have undertaken, or in a broader sense, your goal. The inborn badger-characteristics of willpower and self-confidence will lead your way.

You are an independent-minded person and have an individuality in you that makes you different from the others. You never ask anyone for help or support and can shoulder challenges by yourself. 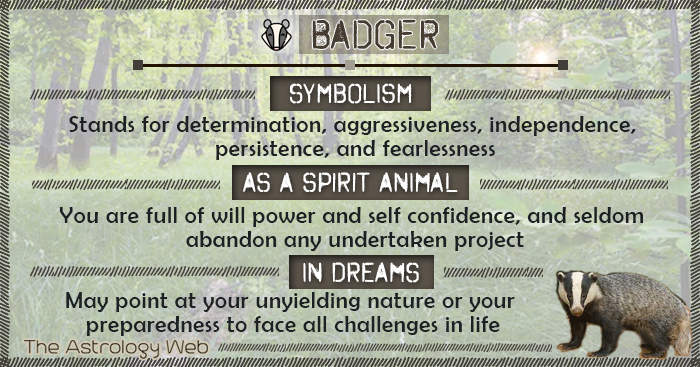 What does it mean when you Dream about Badgers

Dreaming of a single honey badger in the woods relates to the fact that you have always been unyielding. It also means that you are ready to overcome all difficulties and obstacles that come as a hindrance to you (just as these badgers are known to chase away young lions and snatch off their kills).

A dead badger in a dream is a symbol that there might be someone, known or unknown, in your life who wants to cause you some harm, or just annoy or take hold over you in any way.

A group of badgers in a dream means that it is high time you come out of darkness and lethargy to take a more active part in life.

If you are attacked by a badger, that might be an omen that you have been living a life submissive and unnoticed for a long time, and you should begin with a new venture very soon to get noticed by others and shine.

Spiritual and Symbolic Meaning of Badgers in Different Cultures and Religions

Known as ‘Mujina’ in Japanese, the endemic Japanese badgers have appeared time and again in Japan’s folklore, and have often been represented as creatures having supernatural powers, including shape-shifting.

In the Celtic legend, the ‘Holly’ plant is the king of the winter season, while the badger is its companion. The Celts associated both the holly (growing in the snow), as well as the badger (always striving for survival) with the harsh season of winter, and they became the symbol of strong will and survival.

Spiritually, the animal represented as the symbol of aggressiveness among Native American people. They also believed that it is quite auspicious for one to see badger tracks since it signifies success.

Since the creature represents traits like aggression, bravery, territoriality, etc., it is believed that an individual whose house, property, or any object of possession is under the influence of evil eyes should get a badger tattooed on the body. It can bestow the person with good luck by warding off any possible intruders.

As the name suggests, the ‘Wisconsin Badgers’ is an American sports team that represents the University of Wisconsin–Madison located in Wisconsin, and their logo shows a badger.