What Does a Bat Symbolize

Having a Bat as Your Spirit Animal (Totem Animal)

Having a bat as your totem animal means you are perceptive, flexible, talented and keenly aware of your surroundings. It is thus, not very easy for anyone to deceive you since you can easily see through illusions.

However, this does not mean that you are always finding faults in people. Using your wisdom to understand things, you seek to make others happy by communicating or touching gently, and this social attitude undoubtedly allows you to enjoy a favorable position amidst all.

The family is vital to you, and you prefer to listen to your heart on requiring emotional assistance.

Just as a bat demonstrates its power in handing upside down even while giving birth, so too you are strong mentally and use this ability to decide when to move on along as well as when to stay. 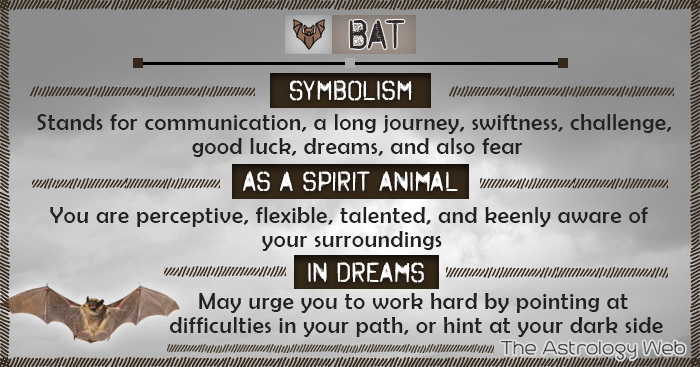 What Does it Mean When You Dream About Bats

Bats in dreams generally trigger you to work hard for your spiritual and psychic development by pointing to the difficulties you’d face henceforth. They may also reflect the unknown world by exposing your dark side.

Killing a bat refers to the disappointment you would arouse in other people by securing all attention to yourself.

Dreaming of a bat attacking, biting or chasing you implies that a friend would make you aware of an issue. If the bat bites or attacks someone else, then the matter is of concern to some other person.

Dreaming about catching a bat hints at your ability to make your friend demand more of your services since you are conscious of his weaknesses.

Seeing bats in the house is a reminder of the evil ways by which you have inherited a particular amount of money. Hence, it would make you repent.

To dream of a bat in hair suggests the death of some close relative.

Dreams with bat caves stress upon the need to seek renewal within yourself.

A dead bat refers to someone, who is ungrateful towards your favors.

Dreams about a baby bat points at quietness and lust.

Eating a bat points at your successful elimination of a confusing option.

A white bat signifies the death of any of your family members.

A black bat announces some disaster in your life.

What Does it Mean if a Bat Crosses Your Path

A bat crosses your path to remind you to pay attention to physical, mental and emotional ideas to look forward to harmonious changes in life.

Spiritual Meaning and Symbolism of Bats in Different Cultures and Religions

Here, a bat embodies intuition, vision, dreaming, and communication. The last trait triggers the Native Americans to take bats as extremely social creatures, highly sensitive to the feelings of others.

Believed to be messengers of Satan, the Puritans held that if a bat flew very close to a person, then it indicated that he was being bewitched by someone.

In Japanese and Chinese Culture

The Japanese see bats as symbolizing chaos, unhappiness, and unrest.

Bats have been regarded with respect for a long time by the Chinese. They are taken as male principle, while fruits and flowers are considered females. They also embody blessings and happiness.

According to shamanic beliefs, a bat flies into your life to signify a substantial transformation, you are about to take for achieving higher goals.