What Do Bears Symbolize

A bear stands for energy, confidence, self-healing, peace, understanding, solitude, motherhood, activeness, courage, resurrection, optimism, and majesty. As a totem guide, a bear shows you how to overlook your minor problems and appreciate the beauty of life.

Having a Bear as Your Spirit Animal (Totem Animal)

To have a bear as your spirit guide means you stand as a strong support to those facing a hard time. Using your strength, you can fight till the end despite any setbacks.

Truthful and straight-forward, you stick to your principles, going to any extent to prove yourself. Wherever you go, your larger-than-life character inspires respect and admiration.

Your powerful stature makes you the first choice for playing the role of a leader. Also, you waste no time in taking action and finding a quick solution.

Your demand for privacy and peace as for you a chaos-free environment resembles the hibernation cycle of a bear. You believe in simple living and high thinking. 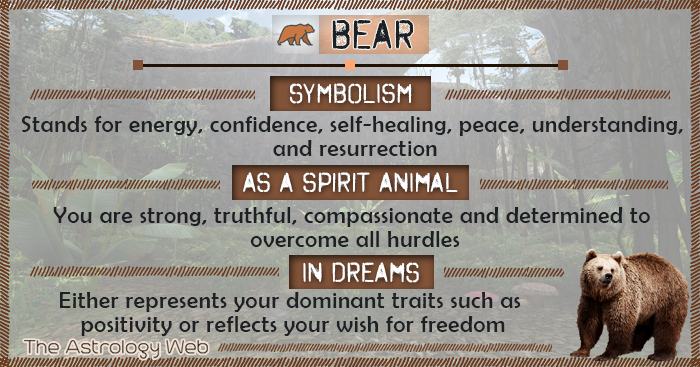 What Does it Mean When You Dream About a Bear

Dreams of bears may reflect your fear of surviving on your own without any assistance. You are looking for a way out that would make you less dependent on your caretakers and value freedom.

Having a dream about a bear attacking or mauling you signifies your anger that needs to be kept in check. On the other hand, a bear biting your hand signals a threat to your life.

A dream where a bear is about to eat you may denote a positive transition in your life. If a bear is seen eating a dog in your dream, it announces a win against your enemies.

Running away from a bear that is chasing you implies that you are afraid of someone or something and want to escape. Seeing an evil bear holds the same meaning.

A dream about a bear as a pet testifies your sentimental behavior towards others.

Killing a bear in a dream indicates that you have enormous courage to face any obstacle. If a dream showcases you shooting or hunting a bear, it is a sign of success.

Dreaming of fighting with a bear is a sign of injustice you are likely to experience in the future.

Riding on a bear reveals your limited power that’s deterring you from fulfilling your ambitions.

Hugging a bear discloses your displeasure in mixing with some people you don’t like.

A friendly bear talking to you in your dream reminds you not to judge everyone only by their outward appearance.

A dream of being licked by a bear implies that someone will come for advice to you.

A naughty bear playing with you in a dream refers to your frisky nature.

A bear walking in front of you might mean that your economic status will get better.

A flying bear brings to light your desire to control your subordinates.

While locating a bear on a field expresses your demand to be free and independent, finding it inside your house suggests that a family member is bossing over you.

Spotting a sleeping bear in a dream reminds you to search your soul and find answers to your troubles.

A giant bear stands for a cold war you are having with your counterparts.

To dream of a bear in water could mean that you are too irritated doing your duties. Similarly, seeing a beer underwater shows your desperation to go back to your carefree days. On the contrary, a swimming bear assures security and happiness.

A bear with cubs shows your over-protectiveness towards your young ones.

Turning into a bear in a dream symbolizes those aspects of your personality that you are utilizing to fit into the current situation.

Dreaming about a bear and wolf symbolizes a misunderstanding that has been unnecessarily created between you and a friend.

Holding a teddy bear in a dream represents trust and friendship.

A gummy bear could represent the satisfaction you are feeling by staying with your family.

The foot or paw of a bear suggests you remain grounded and lead a modest life.

The skin of a bear denotes accomplishment of your goals.

A dream with a bear face suggests you to stop worrying about minor issues.

Setting a bear trap in your dream points to the obstacles you will come across that would be difficult to cross.

A dream about a black bear means that you are losing your patience too quickly in the recent times.

A brown bear is a symbol of brutal passion and ferociousness.

A red bear is a sign of chivalry and honor.

Spiritual Symbolism of Different Types of Bear in Dreams

The appearance of a polar bear (white bear) in a dream symbolizes reawakening of your spiritual strength.

A koala bear symbolizes great luck in love and marriage.

To see a Kodiak bear in a dream is a recommendation to stay vigilant all the time.

Significance of Bears in Dreams Based on Different Traditions

In Islamic beliefs, dreams about bear are related to treachery, deceit, and sin.

In Bible and Christianity it is believed that a dream with bears is a symbol of hidden fears.

Various tribes of Native America consider dreaming about bears as auspicious that may bring honor and good luck.

Symbolic Meaning of Bears According to Diverse Cultures and Regions

Artio, the goddess of wildlife, turned into a bear to help hunters cross forests safely when they invoked her spirit. As a Celtic symbol of strength and power, a bear is called upon during the dark winter months by warriors for endurance. Since bear was also regarded as the Primal Mother, bear claw symbols were used as amulets.

According to a folk story, a mother bear was pregnant with big babies that made it difficult for her to move and eat. While wandering around a green field, she found a redwood sorrel plant that spoke to her, advising to eat some of its leaves to bear the weight of the babies. As the treatment worked, she recommended her other Sioux sisters to do the same, and therefore the bear is represented by the Sioux symbol.

A Shoshone sage while on his trance walk had seen a clan of bears performing a ritual dance. Many Native Indian folklores feature skinwalkers that refer to a shaman who would often take the form of a bear. A Haida legend has described young men killing bears and wearing the skin to hunt other animals.

The Navajo tribe would carve a bear on their totem poles. The Zuni tribe believes that keeping a small quantity of cornmeal under the nose of a Zuni bear image before leaving home will protect them. In Hopi mythology, the bear has been mentioned in several legends.

The German city-state uses a black bear on a white shield as the coat of arms of Berlin. In La Puerta del Sol, Madrid, the statues of El Oso y El Madrono (the bear and the strawberry tree) are situated that stand as the official symbol of the city.

In the 16th century, the Eurasian brown bear was used in cartoons, articles, and theatre plays. The Moscow Olympic Games conducted in 1980 selected a bear cub called Misha as their mascot.

During the Han dynasty, the bear was honored and worshipped to such an extent that most pottery, sculptures, and bronze items were embellished with it. In Feng Shui, placing a bear image at the main entrance draws positive energy.

The Ainu people living on the islands in the Japanese archipelago call the bear as Kamui that symbolizes as head of gods.