What Does a Bull Symbolize

Having a Bull as your Spirit Animal (Totem Animal)

If the bull is your spirit animal, you are open to learning the lessons of the importance of steady work ethics. Like the bull (or an ox, the castrated version of the animal), you tend to be both patient and hard-working.

This spirit animal teaches you teamwork, and hence, it is less likely that you take to any venture and give up midway, no matter the project or piece of work involves persistence, modesty, or defending your own ‘territory’ from the vicious forces or negative energies.

It is this bull energy that is making you firm-footed, inspiring you to feel inclined towards volunteer work, and indirectly, resisting you from being selfish, rewarding you with the appreciation that you craved for.

If at times you feel feeble or less strong from within because of the frustrations of your life, the bull (ox) energy will help you feel strong and sturdy, showing the real ‘you’ inside your heart.

While you meditate upon the form of your spirit animal, and you find the large eyes of the bull staring at you, never be afraid. Look into its eyes, and try to visualize the energy lying dormant behind those huge horns and that immense structure. This symbolic vision will undoubtedly help you discover that power, humbleness and sobriety present behind that bold frame.

Like the bull/ox, you can be powerful, carry the royal feeling, yet remain generous and kind-hearted, and live your life with this honest determination. 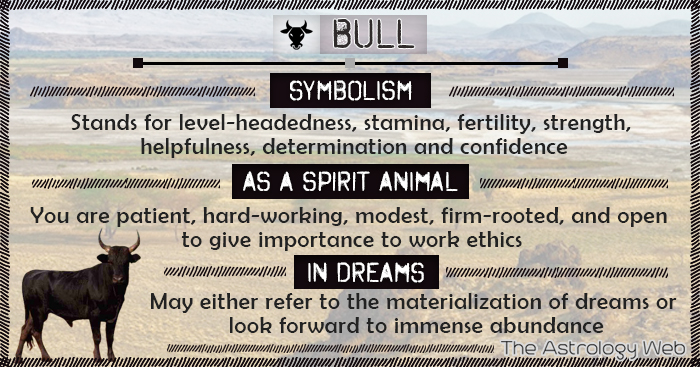 What does it mean when you Dream about Bulls (Oxen)

In your dreams, a view of bulls or oxen grazing, roaming around, or standing peacefully is the symbol of materialization of some of your dearest wishes or desires. Seeing a single calm and quiet bull also symbolizes the same thing.

A number of bulls running in herds symbolizes that an increased abundance is coming your way.

Viewing a scene of you killing a bull in a dream would give you the message that you need to be extra careful about any of the future decisions you are about to take since a wrong self-judgment can affect your whole life at large.

Spiritual and Symbolic Meaning of Bulls in Different Cultures and Religions

The bull plays an extremely important part of Hindu mysticism and philosophy and has been mentioned in innumerable texts and scriptures. The celestial bull ‘Nandi’ is the carrier (mount) and guard of the heavenly abode of one of the three major Gods (‘Trinity’) of Hinduism – Lord Shiva. Even to this day, Nandi sits as a guard at the gates of all Shiva temples, facing the deity.

There were so many bull seals that were found in Mohen-jo-Daro and Harappa from the period of the Indus Valley Civilization (c. 3300 – c. 1700 BCE, Bronze Age). The famous ‘Pashupati Seal’ unearthed from the site depicts a seated figure, usually identified as Shiva, surrounded by animals, one of which is a sturdy bull (identified as Nandi). With all these references, the historians conclude that it might be the origin of the cult of bull worship, especially as ‘Nandi’.

The bull also has several references to Christianity. In the Bible, Proverbs 14:4 contains the symbolism of the beast, referring to its strength. However, most strikingly, God Himself has been compared to an ox by Balaam, a diviner and prophet in the Old Testament (Numbers 23:22).

The Celts considered the bull as a power of procreation, a force that enhances one’s clan. Since cattle were part and parcel to the society, playing a vital role, and were considered to be a luxury, the Druids (priests) would associate this creature with the solar system and believed that they are the representation of riches and wealth.

Among the Chinese people, the bull represents motivation, perseverance, and strong will and is connected to strong headed people, materialistic desires, and hard work.

The Sumerians would see this animal as the symbolism of protection and have often installed it at the gates and the entrances leading to their temples.

To the Hebrew people, the bull stood for harmony, and the ability to protect and take care of one’s family members.

‘Taurus’ – the bull constellation, is one of the 12 zodiac signs since time immemorial. This sign faces the sun during the vernal (spring) equinox, between May 14 and June 19, which is the time of resurgence and renewal of our planet. People born under this sign is said to have a strong head and with extreme willpower.

In the World Finance Market

In the present day finance market, the famous ‘bull’ symbol is used to confirm that the stock market is going upwards (as against the ‘bear’, which symbolizes that the Sensex is going downwards).

While the Indian classical music is many millenniums old, it is based on 7 basic notes (‘swaras’), with each swara originating from the sound/call of a specific bird/animal. The second swara ‘Ré’ is said to have originated from the call made by the bull.