What Does a Crane Symbolize

A crane symbolizes freedom, intelligence, honor, good fortune, royalty, happiness, balance, grace, prestige and maternal love. Aided with the abilities to walk, fly and swim, it depicts its association with the elements of water, emotion, and feminine mystic, while, living up to 60 years, it stands for romance long-lasting marriage, and longevity.

Crane Symbolism According to Type

Grey-crowned crane: Serving as the National bird of Uganda, it is a representative of elegance and prosperity.

Whooping crane: Stands for a primal celebration over birth.

Having a Crane as Your Spirit Animal (Totem Animal)

You are wise, gracious, secretive and protective of yourself and your family. Friends and dear ones occupy an important position in your life, and you do not hesitate to take risks to attain their happiness. You are also extremely territorial and naturally, do not tolerate those trying to invade your privacy. Such an introvert disposition at times prevents you from achieving your goals.

Being social, you love working, traveling and communicating with others. Eventually, while sharing your ideas and thoughts, you earn respect. 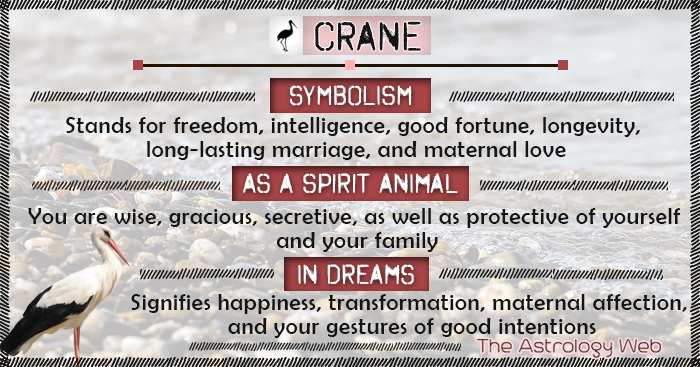 What Does it Mean When You Dream About Cranes

A flying crane in your dream stands for prosperity while one with falling cranes predicts unusual events.

Seeing a crane waiting patiently is a suggestion to cultivate resilience in life.

White crane: If they are seen flying to the north, then they indicate a slump in business; while their southward flight implies meeting with an old friend.

Red-crowned crane: If seen in pairs, they symbolize parting with beloved, whereas hearing their call stands for your promotion ahead.

What Does it Mean if a Crane Crosses Your Path

A crane crossing your path is a reminder to remain patient till all problems subside to move ahead with knowledge and clarity.

Spiritual and Symbolic Meaning of Cranes in Different Cultures and Religions

There is a common belief that your one wish would be granted if you can fold one thousand origami paper cranes. Moreover, the Japanese also follow a tradition of giving origami paper cranes to the father of a bride or groom as a wedding gift to wish them thousand years of bliss.

The Chinese people are much influenced by cranes for embodying both as a messenger of the gods as well as “patriarch of the feathered tribe”.

Here, cranes are seen as symbols of good luck by many tribes. Especially, native fishermen, while going for fishing consider it a boon if they spot a crane.

According to the allegorical descriptions of a 12th-century medieval book, “Bestiary”, the sentinel crane stands for those who watch over the well being of others, provide goods and also protect them from evils.

Here, in ancient times, cranes were looked upon as symbolizing bad luck. In fact, in many of their tales, they are shown as thieves, tricking people by taking their money.