What Do Crows Symbolize

A crow symbolizes power, intelligence, creativity, courage, determination, flexibility, enchantment, broad-mindedness, playfulness, and mystery. Often known as a trickster for its deceiving nature, a crow as a totem animal helps you go beyond the limitations of superficial thinking and develop a realistic approach.

Crow Symbolism Based on Color

White/Albino Crow: Signifies something exceptionally good or extremely bad is going to take place in the future due to your past deeds.

Black Crow: Represents the power of internal transformation as black means the color of night, giving rise to the light of a new day.

Spiritual Meaning of Crows According to Numbers

One crow relays a special message from a close relative or friend who has just passed away.

Three crows indicate a marriage in the house.

Six crows symbolize a theft or robbery that might soon take place.

The feather of a crow is a symbol of financial freedom, high spirit, and love.

Hearing crow calls too often could be an indication that now is the time to make vital changes in your life. You need to tune into your inner self and realize your capabilities.

Finding a dead crow could mean that you are losing the ability to speak the truth.

Having a Crow as Your Spirit Animal (Totem Animal)

To have a crow as a spirit guide means that you are brutally honest in your dealings without being mindful about others’ opinions or reactions.

You tend to go deeper into something to dig out the underlying mysterious associated with it for knowing the inner meaning.

Your strength to deal with adversities comes from the fact that a group of crows is capable of chasing birds bigger than them. At the same time, your sharp manipulative skills help you get away with what you want.

A strong-willed person by nature, you can manage with limited resources whenever the situation demands. In fact, you enjoy coming out of your comfort zone often to face the truth.

Your strong intuitive ability prevents you from making irrational decisions about something or someone.

As you have a keen eye for detail, nothing can hide from your sight, no matter how small it appears. A soul-seeker, you seem to connect well with your divine self. 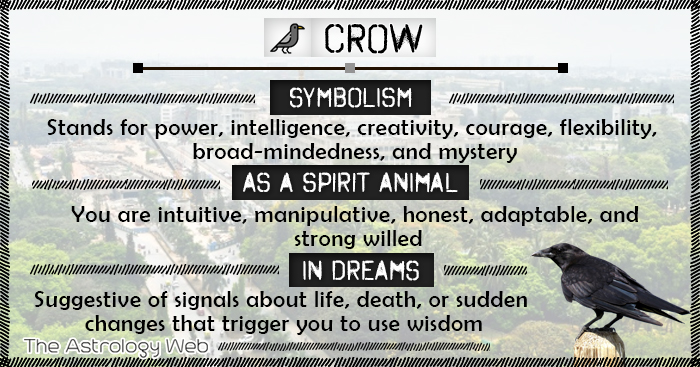 If you see black crows flying near you too often, then it could suggest that you are experiencing an imbalance in your life. There is a strong urge in you to use your creative gifts to do something different.

What Does it Mean When You Dream of Crows

Dreams about black crows may hold several meanings, sending signals about life, death, or a sudden change in life that are coming from the subconscious mind, suggesting you to use your wisdom for solving problems.

If a flying crow shows up, it signifies the necessity to express your deep-seated feelings. Bottling up your emotions would only stop you from moving ahead and get success.

Dreaming about a flock of crows pecking or attacking you symbolizes a current conflict in your life that you are running away from instead of resolving.

If a black crow is staring or following you, then it indicates the positive changes that are going to take place soon, bringing happiness and satisfaction.

Seeing a crow inside your house could mean getting betrayed by a close one, while a flight of crows promises wealth and prestige, lasting till the end of your life. However, if the dream is about a crow entering your house, it symbolizes the arrival of guests.

A crow biting you signifies anger towards someone that cannot be shown in waking state.

Dreaming about chasing a crow, points at some offense you are committing right now and fearing its ill consequences.

If you see a crow landing on your arm or sitting on the shoulder, it might mean that you have understood the conflicted feelings going on in your mind. On the contrary, a crow sitting on your head is a sign of bad luck.

Having a dream about crow hitting your head suggests that your near and dear ones are not happy with you.

A dream of a crow eating flesh means your ancestral spirits are protecting you from all dangers.

Killing a crow in a dream reflects a habit you are refusing to give up. On the other hand, shooting a crow is related to achieving your dreams.

A dream where you are catching a crow indicates the possibility of a sorrowful event such as a death in the house.

Dreaming about petting a crow suggests that you are acknowledging some of your physical attributes without shying away.

Having a dream about feeding a crow reveals a desire to get help from someone who is not benevolent.

Saving a crow in your dream could mean that you always like to play the role of a victim for gaining sympathy.

To see a crow laying eggs may imply that you are going to repeat one of your old mistakes.

The appearance of a crow in a cage in your dream is a signal that you are acting like a hypocrite without showing any gratitude.

Seeing a wounded crow signifies conspiracy being hatched against you by a close one.

A sight of a crow on fire is linked to end of troubles and a new beginning.

To see a baby crow denotes huge profits by doing the same job that you had once left in the past.

A giant crow in your dream is a representation of a problem overtaking you and causing worry.

If you observe the death of a crow, then it could mean you will soon give up your bad habits.

A dream where a crow is being friendly and talking to you symbolizes compromises being made with a known person to ease tensions for a better future.

If you see only the eyes of a crow in your dream, then it implies a relationship with the spiritual world.

A dream about a white crow is a good sign, meaning that you no longer have to be afraid of any danger.

A gray crow signifies your struggles and failures.

Seeing a red crow means you want to get your freedom back through fighting and violence.

Spiritual Symbolism and Significance of Crows in Various Cultures and Religions

In most parts of Europe, the Catholics see the black crow as a symbol of death and ill luck. In Ancient Hebrew, crows were considered filthy, but the Gods treated them with kindness.

During the Medieval Period, occultists used the symbol of crow foot to cast death spells on people.

In Japanese Shintoism, crows are regarded as messengers of God. Some of their mythological tales have shown crows bringing food and good fortune.

It is believed that Athena was disappointed with the crow for being too talkative, and replaced it with the owl. The crow was then sent by Apollo to the aquatic water to fetch water, but it ended up eating ripe figs, for which it was punished. As a result, the crow was placed in the constellation where Hydra deprived it of drinking water forever.

These cultural beliefs of the Greeks have also made an enormous impact on literature as seen in Aesop’s Fables where the crow plays a prominent character.

While doing witchcraft, the Shamans used crows as spirit animals.

The crow is one of the symbols of the Aboriginal American Indians who believe that it has the power to talk and make wise decisions. The Cherokee tribes have often told stories of seeing a crow with a fish-like tail.

In the First Nations

One of the physical forms of Dharmapala Mahakala, the wrathful God of the Buddhists, is represented by a crow.

In China, the cawing of a crow is considered to be a bad omen when someone is negotiating a deal.

Although in Hindu mythology crow is regarded as the vehicle of Lord Shani (Saturn), it’s often associated with darker aspects of life such as death and health ailments.

Based on some narrations in the Hadith, killing a crow is not considered as an offense. There is a chapter in the Quran where the son of Adam is being taught by a crow to cover the dead body of his brother by digging up the earth.