What Does a Dog Symbolize

A dog is a symbol of fidelity, bravery, faithfulness, cooperation, communication, intelligence, adventure, friendship, patience, consistency, curiosity, protection, and devotion. As a totem animal, a dog teaches you to love someone unconditionally without any expectations.

Dog Howling or Crying: Warning for severe disease or even a death in your house.

Having a Dog as Your Spirit Animal (Totem Animal)

To have a dog as your spirit guide means that you are always willing to fight injustice while maintaining your integrity.

Your guardianship skills make you a caring and protective person. As it is the characteristic trait of a dog to stand for its pack in times of danger, you too are ready to shoulder any responsibility when the need arises.

Steady and generous, you love working for a social cause.

You are a loyal,  reliable companion, especially for those who are lonely and dejected.

You are highly energetic and work extremely hard to make your superiors happy. This nature sometimes lets you down when you find your counterparts not doing their fair share of work.

You are equally playful and like taking a break from work to enjoy your free time to the fullest. 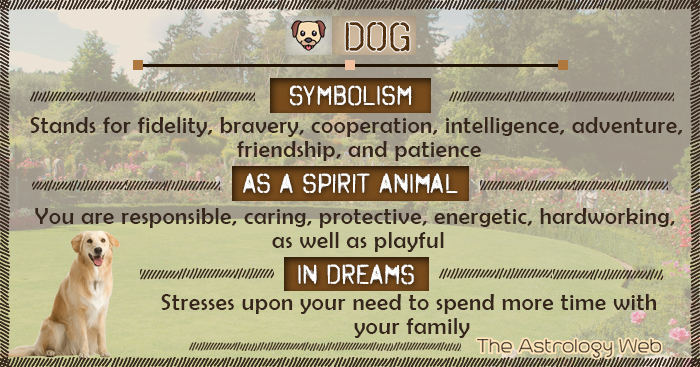 What Does it Mean When You Dream About Dogs

When you see dogs in your dreams, it indicates that you should spend more quality time with friends and family. You need to ask others whether they enjoy your companionship rather than assuming things.

To have a dream about a barking dog reflects your harsh behavior annoying others. Likewise, watching a dog on fire is an inkling about your hot temper hurting people close to you.

A dog walking in a dream might be a feeling of pride in taking proper care of someone. Walking on hind legs is a call for support and love.

Dreaming about getting a dog implies that you value socialization and true friendship.

A dog running in your dream suggests that you are ineffective in handling a particular situation. If a dog chases you, it means that you are taking someone’s loyalty for granted.

A jumping dog signifies your erratic mood swings. On the contrary, a dog jumping out of your window or car indicates a desire to run away from your problems.

A dream where a dog is attacking you could mean that you have to take up the role of a protector.

When a dog is escaping from you, it implies that you should not keep your feelings suppressed for long.

A dream about a dog peeing or urinating on you is a suggestion to release your stress and relax for a while.

A pack of dogs fighting among themselves signals a conflict between you and someone dear to you over minute issues.

Dreaming about a dog biting your arm or hand may stand for disloyalty while being bitten on the leg shows your inability to balance the various aspects of your life.

Seeing a dog licking a bone in a dream is an indication that you should consider other people’s feelings. A dog licking your face refers to a mutual understanding in one of your relationships.

A choking dog symbolizes feelings of guilt and fear.

A dead or dying dog may foretell the loss of an intimate friend. Similarly, a growling dog reveals your inner conflicts. However, seeing a dog getting shot or killed indicates that certain things that have been irritating you are soon coming to an end.

Watching a dog getting drowned discloses your insecurities. On the other hand, an underwater dog pushes you to be open about your emotional side in waking life.

Observing a dog falling off a balcony is an assurance about regaining your confidence and facing problems.

To see a dog being hit or run over by a car reflects your materialistic desires. On the other hand, a dog being injured or hurt suggests you pay attention to your health.

A missing or lost dog in a dream implies your fear of losing something dear to you.

Hearing the howling of a dog in your dream is a sign of imminent danger.

A vicious dog showing up in your dream symbolizes forthcoming hardships and adversities.

To witness a dog digging holes means that you are trying the find out the meaning of your existence. Similarly, a dream about a dog swimming insinuates that you need to find a reason to stay happy.

If a dream features a dog being stolen, it signifies an identity crisis you are experiencing right now.

Kissing a dog alludes to your diplomatic behavior towards everyone.

A dream where a dog is talking to you reminds you of your hidden potential that could be used to achieve certain goals.

Coming across a dog vomiting might promise good health.

Dreaming of a dog giving birth to puppies throws light on your nurturing side.

A dog eating a puppy may be an interpretation of your attempt in hiding petty flaws from others.

To see a puppy in your dream expresses strong sentiments towards your newborn.

A dog turning into a human means you are longing for companionship.

Having a dream about a dog during pregnancy may ensure the birth of a healthy baby.

A dog losing hair symbolizes aging and change in your outward appearance.

To see dog’s body infested with lice or fleas is a warning about an embarrassing situation that would be created soon by your close ones.

A dog’s tail falling off predicts an occurrence of an unusual event.

A dog’s paw is a symbol of vulnerability and impulsiveness.

The appearance of dog’s excrement/feces in your dream signifies money and wealth.

A dream about dog food stands for responsibilities that have been given to you.

What Do Different Colored Dogs Symbolize in a Dream

A big black dog symbolizes the darker aspects of your life that are being revealed to you.

A white dog means a reflection of your inner self.

A red dog may point to a trustworthy friend who may deceive you in the future.

Seeing a two-headed dog indicates that you always put extra effort to prove your loyalty.

A three-headed dog may refer to strength, honor, and aggressiveness.

A dream about a three-eyed dog stands for psychic power.

A three-legged dog or one with a leg cut off could mean favorable opportunities knocking at your door.

Dreams Analysis for Seeing Dogs with Other Animals

A dog feeding on a mouse signifies that someone close to you is using up your resources for personal benefits.

If a dog is seen killing or eating a snake, it relates to the fulfillment of your desires. On the contrary, seeing a snake biting a dog implies that you are constantly worried about your family members.

To dream of a dog eating or killing a cat may have some connection with profitable earnings.

A rabbit being killed by a dog in your dream means that you want to stand on your own feet.

During Biblical times, having a dream about a dog would symbolize misfortune and natural calamities.

In Islam, having dreams about a dog denotes someone close to you is playing the role of an informer to your enemies.

The followers of Hinduism presume appearance of a dog in a dream as inauspicious that could lead to bad health, loss of wealth, and even death.

Dog Spiritual Meaning and Significance in Various Religions and Cultures

The Dominican order of friars, founded by religious sisters and nuns, used a black and white dog as their symbol. Saint Roch was recognized by the Catholic Church as the patron saint of dogs who died due to plague while doing noble work. It is believed that Lord Jesus had once told a story of Lazarus, a poor man whose wounds were licked by street dogs. The Bible has mentioned the striking resemblance between pariah dogs of Syria and jackals that are useful as scavengers.

Since dogs have a major role in the Hebrew society, the Jewish law expects their people to feed them on a regular basis.

In Celtic culture, dogs were treated with respect by royalty and warriors, and also given as gifts to men of honor, displaying loyalty and valor. Dogs have been portrayed in several Renaissance art and literary works.

In Native American folklore, dogs were the obedient friends of men, accompanying them for hunting and guarding. According to the Aztec people of Central Mexico, Xolotl, the god of death, was a dog-headed monster.

In ancient times, Egyptians had found a spiritual relation between dogs and the jackal-headed god of the underworld. In the Anubieion catacombs at Saqqara, many saw the burial of holy dogs.

In Zen Buddhist literature, a dog with a Buddha-like nature is considered to be an enlightened soul.

In Chinese astrology, a dog is one of the 12 zodiac signs. In fact, the day after the Chinese New Year is observed as the birthday of all dogs

In most Japanese Shinto shrines, dog-like lions known as komaina can be seen on either side of the entrance that is believed to ward off evil spirits.