What Does a Dolphin Symbolize

Having a Dolphin as your Spirit Animal (Totem Animal)

As a ‘spirit animal’ or ‘power animal’, the dolphin guides you to generate your spirit and voice by effectively communicating with the outside world. It also keeps you connected with nature, as well as its vibes and messages.

Like the dolphin, you impart the lesson of love and affection, acting both as an anchor (holding in place) and a bridge (connection) between you and the child inside your heart.

The esoteric dolphin-energy in you helps you meditate upon your existence, breathe in and out peacefully, arrange your senses in order, and realize your ‘self’ like in the yoga. You are connected to salvation.

Like the dolphin, you love to play, which is something healthy. Thus, you symbolize both spirituality (the metaphysical or mystical aspect of the mind), as well as the power of healing.

Just like dolphins have the ability to scare away the dangerous sharks and keep a swimmer safe, you are also capable of protecting and defending yourself and other by warding off the ‘sharks’ of vices, making it possible to swim through the sea of life safely.

All these characteristics and attributes of dolphin in you make you the conferrer of completeness of your own body, mind, and soul. 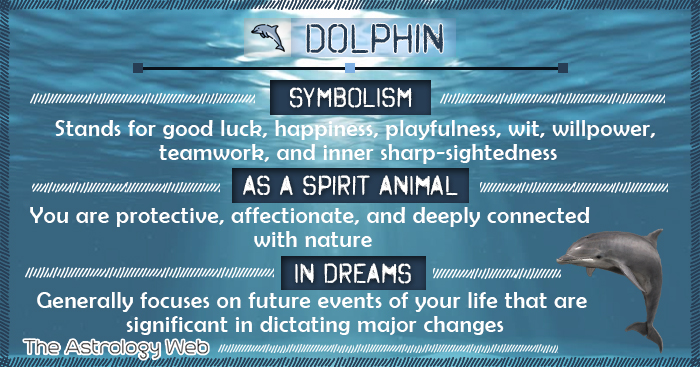 What does it mean when you Dream of Dolphins

Dreaming of a dolphin attack or a bite from a killer dolphin symbolizes that time has come for you to confront the forces that are acting as a hindrance to your progress, or realize your goal.

Similarly, encountering and killing a dolphin means that by now, you have gained the confidence to overcome some evil. At this stage, you should go ahead with your endeavors in life.

A dead dolphin signifies despair and frustration, arising from your feeling of hopelessness of not being able to connect to people or your dear ones.

Diving or swimming with a dolphin relates to one’s emotional states of balance, while the meaning of both whales and dolphins swimming together in a pod or group is that, you have a carefree attitude within you, which is being guarded by an authoritative figure.

Kissing a dolphin in your dream signifies sufficiency or abundance, appreciation from others, and esteem.

Dream of a female dolphin giving birth is suggestive of welfare and some unexpected benefits waiting to emerge successfully from a project.

If you specifically see a bottlenose dolphin in a dream, it signifies a strong connection in your relationship. It symbolically points to the fact that, the dreamer is being unable to take a static decision about someone he or she has fallen for.

Seeing a baby dolphin in a dream symbolizes that it’s time for you to stop getting tensed by minor vicissitudes of life and nourish your inner joy.

A pink dolphin in a dream means sweetness in general, relating to your feelings of ecstasy, affection, and love.

A blue dolphin stands for relaxation or peacefulness in your present state of mind.

A black dolphin (especially if it is sick) signifies that there may be a flaw in the path to your spiritual guidance.

A white or albino dolphin, in turn, represents a lofty level of your spiritual standing, and that, the path you are following is a noble one.

Spiritual and Symbolic Analysis of Dolphins in Different Cultures and Religions

‘Shishumara’ is a constellation that resembles a diving dolphin, and is located near the region of the Ursa Minor, orbiting the primeval polar star (known as ‘Dhruva’ in Sanskrit, a devotee of Vishnu). Shishumara is considered as a phenomenon of Lord Vishnu, upon which the yogis meditate.

The carriers or celestial vehicles (‘vahana’) of the Hindu river goddess Ganga (Ganges), as well as the cosmic water deity Varuna, are the ‘Makara’. Most scholars identify this mythical creature with the Gangetic dolphin (found in the waters of the river Ganges) or else, the South Asian river dolphin.

The Makara, again, is the tenth (out of twelve) zodiac sign in the Hindu/Vedic astrology. It corresponds to the western zodiac sign Capricorn (the sea-goat).

In Christianity, dolphins play a significant symbolic role, directly depicting the ‘Son of God’ – Christ. It is believed that the dolphins carry the souls of the dead to paradise. This belief, however, seems to have been borrowed from the Pagans who would inscribe dolphins on the graves of the deceased with the same belief.

Since dolphins were often seen appearing alongside ships, they came to represent Christ, who protects and guides the seafarers through the fathomless ocean.

Islam connects dolphin with prosperity and virtue. Seeing a dolphin in the dream is a religious symbol of success, good luck, and fulfillment in life. On the contrary, viewing a dead dolphin in a dream is a bad omen, since the dreamer might then lose a loved one, or a person or acquaintance close to him.

To ancient Greek and Roman sailors, these mammals were a symbol of guidance and divine protection since they would help them by surfing the bow waves of ships at sea. In Greek myth, the Assyrian goddess Atargatis, the deity of fertility and the underwater world, is associated with the dolphin.

Dolphin figures were a sacred symbol in both Greek and Roman alchemy – the ancient metallurgical science.

The ancient Sumerians would associate the male water deity Ea-Oannes with dolphins. Also, the creation stories of the Dogon tribe, residing in West Africa’s Mali, revolves around dolphins as well as other fish-like beings.

Even today, many other Native American tribals consider these marine mammals as their totem animal and associate them with different shamanic rites and charms.

The Feng Shui recommends installing dolphin statues inside the house as a powerful symbol of protection.

Because the early Celtic people were mostly sailors and had to travel through the sea frequently, they viewed the dolphin with high esteem and reverence as a symbol of friendship, intelligence, and good luck since the animals were thought to be guiding and helping them move through the waves safely.

In Hawaiian traditions, different spirit animals play an important role as the spirit guide of each individual. The dolphin, known as Nai’a in the Hawaiian lore, represents the energy of unconditional love because of its equal love for both the same and the opposite sexes.

Since dolphins have been studied practicing homosexuality or bisexuality as well as have a phallic shape, they have been symbolically connected with the contemporary gay cultures, mostly in the western world. A dolphin tattoo, body art, and different accessories (including crystal jewelry, pendants, necklaces, nose or finger rings, earrings, anklets, and bracelets) have become quite common and popular gay symbols.