What Does a Dragon Symbolize

Having a Dragon as Your Spirit/Totem Animal

Having a dragon as your spirit guide means you are fierce and confident in everything you do.

You never hesitate to speak the truth and may turn dangerous for those who are not in your good books.

You are passionate, with an innate wisdom that enables you to think, speak and act readily.

You do not waste your energy in inconsequential things and thrive to triumph under all circumstances.

You like going with the tide and also nourish a humorous soul. 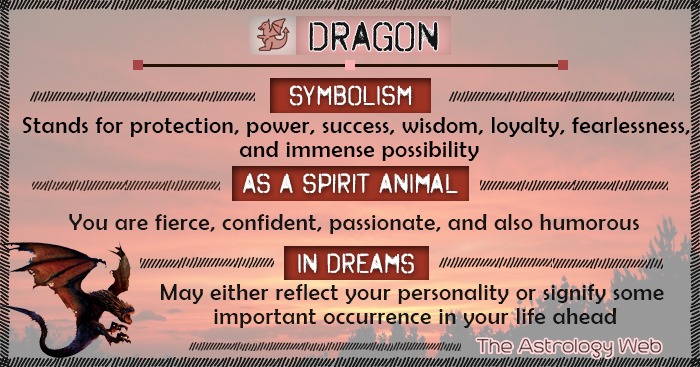 What Does it Mean When You Dream of Dragons

There are different analyses of dragon dreams, ranging from reflecting your personality to being a comment upon some occurrence in your life, or an indication towards some upcoming event.

The most prominent difference between the symbolism of dragons in the Eastern and Western cultures is that in Asian countries the mythical animal is seen as a benevolent creature, while in the European countries it is portrayed as evil and malevolent.

According to the ancient Chinese, a dragon stands for energy, good luck, heroism, nobility, courage, vitality, and happiness. A jade dragon signifies happiness, fertility, and immortality. In feng shui, a dragon and tiger symbolizes the opposing energies of yin (female) and yang (male), and together help to achieve the balance of power. Chinese folklore claims that dragons emerged from under the earth’s surface during the second month of the Chinese calendar, to shower the gift of rain and thunder.

The mythical Japanese dragon Ryu, commonly portrayed with three claws is thought to be the male counterpart of a Phoenix, representing the perfect balance needed for a happy marriage. Ryu also stands as a symbol of wealth, and power, often associated with the Gods of rain and thunder.

A dragon is believed to have specific attributes on the basis of the element it is associated with, like a fire dragon symbolizes creativity, reasoning powers, and leadership, while a water dragon stands for depth and passion. An earth dragon embodies power and riches, and an air dragon represents insight and inspiration

According to Greek mythology, dragons were often the guardians of some great treasure, with stories of dragon-slaying heroes like Apollo, Cadmus, and Perseus still being widely known. In general, European folklore looked upon dragons as symbols of ferocity and wickedness.

Since dragon stands for action, it is also one of the basic symbols in alchemy, representing making something happen.