What Does an Eagle Symbolize

Both bald and golden eagle, being among the largest birds, symbolize power and freedom – the stamina to unearth your capabilities and the liberty of choosing your destiny, all by believing in yourself. An eagle stands for dawn, spring, and rebirth, indicating the blessing of a new beginning along with the hope of realizing your dreams. A depiction of an eagle fighting with a bull or serpent reflects the eternal triumph of good over evil.

Having it as Your Spirit/Totem Animal

To have an eagle as your totem animal means that you are focussed on your goal, yet adventurous, vibrant and keen to experience everything with delight.

But as much as you are daring, you are equally grounded and benignant in thinking of others and providing solutions to their problems.

You have divine wisdom, insight and you follow an enlightened path.

You do not believe in outdated habits and ideas and use your energy for maximum outcome.

You possess sharp eyesight like an eagle that enables you to have a clear understanding of past, present, and future and you can execute every work with accuracy.

Just as an eagle manifests its acute sense of time by grabbing its prey at the surest opportunity, so too, you are a master of correct timing – you never miss chances and dazzle all by your fascinating insight. 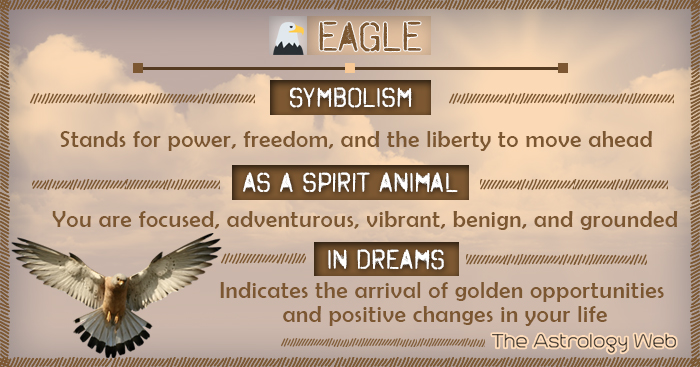 What Does it Mean When You See an Eagle

Its flight signifies that it’s watching over you like a protective guardian and beckoning you to be humble and modest.

If you see a bald eagle landing, it means that either you will receive an important message from someone, or your long journey will be over.

What Does it Mean to See an Eagle in a Dream

There are a number of interpretations and symbolism associated with eagle dreams. But, generally, seeing a golden or bald eagle in your dream is associated with the arrival of golden opportunities and positive changes in your life.

Christianity and the Bible

With its strong and broad wings, an eagle stands for man’s belief and trust in God. It is also the symbol of John the Evangelist, standing for the exalting light of intellect. The ability of an eagle to steadfastly look at the sun while soaring symbolizes Christ’s unwavering faith.

A popular story in the Aztec culture holds that their ancestors were instructed by God to settle at a place where they would find a particular eagle, mounted on a cactus and devouring a snake. This area today is Mexico, with the image of an eagle swallowing a serpent adopted as its coat of arms. Symbolically, it stands for celestial power, ushering light in man’s life.

An eagle, serving as the universal symbol of the God of the sky Zeus/Jupiter, often occurs in the form of a transformed man.  In fact, the word ‘eagle’ comes from Aquila, the winged carrier of Zeus’s thunderbolts.

The Greeks held that an eagle was a messenger to Zeus who occasionally transformed into the bird to carry his lover, Ganymede to Mt. Olympus.

The Eagle is the God of light Amun-Ra (or the Sun God Horus), symbolizing wisdom. Alternately, it stood for courage, power, and immortality.

In India, the symbolic eagle of Vedic mythology is Garuda, the serpent-swallower that often serves as transport of Vishnu and is known to have fought with the snake, Kalia.

A double-headed eagle is one of the most prominent emblems of the Freemasons.