What Does an Elephant Symbolize

The magnificent elephant is a symbol of power, hardiness, dignity, wisdom, kindness, loyalty, leadership, confidence, patience, tranquility, honor, and royalty. True to its strong structure, an elephant as a spirit animal gives you the energy to finish off any task without any delay.

What Does a White Elephant Mean

Having an Elephant as Your Spirit Animal (Totem Animal)

Having an elephant as a totem animal means you are a soft-spoken person, filled with affection and love for others.

Whether at home or workplace, you are always ready to handle responsibilities, holding yourself accountable for your mistakes. Just as the elephant tribe comes to help, when one of its members is injured, at the cost their own lives, you too have an innate sense of duty.

Extremely caring towards children and elders, you tend to get defensive when provoked.

A gregarious person, you can build and maintain strong networks with others. However, you are not the typical socialite, but enjoy having meaningful conversations within your circle.

Using your strength and courage, you can cross any hurdle and come out as a winner. If necessary, you will never hesitate to take up the role of a bread winner in your family as an elephant is known to be a natural provider.

Your judgmental mind makes you a deep thinker and helps you come to a rational conclusion. Gifted with a sharp memory, you attempt to recollect all the beautiful memories from life whenever you lose hope.

You are highly ambitious, leaving no stone unturned to turn even the most far-fetched dreams into reality. 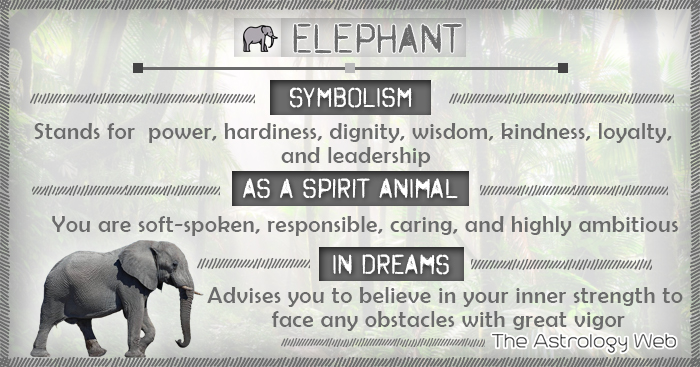 What Does it Mean When You Dream About Elephants

Seeing an elephant in your dream may have a host of meanings, indirectly advising you to believe in your inner strength to face any obstacles with great vigor. It is often a reminder about some important thing in life that you have completely forgotten.

Coming across a herd of elephants in your dream signifies that you are making good social decisions with your community.

A dream where you are riding an elephant is a sign of overcoming the challenges and fears by dealing with them instead of running away. Similarly, a running elephant foretells that you are preparing to fight all the problems in your life.

Getting attacked by an elephant is a revelation of your wild side that you might want to show to everyone soon. On the contrary, being chased by an elephant suggests that you are trying to avoid a situation or person.

To dream of a rampaging or stomping elephant indicates your passions are going out of control.

Saving an elephant in a dream means you are becoming more responsible towards your near and dear ones.

Seeing an elephant getting killed is a symbol of monetary troubles.

Shooting an elephant reveals your tendency to speak behind people’s back.

If you are bathing an elephant in your dream, it may represent purification of the mind by driving out all the negative thoughts.

Dreaming of an elephant spraying water is a hint that you are becoming complacent about yourself, not willing to learn a new skill.

To see an elephant giving birth signifies your views and opinions that you want others to know for bringing major changes.

A drowning elephant is a warning of someone’s death in the future.

A rogue elephant turning up in your dream stands for a disappointment you are likely to face in the future.

A raging elephant states an emotional turmoil that’s going in your mind.

A dream featuring a dying elephant implies that you are clinging onto unpleasant memories instead of making a fresh start in your life.

Eating an elephant in your dream forecasts that you will receive financial funds from a government body.

An elephant playing with you points to your lively nature.

A flying elephant means that you are being criticized for following your dreams.

A dream where elephants are fighting with each other is a sign of frustration and anger.

A floating elephant in the ocean signals a desire to get away from your routine life and follow a different path. On the other hand, an elephant underwater expresses a feeling of being overwhelmed due to personal commitments.

An elephant on fire stresses the need for improving your relationships.

An elephant flapping its ears in a dream means that you are not serious about your business or work.

A dream about an elephant swimming in water discloses your ability to control your emotions in different circumstances.

Watching an elephant stampede in a dream relates to going against the grain in society.

Dreaming of a baby/little elephant may indicate a minute problem in your life that could get bigger in the future if ignored. While saving a young elephant symbolizes preventing yourself from getting involved with dishonest people.

During pregnancy, the appearance of elephants in dreams reflects the physical and psychological changes you are going through.

Being pregnant with an elephant in your dream is a message that you are no longer able to handle stress and to look for a way out.

Noticing a three-legged elephant in your dream suggests thinking about some insignificant issues.

Seeing the dung of an elephant means gaining profit or wealth from a higher authority through hard work. However, if the dream shows the poop of a baby elephant, it is a symbol of financial loss.

Meaning of a Dreams with Different Parts of an Elephant

The eyes of an elephant in a dream reflect your narrow-mindedness.

Seeing an elephant’s feet gives an inkling about your preliminary plan to gain success and wealth.

The head of an elephant is an indication that you are getting bogged down due to certain adversities.

If you happen to see an elephant trunk, it symbolizes the urge to fulfill your physical needs.

The tusk of an elephant describes a desire to look physically attractive for seeking attention.

The bones of an elephant showing up in your dream suggest you to be more patient with others.

Significance of Different Colored Elephants in a Dream

A white elephant is a symbol of magnificence and good fortune.

A dream of a pink elephant suggests cordial meeting with old friends.

A red elephant is an early sign of an unpleasant event that might occur in the future.

Dreaming about a yellow elephant is a warning that you stop over spending.

Seeing a purple elephant in your dream reveals the things you have been maintaining with money.

A green/jade elephant marks a change of place for your career growth.

A gold elephant showing up in your dream means great luck.

A gray elephant is associated with difficulties and your daily struggles.

A dream with an elephant statue denotes recognition of your innate qualities.

Tattoos of elephants appearing in your dream refer to a life event that has etched in your memory.

Spiritual and Symbolic Meaning of Elephants in Different Cultures and Religions

According to the Catholics, an elephant stands for purity as it shows no sign of passion. In the biblical Apocrypha, elephants have been considered as engines of battle.

The elephant has a spiritual significance in Buddhism based on the belief that when Lord Buddha’s mother was pregnant with him, she dreamt of a white elephant giving her a white lotus from its trunk and then circling three times before entering her womb.

Since Thailand is a Buddhist country, its royal navy flag carries the symbol of a white elephant.

The African elephant is a representation of stamina and power. About 1,200 years back, the Africans would make a bracelet from the hairs of an elephant and wear it to drive away illnesses and bad luck. In the pre-Alexander era, the Egyptians used elephants as war animals.

In Hindu culture, the elephant is depicted as Lord Ganesh, an elephant-headed deity, and therefore considered as a holy animal.

The Chinese pronounce elephant as “Hsiang” which means wealth and prosperity. According to Feng Shui, keeping symbols or figurines of elephants with a trunk up signifies taking up good luck, while the ones with trunk down represent fertility, love, and protection.

The elephant has been depicted in the stone carvings of Angkor. Nearly 2,000 years ago, every village had a huge parade of elephants that were tamed and made to work.

The elephant has been used as a piece in many strategic games like Japanese Shogi.

The elephant for several centuries served as a powerful war wagon of the Middle East.

According to Mahavamsa, the epic poem in the Pali language, in the 6th century BC, the kings would capture and train elephants. The major ethnic group in Sri Lanka holds the elephant as a quasi-sacred animal.