What Does a Falcon Symbolize

The bird of prey falcon symbolizes speed, superiority, determination, loyalty, strength, wisdom, freedom, focus, ambition, and aspiration. As a solar symbol, it defines victory and the ability to rise above all situations.

A Peregrine Falcon takes its name from the Latin, “Falco Peregrinus” meaning a foreigner or a stranger, for it is known to undertake long migrations. Seeing a Peregrine Falcon may symbolize a need to recognize your wandering spirit.

Having a Falcon as Your Spirit Animal (Totem Animal)

To have a falcon as your totem animal means you think quickly and act fast. You seize every opportunity that you contend would benefit you in the long run.

You also have the required patience to linger for reaping the greatest advantage that can be derived out of a particular chance. You work strategically and calculate everything before embarking upon something.

You have an independent spirit and need to remain in seclusion to find happiness.

Your determination to stay steadfast to your dreams leads you to overcome all odds, and you are always ahead of your friends in most spheres of life.

You lead a meaningful life that fosters evolution, striving to induce positive changes. 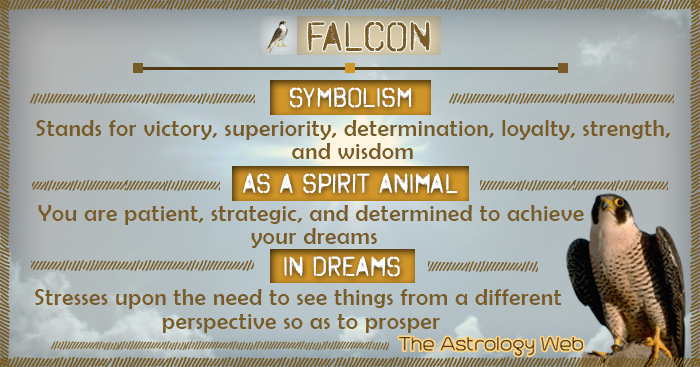 What Does it Mean When You See a Falcon

If you see a falcon flying, be sure that you need to be more careful in your life. There may be many opportunities for you, but it is important that you recognize their individual worth and then take action swiftly.

What Does it Mean When You Dream About Falcons

Dreams of falcons, in general, suggest that you need to see things from different perspectives to overcome challenging situations in life.

Seeing a flying falcon in your dream means that success and prosperity are on your way. If the falcon flies down, then it implies that you are going to face difficult situations.

A falcon over your head hints that you might be attacked by your enemies or competitors.

A dream with a dead falcon suggests that you have finally got rid of your enemy and now can indulge in recovering yourself from any conflict.

Seeing a caged falcon stands for feelings of boredom that you need to throw off to attain a life of total freedom.

Seeing that you are catching a falcon suggests that you would soon taste some pleasant situations.

Dreaming of a black falcon means that you are not able to achieve the success you want. Seeing it talking to you also bears the same meaning.

A falcon attacking and catching its prey means that all your financial worries will subside.

Seeing a falcon in your dream may symbolize victory over your enemy or love towards family members.

If you see that you are holding a falcon in your dream, then it is a hint that your child would be victorious in future.

Spiritual Meaning and Symbolism of Falcons in Different Cultures and Religions

The Egyptian symbolism of falcon is associated with the rising sun. It also embodied the God of the sky, hunting, and war “Horus”, and the God “Ra.” It was believed that “Horus” appeared assuming the shape of a “falcon-headed god” and he had the ability to see everything for having the sun and the moon as his eyes.

In the Bible and Christianity

A wild falcon symbolizes an unconverted soul with degraded intentions, while a tamed falcon embodies a converted one, seeking lofty ideals.

For Native Americans, a falcon, residing in the “Upperworld” with the sun and moon symbolized light and order.

In Japan and China

Both the Japanese and the Chinese looked at a falcon as a symbol of power, vision, and boldness.