What does a Fox Symbolize

A Fox symbolizes mischief, opportunity, playfulness, agility, cleverness, wisdom, beauty, luck, curiosity, charm and physical and mental responsiveness. Aided by cunningness, it manifests its increased awareness in being able to see through deceptions.

Fox Symbolisms According to Color

Arctic or Albino Fox: Symbolizes purity, divinity along with magic amidst ordinary things.

Having a Fox as Your Spirit Animal (Totem Animal)

To have a fox as your totem animal means that you are blessed with analytical thinking powers, keen observation, and perfect deduction. You are always mentally alert, so most of your actions are executed swiftly and smoothly.

Just as a fox is most active at night, you too share a great affinity with the nocturnal world and exhibit your creative powers entirely during nighttime.

Being adaptable, you do not face problems in triumphing over unexpected problems. The way you solve any issue marks your creativity and wit. But, though this allows you to share small talk with those around you, it does not indicate that you enjoy the attention.

You are loyal and love taking an active interest in those around, but may even pass unnoticed in any company or society.

You are endowed with a keen sense of humor that you often find tough to control. And in case any unpleasantness occurs, you are quick enough to camouflage it using your sharp energy. 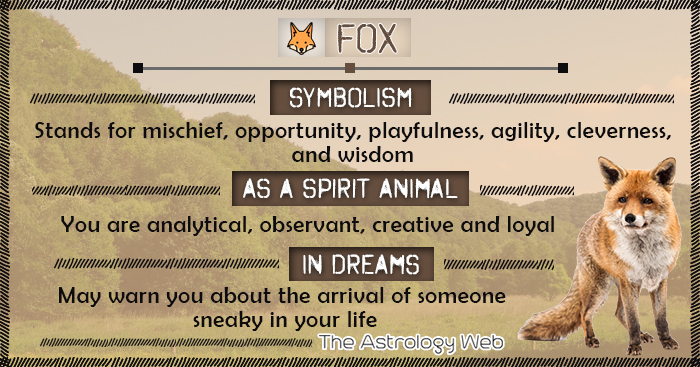 What Does it Mean When You See a Fox

Seeing a fox is a reminder for you to be discerning of people or circumstances that may be deceiving you or causing your downfall. It seems to grant you wisdom, especially when you need to find the best solution regarding love or business relationships.

Is it Good Luck When a Fox Crosses Your Path

If a fox crosses your path, be sure of gaining something in future. You just need to open your eyes and look forward to it.

What Does it Mean When You Dream About Foxes

Dreams about foxes may either reflect your characteristic traits of shrewdness and insight or serve as a caution regarding the advent of someone sneaky in your life.

Chasing a fox in your dream suggests that not being in tune with reality, you are aggressively indulging yourself in risky and passionate associations.

A dream about killing a fox indicates that you have successfully overcome a threat. If you see a dead fox, then you are surely going to triumph over a cunning enemy.

Seeing that you are holding a fox’s tail implies impending financial loss.

A baby fox stands for prosperity in your career. A fox cub also suggests unity and concord.

Dreaming of getting bitten by a fox on your face or finger implies that someone you believe in may cause you pain. A fox flying out of the window also warns you to be alert of those you trust.

A fox with a human head signifies that you may welcome some crafty person in your life.

A fox attacking you stands for the change you need to make so as to grow in life.

If you see yourself playing with a fox, or hear a fox’s cry or howl,  it’s a warning of approaching danger.

Dreams about friendly foxes look forward to a romantic affair that has chances of being short-lived.

Seeing yourself as a fox hunter, preparing to go hunting on foot, points at your risk-taking ability.

Dreaming about a fox hunting rabbits signifies that you may face disappointments ahead in life.

Fox Dream Symbolism According to Gender

For Men: If a fox runs into a hole in the dream, the dreamer will find himself conversing easily with his friend.

For Women: Dreaming of a running fox foretells happy changes.

Seeing a red fox in a dream suggests that you will soon come to know a person who has harmed you in the past. It may also mean rivalry in love.

If you see a white fox, be prepared to get confused by and face evil people.

Fox Spiritual Meaning and Symbolism in Different Cultures and Religions

The ancient lore of Native America depicts foxes by the observations of two distinct tribes; the Northern tribes and those of the Plains. Consequently, foxes are given different attributes – the former sees them as wise messengers, while the latter regard them as tricksters.

Foxes are associated with great healing powers among the Hopi and Cherokee tribes in North America. On the other hand, the Apache people hold that they are responsible for introducing humans to fire.

Qualities like effortlessly traversing the world of spirit and the earthly plane, as well as complete knowledge of surrounding woods, made the Celts look upon foxes as their guides and respect them for their wisdom.

Here, a fox, with its crafty nature and constant prowling habit, is seen as symbolizing Satan.

According to some ancient Chinese stories, a fox sighting is believed to be a signal from spirits in the afterlife. Other stories present a fox as a shapeshifter that, changing variously into a plant, female or other creatures, tempts men of weak nature to drain out their energy.

In Japanese culture too, foxes are seen in two different ways; on one hand, it is believed to represent a rain spirit and messenger of the rice deity, Inari, while on the other hand, it is looked upon as a wise and magical being. One myth also presents it as a harbinger of the goddess of rice, Shinto.

According to Shamanic beliefs, fox hunting symbolizes the rooting out of old traditions by new ideas.