What Does a Giraffe Symbolize

The spiritual meaning of a giraffe, the placid power animal, is anything but ordinary. Also called ‘Africa’s gentle giant’, the giraffe symbolizes grace, peace, individuality, protection, communication, perception, and farsightedness.

Having a Giraffe as Your Spirit Animal (Totem Animal)

If the giraffe is your totem animal, it signifies your majestic beauty and regal aura.

Your excellent vision in terms of foresight and clairvoyance is a result of your spiritual reach, which can be equated with the giraffe‘s enhanced sight of the horizon and into the future owing to its prominent height.

Your ambitiousness and consequently, your commendable tendency to reach the heights you set your eyes on alludes to that of this tallest terrestrial creature.

You have a naturally shy disposition and are a person of few but measured words, much like the mighty giraffe which barely makes a sound.

However, you also possess strong communication skills and the power of eloquent speech, which is not surprising considering the giraffe’s 20-inch tongue.

Your perception and intuition, impeccable powers of observation can be attributed to the giraffe’s small protruding third horn, emblematic of its third eye.

Although primarily non-violent, your protective nature and resourcefulness come into play when you need to defend yourself or those you hold dear, reminiscent of the giraffe’s long legs and thick protective eyelashes.

Distinctiveness is yet another asset you possess, as the fur patterns of no two giraffes are alike.

You also invariably tend to conduct yourself with an effortless poise, patience, sure-footedness and elegance. 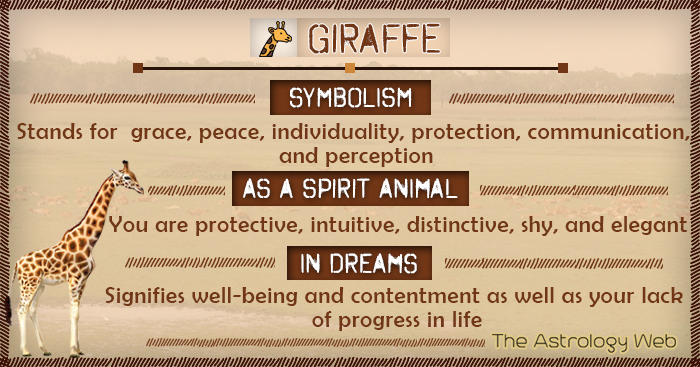 What Does it Mean When You Dream About a Giraffe

While it could be deemed rather unusual to dream about the elusive giraffe, there are still several interesting interpretations of such dreams. In general, a giraffe dream signifies well-being and contentment. It could, on the flip side, be representative of your lack of progress and resultant dissatisfaction with it.

It might insinuate that you feel the need to aim and reach higher in life, and for that, you need to work harder. On the other hand, it may even be meaning that you should focus on setting more realistic goals for yourself.

Taking into consideration the physical attributes of the giraffe, the dream could be denoting how you are or should be ‘sticking your neck out’ for someone in your life and should analyze its feasibility.

Dreaming of a giraffe sprinting either implies that you are avoiding the truth and are in denial or that you witnessed something that you weren’t supposed to.

A giraffe roaming about in the open air is a bad omen, pointing to the possibility that you and your partner aren’t on the same page in your relationship, which may soon end as a result of your partner’s infidelity.

Riding a giraffe in a dream suggests that you are selfish and are being inconsiderate of those around you.

A giraffe with its head bowed down is auspicious, for someone you believed didn’t hold a high opinion of you may end up throwing you a bone.

A baby giraffe may symbolize beauty and achievement in your child’s future.

In Islamic culture, a giraffe dream may denote an approaching loss in business or health issues. Contrarily, it may point towards some welcome news from someone close or even from a foreign land.

Symbolic and Spiritual Meaning of Giraffe in Different Cultures

The strong symbolism of the giraffe in African culture is yet to be surpassed, wherein it has always been perceived as a magical creature and is still revered as a sign of uniqueness and achievement. In earlier times, cavemen in and around Africa were seemingly mesmerized by the giraffe, whose illustrations were often found in various caves.

According to African folklore, the giraffe originally had a short neck but was blessed with a longer one by a witchdoctor so it could reach the lush green leaves of the tall trees after a terrible drought made the grasslands and rivers dry up.

Christianity preaches how the children of God should look upon giraffes and imbibe its many admirable qualities. Just as the peace-loving giraffe stands taller than all else, so should Christians rise above, renounce earthly desires and focus on the heavens high above. It also urges its people to have a magnanimous heart and use their foresight and knowledge for the welfare of others.

Interestingly, the Book of Genesis and the first book of the Hebrew Bible mention the presence of giraffes on Noah’s Ark.

In Chinese mythology, the ’Qilin’ is a hooved chimerical beast, which is essentially a stylized avatar of the giraffe whose initial references date back to 5th century BC. It was considered as a good omen, associated with the inevitable rise to power or death of an eminent monarch or a sage.

Moreover, according to Chinese feng shui, giraffe figurines stand as symbols of friendship.