What Does a Groundhog Symbolize

The groundhog is the symbol of good luck, family, community, balance, happiness, loyalty, and generosity.

Having a Groundhog as your Spirit Animal (Totem Animal)

You love to ‘burrow’ deep through the facets of knowledge – any subject that pertains to learning, studying and researching.

You know how to create your own boundaries and respect others’ too.

You are not afraid of work or are lazy. When you see a long recess coming your way, you work even harder to cherish the moments of leisure, later.

As a Groundhog-person, you are highly sensitive as also, instinctive, and can smell any impending danger quickly, but do not take time to express your dissatisfaction.

Just as a groundhog is a familial and gregarious being, you too have a bonding with your family and the community. You neither ignore them or the primary responsibilities you owe to them nor disregard any favor they extend.

You are also quite a philosophical or spiritual person, who would often seek the truths of life, the cycles of birth and death, or those of creation, sustenance, and obliteration. 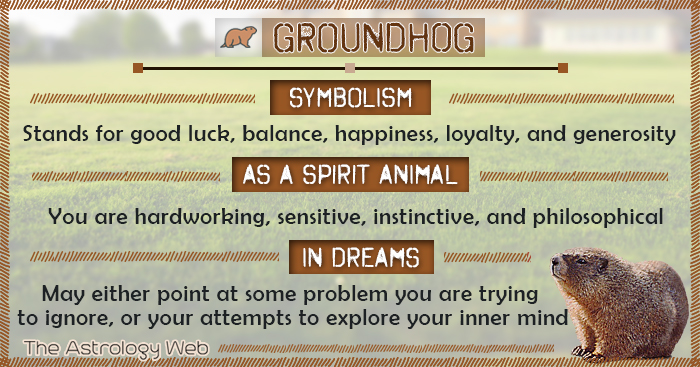 What does it mean when you Dream about Groundhogs

A groundhog in a dream signifies that you have been trying to keep the subjects of fear at the back of your mind, and have always wanted to ignore them since you are not ready to face them. It tells you that it’s time for you to sit erect and feel brave, since sitting in a corner, gnawing, will not solve any problem, unless you face them in real life.

It suggests that you are trying to dig in through your subconscious mind to be sure about the things of fear and distress and find ways to deal with them.

Another interpretation may be that you have a suppressed talent which is trying to find a way out in order to unfurl itself to the world. So, it’s time you should work on it before you lose the opportunity.

Spiritual and Symbolic Meaning of Groundhog in Different Cultures and Religions

The Alaskan Tlingit people have a symbol of their clan that pertains to the groundhog. It is called the ‘Groundhog Crest’, though the animal that is portrayed in the totem is a hoary marmot, a close relative of the groundhog.

New England’s Wabanaki tribe has a mythological groundhog character in the name ‘Grandmother Woodchuck’. This figure is depicted as an elderly lady, who is wise and patient, and imparts lessons of moral knowledge to those who are good by nature. Interestingly, this character has also been adopted by the Canadian Maritimes.

The indigenous Cherokee Indian people from the Southeastern Woodlands of the US also have a dance type of their own, which is known as the ‘Groundhog Dance’.

Celebrated on February 2, each year, the Groundhog Day is an ancient and traditional American holiday (but also in Germany and Canada). It began from the belief about how a groundhog’s way of emerging from its burrow decides whether the spring has already arrived, or the winter is yet to persist for the next six weeks.