What Does a Jaguar Symbolize

Having a Jaguar as your Spirit Animal (Totem Animal)

If you are an individual born under the jaguar totem, you have great power with such an aura around you that both intimidate as well as impress everyone. You are always the center of attraction and stand alone in a crowd.

Even though this spirit animal endows you with power, this totem can create a lot of problems as well if the power is used in a wrong manner. So it is essential for you to use the power rightly, or else you are vulnerable to losing everything in your possession, including your loved ones.

As a jaguar-individual, you are strong and courageous both physically and mentally. Once you vow to do something, you will only stop after you attain your goals. This is undoubtedly a positive characteristic since it can yield excellent results. You can meet with success and fame in your life, as also, can influence others easily.

If you are a ‘jaguar’, you are also a protector of the feeble and the down-trodden. You can’t stand injustice, and often raise your voice to seek punishment for those who fail to be just towards others. 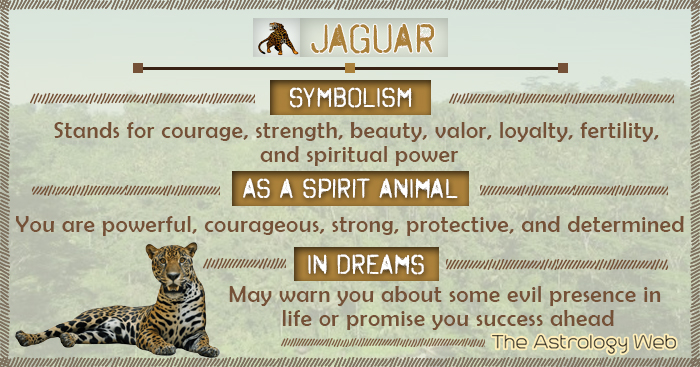 What does it mean when you Dream about Jaguars

Dreaming of this big cat standing very close to you comes as a warning that there is someone you know (from your workplace, friend circle or acquaintances), who is waiting to cause you some harm or force you to do something against your will. You should be careful.

If you dream that a white jaguar has reached very close to your face, this might be an evil symbol, since, then, you might meet with some major personal issues in life, which you need to solve urgently.

Killing a jaguar, or a jaguar running away from you, is a good omen, meaning that you are about to emerge as a victor in some important event in your life – be it winning a legal case, or getting a promotion, or even find a good solution to some old financial issue with your business partner.

If you are petting a baby jaguar in your dream, take it as a message that you are trying to please the people who are giving you stress and anxiety, rather than confronting them and finding a permanent solution to these problems.

A black jaguar that attacks, chases or bites you can be interpreted to represent your inner conflicts which are about to come out and stand face to face with you. The conflict is usually with a superior character in your life (like the boss), and the consequences might not be good. Hence, be calm, use your brain before taking decisions, and look before you leap.

Spiritual and Symbolic Meaning of Jaguars in Different Cultures and Religions

In Aztec and Mayan Cultures

History says that jaguars were revered as gods in Mexico, Peru, and the entire pre-Columbian America. These large cats were just next in divine line to the serpent gods of the Aztec and the Mayan people. According to Mayan shamanism, the realms of the underworld are ruled by jaguars. Thus, the Native Americans would not merely worship these animals, but also feared them with veneration. Both these tribes erected large temples in honor of jaguars with their symbols and images inscribed on them that are found even to this day.

The Matsés or Mayoruna tribe from South America identify themselves as ‘Jaguar people’. They tattoo their faces and body with jaguar markings to draw resemblance to the animal. To them, this powerful beast was the symbol of war and warriors. A few priests from their community are said to attain the state of the jaguar, whom they consider as highly respectable, while these priests themselves become incredibly influential to the others.

The Romans considered this feline as a symbol of bravery, strength, and power. They connected this creature with Bacchus, their god of wine, merriment and secret desires (equivalent to the Greek god Dionysus). The Roman myths tell the story of how these large cats raised Bacchus, and how they would also pull his chariot. Thus, jaguars also represented the urges and desires hidden deep inside the human mind.

In the world of modern-day tattooing, jaguar plays a significant role. They have become a popular choice for tattoo lovers who paint this animal on their bodies as a symbol of strong-mindedness and as an expression of hidden desires.

Author Rudyard Kipling’s work ‘The Jungle Book’ has been made into a number of animations, feature films as well as, television series. One of the central characters in the story is a black jaguar named Bagheera, who is a friend to the protagonist Mowgli, a little jungle boy. Bagheera is not only brave and strong, but also the protector of the jungle, and is respected by everyone.