What Does a Lizard Symbolize

A lizard is a symbol of sensitivity, clairvoyance, regeneration, imagination, adaptability, vibrancy, change, detachment, variation, introversion, spontaneity, tenacity, spirituality, and cleverness. As a spiritual guide, this secretive reptile suggests you dream big whenever you are caught up with the daily drudgery of your life.

Having a Lizard as Your Spirit Animal (Totem Animal)

To have a lizard as a spirit animal means that you have the power to renew relationships as well as any long-lost work. Come what may, you are fearless enough to face the reality.

You responsibly do your duties to keep everyone happy and never hesitate to take initiatives regarding a personal or professional affair.

Gifted with an innate ability to sense danger, you can quickly remove yourself and others from an unpleasant situation.

You pay keen attention to your environment and maneuver your skills for personal achievements.

Your constant effort to stay self-sufficient gives you the energy to repeat a task in a cycle till it’s accomplished. However, if you get used to repetition, it might make you unproductive after a while. 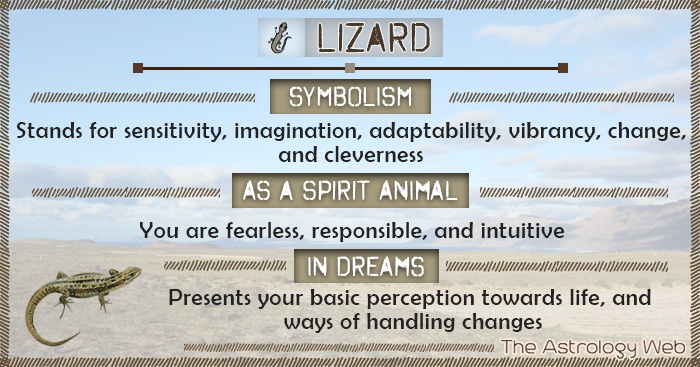 What Does it Mean When You Dream About Lizards

Seeing lizards in your dreams represent your basic perception towards life and your way of handling changes.

Getting attacked by a lizard indicates that you will face some obstacles from a close one.

A lizard biting you or your finger in a dream predicts hardships in your life.

The appearance of a lizard without a tail suggests you sacrifice a bit for others rather than being self-centered.

A lizard falling on your head or neck symbolizes that you need to be rebellious for voicing your opinions.

Killing a lizard refers to overcoming previous losses and change in your fortune.

A jumping lizard is a sign of excitement and zeal.

To eat a lizard or find it in your mouth is a sign of gaining wealth and other material assets.

A lizard in your food in a dream signals insecurity and loneliness.

If you are chasing or catching a lizard, it means that you are ignoring your responsibilities and duties. However, a dream where you are running away from a lizard is a symbol of guilt and displeasure.

Finding a lizard on your bed implies that you are losing control or authority over someone or somebody.

A lizard crawling on any of your body parts, including your head, face, ear, back, and foot reveals the ill intentions of your friend in waking life that you need to watch out.

A lizard with wings flying represents your ability to keep everything under your control.

A lizard entering your house or toilet in a dream might mean that you want to stand next to your near and dear ones during a crisis.

A dream featuring a lizard giving birth foretells new directions in your life.

A dying or dead lizard supports your optimistic attitude and positive thinking.

A dream where a lizard is talking to you represents a turning point in your life.

A wall lizard eating a snake/frog in your dream means that you are looking for emotional attachments.

To dream of a large lizard is associated with your lack of social interaction with others. On the other hand, a little/baby lizard throws light on your inferiority complex.

Dreaming of a poisonous/venomous lizard may signify deceit, betrayal, and revenge.

A lizard under your skin could mean that you have a double mind right now.

A headless lizard points at your inability to not keep a balance between emotion and logic.

When you see a horned lizard in your dream, it could reflect your bizarre way of thinking.

A dream about a lizard tail suggests you follow a different approach to sort out the issues in your life.

The tongue of a lizard in a dream might point towards your lack of diplomacy while speaking.

Seeing the eggs of a lizard expresses your desire to play the role of a nurturer.

The poop of a lizard is a symbol of spiritual cleansing and light-heartedness.

Significance of Dreams with Different Types of Lizards

A frilled lizard brings to your notice that you need to utilize your power in a group.

A monitor lizard signifies mental clarity and a new beginning.

A dream with a common lizard advises you to go with the flow.

A skink lizard could represent your shadowy personality.

An anole lizard in your dream may encourage you to follow the true path.

To see an alligator lizard in a dream could mean that you have a problem expressing your feelings.

A black lizard discloses criticisms that you might have to hear from someone close.

The appearance of a red lizard denotes unfulfilled passions.

A green lizard suggests you keep yourself healthy and make some dietary changes.

A white/albino lizard is a sign of self-realization and enlightenment.

A dream about a purple lizard warns you about an impending event that could affect your reputation.

Showing up of a brown lizard is a way of telling you to pay close attention to your family.

To see a pink lizard in your dream indicates you to move on in life.

A blue lizard promises calmness and peace that you will soon experience.

The biblical representation of a lizard is a creature with a human face and foul temperament residing inside in a house.

According to several Native American folktales, lizards are related to masculinity, healing, and survival. Some aboriginal tribes after the birth of a baby would make an amulet in the shape of a lizard from his umbilical cord to provide protection and health.

Here, a lizard named cuetzpallin has been represented as a figure of unknown gender in the calendar.

Ancient Celts considered a lizard as a symbol of good luck, and also a spiritual guide. Coming across a lizard while on a journey is believed to be a miraculous blessing.

In Chinese art, the lizard along with four other animals is considered to be a noxious creature. The back of many cars in China bear the symbol of a gecko lizard that signifies good luck and accident-free rides.

In many homes of Hindus, lizards residing in their worship room are believed to be a mode of communication between God and devotees. The chirping of a lizard is also an auspicious sign.