What Does an Owl Symbolize

An owl symbolizes intuition, transition, wisdom, silence, observation, quick wit, independence, power, intelligence, and protection. Its ability to see in the dark endows it with the energies of the moon and night, as well as makes it symbolic of mystery, hidden knowledge, and feminine fertility.

Symbolic Significance of Owl According to Type

Great horned owl: With a tuft of feather on each side of the head, it represents a deep connection with the spirit realm, thereby showering you with support and solace.

Barred owl: Stands for vivaciousness, knowledge of personal boundary and generosity. Its dark brown eyes indicate your deep connection to the cosmos and your creative ability.

Barn owl: Suggests preserving of one’s secrets and valuables in a private place.

Burrowing owl: Reflects the magic of the earth.

What Does it Mean When an Owl Stares at You

On seeing an owl, you must pay attention to what happens immediately afterward. If something good happens then, the sighting was favorable, but if something bad happens, then it may presage some more dreadful occurrences.

What Does Seeing a White Owl Symbolize

Seeing a white owl may either bring luck and prosperity or result in misfortune and death.

What Does it Mean When You Hear an Owl

The hooting or screeching of an owl suggests that some unfortunate mishap is likely going to affect someone small in your family. It may also imply that the child would have an unhappy life.

Having an Owl as Your Spirit Animal (Totem Animal)

To have an owl as your totem animal means that you are strong willed, perceptive and a great empathizer.

Having sound intuitive abilities, you are quick to discern the real intentions behind other’s actions or motives. Thus, people cannot deceive you on any occasion.

You are also adaptable and face different situations of life with an easy going manner.

Being drawn to the dark and unknown, you prefer to work during late hours and have no dread of the occult. Naturally, people find you adventurous and exciting. 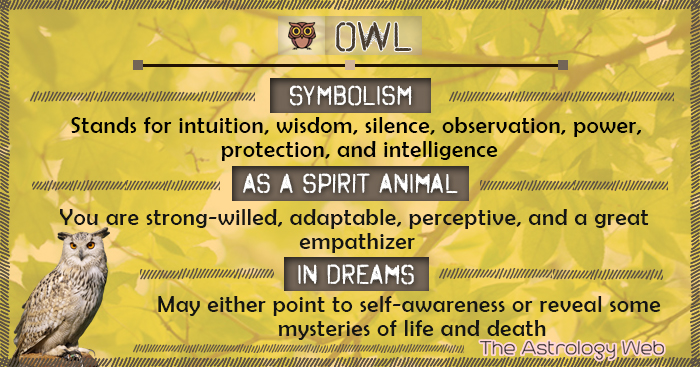 What Does it Mean When You Dream About Owls

Dreams about owls may either refer to your awakening of self-awareness or reveal some personal mysteries concerning life and death. They may also stress upon the need to let go of your negative thoughts and behavior.

Seeing an owl flying overhead is suggestive of your escaping some danger.

Hearing an owl screaming symbolizes death, material loss, and troubles. It’s hooting, on the other hand, signals your own cries of desperation.

Finding a dead owl looks forward to your averting an illness or accident.

Seeing an owl attacking you, points at your dormant feelings of being assailed. It may also indicate some major transition in your life.

An owl’s eyes in your dream are suggestive of the great recognition you crave from someone.

Seeing yourself holding an owl with your hands stands for physical harm and domestic accidents.

A dream of an owl in your house is a forewarning of money being the cause of all evil.

If you see an owl biting you, it’s a hint at someone, who by invading your space has alarmed you.

Dreaming of an owl’s feathers is a reflection of your gaining spiritual powers.

Catching or hunting an owl while it’s trying to fly away, points at the restriction that you have imposed on your relation.

An owl in water signals that luck is on your way.

A white owl in your dream promises good surprises and pleasant moments.

To see a gray owl is an indication of your facing the consequences of your past actions.

Seeing a black owl with red eyes is a warning of some mistake that you need to rectify.

An owl with yellow eyes stands for sympathy and intimate friendship.

An owl with green eyes refers to your attempts to gain recognition and claim independence.

A brown owl stands for your work that is practical and grounded.

A purple owl refers to wealth, royalty, and spirituality.

A red owl reflects your anger and passion.

Spiritual Meaning and Symbolism of Owls in Different Cultures and Religions

Here, an owl is seen from two different perspectives.  Along with calling it a “Night Eagle”, for its acute night vision, the Native Americans see it as symbolizing wisdom, foresight, and protection. Thus, they wear its feathers to ward off evil spirits. On the other hand, it is regarded as a conjuror, that being silent and fierce, foretells death.

The Cherokee Indians, besides associating an owl with their creation myth, take it to be a spiritual consultant on sickness and punishment. Some also symbolize it with death.

The Christians traditionally associated an owl with the Devil, evil powers and destruction. In fact, in the Old Testament, it features as an impure figure and one of desolation.

Resembling other cultures, Mexican people also believe that an owl symbolizes death and sickness, with its ominous cry suggesting that misfortune is close by.

Here, an owl is seen in both good and evil lights. It is believed to be a companion of the Hindu God of wealth and prosperity, Lakshmi by some, while others see it as Goddess Lakshmi’s elder twin,  Alakshmi, who brings misfortune and strife. In China too, owls are associated with death.

Here, it is held that an owl spends its day in holy solitude and the night, expressing its grief for the grandson of Prophet Muhammad, Imam al-Hussain.

To the West African and Aboriginal Australian cultures, an owl is viewed as a messenger of secrets along with being companions to seers and mystics.

The Illuminati and Freemasons

The Illuminati, assuming to be the messengers of the secret knowledge of ancient deities, regard an owl as one of their symbols, with its large unblinking eyes representative of their all seeing vision.

To the Freemasons, an owl, on account of lying awake at night, stands for reincarnation. Taking it to be a symbol of the soul of a dead person, they see it as waiting at night to enter another body that has been conceived.

According to the Greeks, Athena, the goddess of wisdom is said to be accompanied by an owl.