What does a Peacock Symbolize

Peacock Symbolisms According to Color

Golden peacock: Is a symbol of the cosmos, light, and immortality

Meaning of a Peacock Feather

A peacock feather stands for the all seeing eye, symbolizing immortality and a pure soul forever free of corruption.

Having a Peacock as Your Spirit Animal (Totem Animal)

To have a peacock as your totem animal signifies that you have a compelling vision and know how to discern truth in all matters. You focus on your positive aspects and remain unstoppable in your pursuits.

Being self-confident, you express yourself candidly, thereby reflecting your personality and spirit. You also stand by your beliefs and sincerely follow them.

Tending to be a little flamboyant at times, you enjoy being the center of attention. However, you never allow yourself to get swayed by unrealistic expectations.

You know when is the right time to seize your opportunities.

You are not only beautiful on the outside, but also trustworthy, with a pure heart. 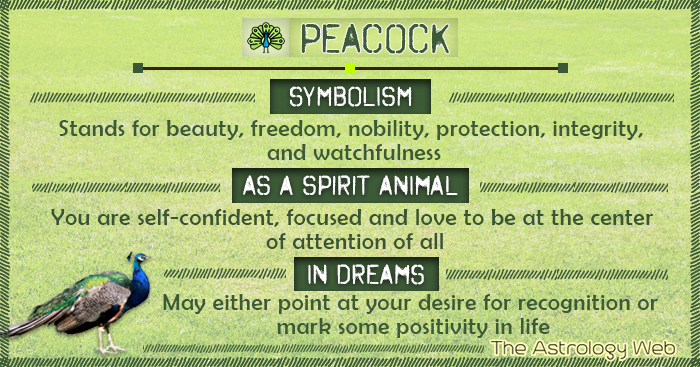 What Does it Mean When You See a Peacock

Seeing a peacock is a reminder for you to acknowledge your dreams, aspirations, and that you may achieve perfect beauty only if you manifest your true self to others.

What Does it Mean When You Dream About Peacocks

Dreams of peacocks may either reflect your desire for self-recognition or stand for some positivity in your life.

To see a peacock spreading its tail feathers means that you might be invited to a new project. A dream of peacock feathers also implies that you usually strive to achieve what you wish for in actual life.

Seeing a peacock making a loud noise in your dream, points to your efforts to impress those who are important to you.

If you see a peacock attacking or fighting in your dream, then it is an indication of your growing arrogance and the possibility that you might now have to face jealousy and competitive attitude from others. A flying peacock in your dream also signals that you let yourself get carried away by success.

A dancing peacock implies that others are keeping an eye on the progress of your projects.

If you see a talking peacock, it suggests that there is someone very powerful in your life.

A baby peacock in your dream points at your new growth – the fact that you are imbibing new skills to boost your career.

Dreams with dead peacocks signify that you would feel hurt due to being misunderstood.

According to Islamic dream analysis, seeing a female peacock indicates that you would gain sudden wealth, or get married, and have children.

If you see yourself holding the plumes of a peacock, it implies that you would gain something with the help of a woman.

A white peacock in your dream suggests that you need to check your pride and arrogance while appearing before others.

Pink peacocks point at your confidence that allows you to accomplish everything.

Black peacocks in your dream imply that someone, out of jealousy, is spreading rumors about you.

Purple peacocks stand for royalty and indicate that you would achieve wealth in future.

Spiritual and Symbolic Meaning of Peacock in Different Cultures and Religions

The Greek goddess of women and marriage, Hera, is believed to possess a peacock as her loyal companion, who showers her with the boon of immortality. According to popular myth, after the death of a hundred-eyed monster, Argos, Hera transferred its many eyes to the tail of her devoted servant as an act of gratitude. Accordingly, a peacock is identified with the goddess, and its round tail is believed to symbolize heaven with its “eyes” like the stars.

A popular legend states that when the monster Argos declared himself as king of Egypt after kidnapping Queen Isis, Osiris, the original king, turned “Argus” into a peacock as a curse and put all its eyes on its tail.

In Indian Culture and Hinduism

A peacock, apart from symbolizing India’s national bird, also holds several mythical roles. It is the bird of the god of love and tenderness, Krishna, who wears its feather in his hair. Thus, peacock feathers are often kept in the household, for they promise good luck and prosperity. It is also associated with Goddess Lakshmi, who represents patience, kindness, and benevolence in Hinduism. Further, the Tamil God Murugan is believed to ride a blue peacock.

Here, a peacock is a symbol of wholeness, dignity, and beauty.

Besides representing an “all-seeing” church in Christianity, Biblically, a peacock is also looked upon by the Catholics as symbolizing renewal, resurrection, and immortality, for according to an ancient legend, a peacock’s flesh does not decay even after death. For the same reason, it is seen as symbolizing Christ and eternal life.

A peacock’s blood is believed to drive off evil spirits since according to some legends, it is thought to have created its plumage after swallowing a snake’s venom. A peacock’s feathers, on the other hand, is seen as evil since, the “eyes” present on the tail are assumed to be windows through which, the mythical god Lilith, responsible for bringing bad luck, peeps and kills infants.

A peacock, symbolizing rank, divinity, beauty and power, is seen as representing the Ming Dynasty by the Chinese.

The Japanese link a peacock to the deity, Kuan Yin, who is supposed to have created the beautiful color of a peacock’s tail feathers. They see it as embodying Kuan Yin’s compassion.

A peacock’s habit of displaying its feathers enables it to earn the tag of being open, while its habit of eating poisonous plants renders it to have the ability to survive amidst suffering.

Apart from these, according to Alchemical traditions, a peacock is seen as an earthly revelation of the “Phoenix,” with its feathers serving as talismans to guard humans against disasters and accidents.