What Does a Possum Symbolize

The possum (or opossum) is associated with the qualities of protection, brooding, mothering, wilderness, justification, unpredictability, and adaptability.

Having a Possum as your Spirit Animal (Totem Animal)

If the possum is your spirit animal, then you know how to lay low and camouflage yourself with the ‘colors’ of your surroundings.

You are patient and know how to wait calmly before every situation around you develops and uncovers itself to help your dream come true.

You are brave enough to take chances with adventurous experiences in life.

You are a sensible person, in both mundane and spiritual ways.

This totem gives you the message – every cloud has a silver lining. Bad days are not eternal, and there is the brighter side of life. 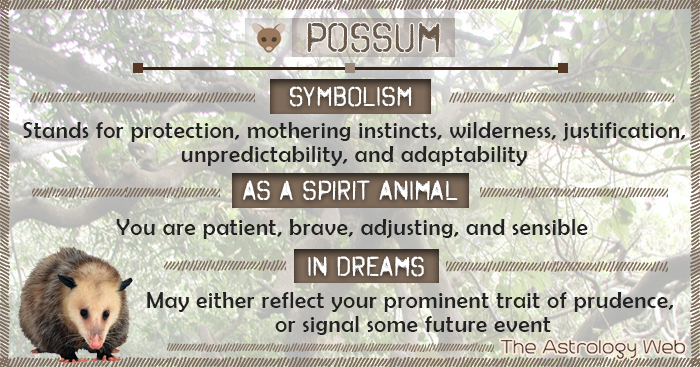 What does it mean when you Dream about Possums

Seeing a dead possum in a dream is lucky. Remember, an apparently ‘dead’ possum is not necessarily lifeless since it intelligently uses the trick of playing dead as a defense mechanism. So, this dream is actually the symbol of watchfulness, prudence, loyalty, vigilance, and self-defense.

Dreaming of a ringtail possum gives you the message that, you are a good problem solver, and with your tactfulness, the lousy time going on in your life is about to come to an end.

If the opossum in your dream seems to be white or albino, it means, you do not need to fear anything anymore, since all dangers are gone, and now it’s peace everywhere around you.

Seeing a possum attacking you in your dream means that, there is someone at your workplace who is secretly envious of you and is waiting for a chance to cause you some harm.

If you see a baby possum, it means that, just like these little ones are carried by their mother, protected in the specialized sack, you too identify yourself with these baby creatures and are depending upon someone influential who holds a powerful position in your life.

If a possum is digging a hole, then it is a bad omen symbolizing that someone very close to you might fall ill or even die.

Spiritual and Symbolic Meaning of Possum in Different Cultures and Religions

Interestingly, during the war, the Native American warriors learned and utilized the ‘play-dead’ trick from the opossum for many centuries. In the battlefield, they would often pretend to be dead especially when the enemies had outnumbered them, or have suddenly drawn too close. Confused, the enemies would retreat, while the Native American soldiers would then leap up with loud calls and attack them in turn.

Pregnant Mexican women would often wear a possum’s tail with the belief that it would help them in the process of childbirth, and also protect the baby before and after its birth.

According to the modern Australian Astrology, the ruling creature of the month of January is the Possum. People born in the possum’s month are said to have a keen instinct with a strong determination. They are level-headed, patient, and take time in planning. Hence, their plans work efficiently in a large scale arena, especially in business, and make them the perfect strategists and leaders. These people always keep options open to themselves, and use them one by one, in case the other one fails. For the same reason, they also make good partners in relationships.