What Does a Raccoon Symbolize

The mischievous yet resourceful raccoon with its distinctive appearance stands proud as a symbol of secrecy, disguise, generosity, playfulness, illusion, courage, intelligence, adaptability, and inquisitiveness.

Symbolism of an Albino Raccoon

It is believed that the appearance of a white animal is linked to world events that call for global peace and unity. It also suggests that it is time to get back to your roots and become one with Earth.

Symbolism of the Raccoon Tail

A raccoon’s ringed-tail, along with its striped mask, is regarded as a symbol of thievery. On the other hand, it could point towards the circle of life itself. It may symbolize the tail-end of a difficult project or situation or simply a certain aspect of your past that is still not completely resolved.

Having a Raccoon as Your Spirit Animal (Totem Animal)

The raccoon totem endows you with an insatiable thirst for knowledge which makes you adventurous and to love exploring new things.

You often stand out as the go-to person in any emergency since this power animal makes you extremely bright and calm under pressure.

The raccoon totem gives you an enigmatic, yet shy personality, but once you start trusting those around you, you can be quite an entertaining company to have.

Stealth is one of your innate traits which makes you tend to achieve what you want, even through unjust means.

Since the raccoon is highly active at night, you are quite productive during the night time yourself and have a tendency to be nocturnal.

The raccoon spirit guide makes you highly courageous and independent enough to fight your battles alone.

Just like the ‘masked’ animal itself, you too tend to be secretive, making you put on a different identity for others while hiding your true self. On the other hand, this feature makes you versatile enough to adapt to all your roles in life effortlessly.

You have an incredibly active and reliable sense of touch, and the raccoon medicine makes you use the same to the fullest. 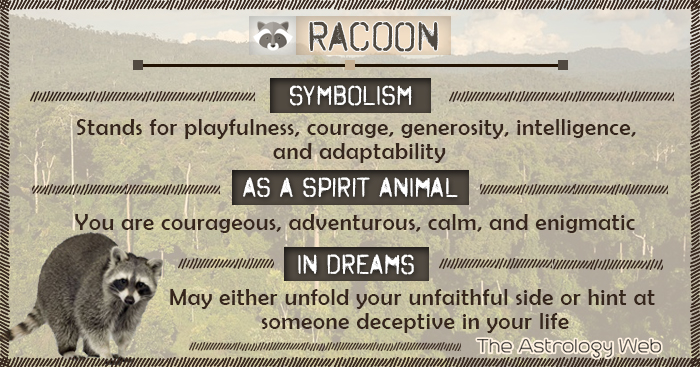 Spiritual Meaning of Seeing a Raccoon

Seeing a raccoon could be a reminder never to let go of your curious nature and always be on the lookout for new experiences.

It is perhaps an indication that you need to stop holding on to a specific issue or person and move on. Contrarily, it may be a suggestion that you should welcome the gifts of the universe with open arms.

It can be a reminder that you need to work harder to arrive at a solution for the difficulty you are facing.

It could also mean that you are about to come across one or two rabbits soon.

A dead raccoon is a bad omen since it foretells that you are about to receive some bad news – it could be regarding a family member in trouble or a break-up. It could also mean that are going to discover some harsh truths regarding how you have hurt others, or about some illness.

What Does It Mean When You Dream About Raccoons

Dreams about raccoons may symbolize deception and theft; that you are duplicitous or secretive and that you should be honest with those around you. It could also mean that you are being untruthful with yourself. Alternatively, this may be a message that someone is about to dupe you or that you have fake friends.

It may imply that you are about to receive a hidden opportunity or a chance to discover something new about yourself, or could simply be the acknowledgment of your flexibility and inquisitiveness.

Seeing a raccoon in the wild or seeing yourself chasing a raccoon and catching it signifies that your talent and efforts are about to yield positive results.

Dreaming about yourself being a raccoon, it could mean that you should protect yourself, make the best of the situation you are in for your benefit.

If you see yourself speaking to a raccoon, it implies that you are going to face adversities and that there are going to be some changes in your life.

Seeing a raccoon’s fur in any form means that you will take up a new hobby that will be beneficial to you financially and will bring you fame. It could even mean that you are about to receive a valuable present.

A raccoon in your house, rifling through your trash may be a hint that you should take a closer look to find out whether you are taking someone or something for granted. It could also mean that you need to be more focused on your goals. If the garbage is strewn all over and you feel rather angry, it could insinuate that your personal problems are out in the open. The people around you are trying to help you out, but in the process, you are exploiting their altruism since you are not taking responsibility for anything and dumping your problems on others.

A baby raccoon in a dream symbolizes abundance, consideration, and prejudice in certain aspects of your life.

If you see yourself feeding a raccoon, it indicates that you are about to meet a loyal and generous friend. If you are an unmarried woman, this symbolizes the advent of your future husband.

Dreaming of a raccoon attacking and biting you may be associated with opulence, unity, and sentiment.

An animated raccoon in your dream denotes that you are discontent with your monotonous life and are craving excitement.

A dream about you killing a raccoon suggests that you are guilty about the fraudulent way in which you have achieved success in some aspect of your life.

A dead raccoon is an indication that a long-standing problem is finally going to get resolved, albeit in a chaotic fashion.

Spiritual Meaning and Symbolism of Raccoon in Native America

In Native American folklore, the symbolism of raccoon varies from one tribe to another. In Abenaki mythology, Azeban is a dim-witted yet benign raccoon, always on the hunt for food. In many other ethnic groups, the raccoon symbol represents curiosity, resourcefulness, and resilience.

In Mississippian culture, the raccoon depicts the religious beliefs and war culture of the tribes. They believed that the mighty raccoon spirits influenced the people on earth or the ‘Middle World’- the world between the dark world and the good world.

An albino raccoon is considered auspicious by practically all Native American tribes due to its spiritual connections and links with raccoon medicine. They are good omens that stand for fertility, adequate harvest, and rain. The very quality of being white was associated not just with purity but also ancient wisdom and extensive spiritual knowledge. Their primary principle was that the hunting or killing of an albino would put a curse on the hunter.