What Does a Rat Symbolize

Having a Rat as Your Spirit Animal (Totem Animal)

To have a rat as our spirit animal means that you are brave, social, honest, adventurous, mentally dexterous, and also reckless.

With an innate surviving spirit, you can adapt to any adverse situation and brilliantly use your skills of resourcefulness to derive the best of what you have.

You maintain an easy-going nature when with others and while cooperating, do not deter from candidly voicing your opinions. But, regarding business or monetary matters, you are shrewd and depend on your insight to triumphantly overcome all challenges.

However, your tendency to drive headlong for anything that captures your heart and not recognizing the fact that it also might be liked by others reflects your selfish nature. It implies that you may even hurt others to obtain your goals. 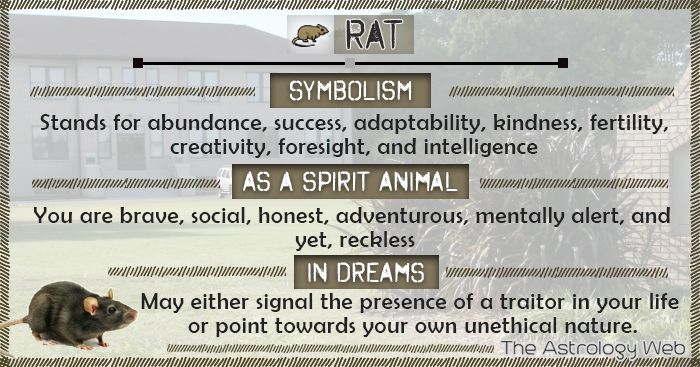 What Does it Mean When You Dream About Rats

Dreams about rats may have both positive and negative meanings. They may point towards your unethical nature or signal the presence of a traitor in your life. They may also indicate sickness.

A dream of a rat biting something hints at the unpleasant things in your life that are bothering you. Whereas, a rat biting your feet stands for the tremendous competition you are facing in real life.

A dead rat mirrors your fears about an issue.

Killing a rat looks forward to your victory over enemies. However, seeing yourself being prevented from killing it in the kitchen implies the restriction imposed on you in putting an end to an issue.

A rat chasing you in a dream suggests your downfall by disputes, whereas catching or holding a rat upholds your awareness of what all are negatively influencing your life.

To dream of rats in the attic points at the arrival of a decision after much deliberation.

A rat running away stands for unseen negative forces.

A giant or a large rat promises a party with friends.

A rat giving birth signals your enemy, who is trying to steal something.

Seeing rats eating in your dream suggests your utilization of other’s resources.

To dream of eating a rat yourself reflects your backbiting nature.

A rat crawling on you foretells either grave sickness or spending of money.

A rat jumping up and down implies comfort, intimacy, and regard.

A snake eating a rat refers to gaining money.

Seeing flying rats in your dream suggests disaster and loss.

If a young woman dreams of cooking a rat, it stands for the new duties she would assume shortly.

A black rat implies that you are being deceived by others.

A grey rat indicates the existence of someone evil in your life.

Symbolic Meaning of Rats in House

Seeing rats in your house may either predict the advent of problems in your life or mirror your attraction towards something positive.

Symbolic Meaning of Rats According to Diverse Cultures and Religions

Symbolizing security and survival in Shamanic traditions, a rat seems to give protection to one’s health. This is also because it is believed to have a high immunity to environmental toxins and diseases. In Celtic cultures, however, a rat is largely seen in a negative light for bringing about misfortune.

According to Indian beliefs, Lord Ganesha, the embodiment of auspiciousness, rides a rat to help people get rid of all problems troubling him. In other words, since a rat symbolizes troubles, Lord Ganesha aims to keep it under his control by sitting on it, thereby preventing it from disturbing humans.

Symbolizing fertility and wealth, a rat stands for good luck and is also a companion of the god of wealth, Daikoku.

Amidst the several references to rats and mice in the Bible, the most significant ones are those that appear in Leviticus 11: 29, forbidding the eating of rats. Secondly, rats are also mentioned in the description of how the Philistines send guilt offerings of golden rats after they were infected with tumors as punishments from God. The last verse is Isaiah 66:17 narrating a particular curse for those who eat rats in pagan temples.