What does a Seal Symbolize

A seal is a symbol of stability, happiness, playfulness, peace, strength, imagination, intuition, loyalty, vivaciousness, intellect, organization, excitement, success, security, and balance. As a totem animal, it plays the role of a guide, advising you to nurture your inner abilities and senses for staying contented.

Having a Seal as Your Spirit Animal (Totem Animal)

To have a seal as a spiritual guide means that you are a good decision-maker and rely less on others. This ability makes you independent and self-sufficient.

You can control your emotions and desires if the situation demands, taking less time to make adjustments.

You prefer activities that arouse your creativity for doing something productive. Responding to any problem with a unique solution is a piece of cake for you.

Understanding and helpful, you are often approached by close friends for useful advice. Your unbiased nature makes you even more lovable. 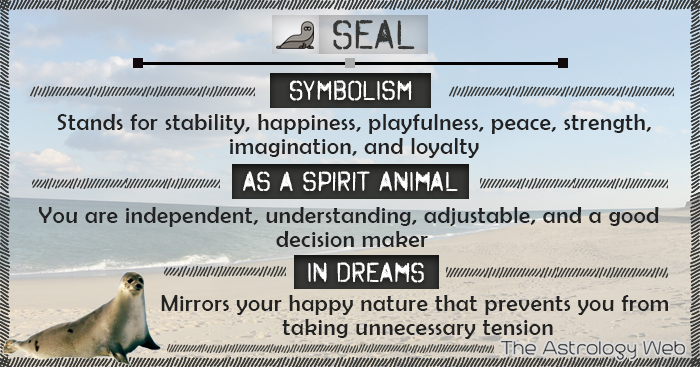 What Does it Mean When You Dream About Seals

Seeing a seal in a dream refers to your jovial nature that does not let you take unnecessary tensions.

To have a dream about a seal attacking you means that you might not gain much success in your current venture.

Catching a seal could imply that you might get some financial help from close friends.

A seal biting you in a dream suggests that you need to uncover your hidden secrets.

If a seal is chasing you in a dream, it indicates that you need to follow your dreams.

A talking sea symbolizes that you have a great relationship with your partner.

The appearance of a dead seal in your dream signifies that you are worried about opportunities that have come late.

Petting a seal may mean that you have decided not to disturb your peace mind by getting into unwanted complications.

Dreaming about a baby seal indicates that you are confident about taking responsibilities.

A black seal showing up in a dream means that you are irritated with some petty issues in your life.

A white seal symbolizes joyful celebrations at your house that would soon take place.

A blue seal implies that you are surrounded by disloyal friends who will show their true self soon.

A black seal in a dream makes you realize that your near and dear ones have high expectations from you.

Seeing a grey seal in a dream reminds you to maintain your integrity and dignity.

Symbolic Significance of Various Types of Seals in a Dream

To see an elephant seal in your dream represents your good sense of humor.

A dream with a leopard seal could mean that you are not happy about your personal or professional choices.

To dream of a harbor seal is a message for you to think logically instead of making hasty decisions.

A monk seal is regarded as a symbol of enjoyment, courage, and adventure.

During the biblical times, a seal was considered to be a favorable omen signifying integrity and ownership.

According to the tribes of the Northwest coast, seals are the embodiment of wealth and abundance. The Nootka and Makah tribes associated seals with the safety of their sailors on the ocean.