What Does a Shark Symbolize

Different Types of Sharks and Their Meaning

To have a shark as your spirit animal means that you are bold, aggressive, sharp, and intimidating.

Being aware of your requirements in life, you utilize your knowledge to get what you want. Actually, you seek out your challenges and are often steadfast as well as fearless to achieve your goals.

Just as a shark’s unsinkable nature makes it appear cold and detatched, you too are distant, controlled, and mysterious in reality. Proficient in carrying yourself well, you are naturally liked by others, but you hardly reveal your real motives. 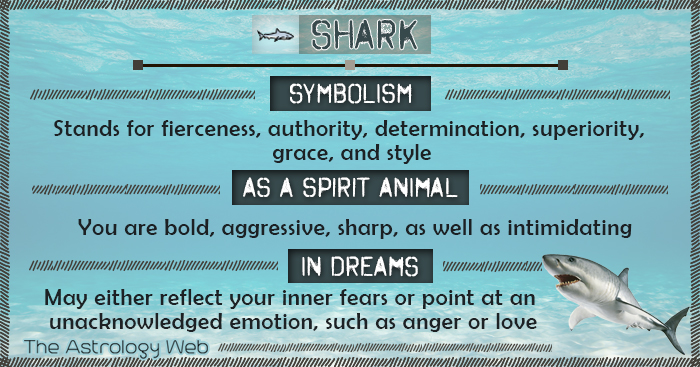 Shark dreams may either reflect your inner fears or point at any of your unacknowledged emotions such as depression, jealousy, and anger.

A shark’s attack implies that you are being assaulted by someone in real life.

A dream about yourself swimming away from sharks signals the existence of some danger in your life.

A dead shark in your dream promises the termination of a difficult period. Killing or catching a shark also has the same meaning.

Fighting a shark embodies your conflict with someone.

A dream about being eaten by a shark indicates either your growing awareness or signals the possibility of some accident.

A shark’s bite reflects your power of motivation. Now, if the shark bites your hands or fingers, then it’s an indication of being assaulted by hostile co-workers.

A shark chasing or hunting you embodies your desperate efforts to escape the troubling memories of your past.

Riding a shark in your dream looks forward to a situation that’s helping you.

A flying shark offers guidance in your life ahead.

A baby shark points at your immature approach towards work.

A giant white shark in your dream suggests that you may be attacked by someone.

A Hammerhead shark mirrors your apprehensions about someone’s reactions.

Spiritual Meaning of Sharks in Other Cultures

Here, a particular species of sharks are taken as “anumakua” or family guardian, and it is held that they represent animal reincarnations, sent to earth to protect the tribe. Consequently, they are given tremendous respect.