What Does a Sheep Symbolize

The sheep is the symbol of the circle of life along with peace, purity, compassion, creativity, infinity, courage, sure-footedness, progress, and big dreams.

As your Spirit Animal (Totem Animal)

If you are a sheep person, then you are creative, humble, and compassionate. You stay level-headed and cool even when you discover yourself trapped by other people’s egotism.

Just like a sheep, you also have a timid (but not cowardly) nature, maintaining distance from unknown people and different situations.

Quite like a creative person, you are a patron of everything beautiful – flowers to a foggy morning, poetry to painting – and never fail to appreciate them.

Just as the sheep loves its own flock, you are fond of your family, friends, and those close to you, thus, living in perfect harmony. 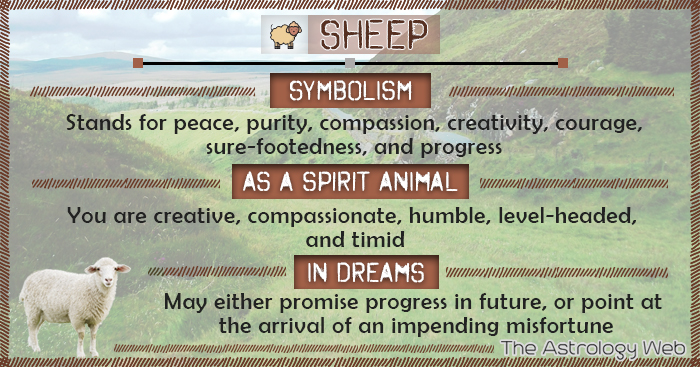 Dreaming About a Sheep

If you dream of a sheep, either a ram or ewe, grazing, it means progress is on the way. Bad days are gone, and it is time for you to sit and relax.

If you see that you are eating sheep meat, it symbolizes an impending danger to your family. It usually signifies conflict, but not death.

If you dream that you are killing a sheep, it’s an evil omen saying that something bad might happen to you.

Dreaming of a black sheep, it means that you might undergo a period of difficulty.

A white sheep in your dream signifies that good days for your family are heading.

If you dream that you have lost your sheep and are searching for it, it means that you will meet with prosperity due to all your combined efforts and actions.

A flock of bleating sheep signifies that there are a few characters in your life (outside your family) that are talking behind your back or criticizing and gossiping about you. So it is time for you to refrain from sharing too much of personal details with others.

If you dream of a sheep that is feeding, it means that the present moment is a stable time in your life, and you will live your life smoothly, with all that you need, in the days to come.

If you see you are chased by a mountain or wild sheep, it means that you are going through some hard time in your waking life from which you want to escape.

A dead sheep or a sheep’s skull is again a bad omen that signifies that you might hear a bad news very soon.

Dreaming of a baby sheep or lamb actually speaks about your spiritual side and signifies your development within.

Sheep have been associated with Hinduism since the Vedic Era. Offering sheep meat on the fire altar was also widely practiced during the Vedic and other periods. Even at present, sheep sacrifice is carried out in some places that follow Tantrism.

A pure white ram is the vahana (carrier or vehicle) of the Hindu fire god Agni (symbolizing fire sacrifice), while a large ram with two strong horns is the vehicle-animal of the planetary deity Mangala (Mars), the lord of war.

Sheep, especially the lamb, play a very significant role in Christianity. Mentions have been made in the Bible’s New Testament about how the newborn Christ was surrounded by sheep and lambs. Sheep have frequently been portrayed in numerous nativity scene paintings for many centuries.

The walls of many churches have often been decorated with the images of Jesus alongside lambs and sheep since the lamb is the direct symbol of crucified Christ. Jesus as the Lamb of God is also a common Christian philosophy that represents self-sacrifice. Hence, mutton (lamb meat) is a common preparation during Christmas.

In Celtic mythology, sheep are associated with the goddess of healing, motherhood, childbirth, and fire, Brigit.

One of the twelve animals representing the set of twelve years coming in a cycle is the sheep. The year ruled by sheep is called a sheep year.

In the western astrology systems, the zodiac sign Aries is represented as a bighorn sheep. Additionally, the Gemini people are also associated with the traits of sheep/goats.

Reference to sheep has been made multiple times in literature – like in fiction, including George Orwell’s Animal Farm, Antoine de Saint-Exupéry’s The Little Prince, Paulo Coelho’s The Alchemist, Khaled Hosseini’s The Kite Runner; in poetry, like Marjane Satrapi’s Persepolis, and the timeless imagery of sheep by William Blake in his poem The Lamb.