What Does a Snow Leopard Symbolize

The snow leopard is a symbol of the power of psyche, silence, mystery, perception, intuition, determination, experience, self-reliance, and balance.

As your Spirit Animal (Totem Animal)

Since these creatures dwell in the high altitudes of the tranquil mountains of the Himalaya, they are almost one with the Great Spirit and the Mother Earth. If the snow leopard is your power animal, you can easily communicate with the wisdom dormant within you, and hence, you should try to open up yourself to your intuitive abilities.

Just like this animal has the ability to move almost invisibly towards its prey, you too maintain a very humble profile while pursuing your goals so that you do not catch the attention of your competitors.

Snow leopard attacks by the neck of its prey, i.e. from the back. Similarly, it is not easy for you to meet people face to face, and at the same time, you also want to be sure that you are safe from behind. Both these situations mean that you maintain the balance between all things in general. So, if you are in need of ‘defeating’ someone, you also make sure that you are on the safe side.

The big cats have strong bodies and need to release their energy and wrath by means of swift aggression. So you are a human with an angry temperament and need to release that vibration from within. Otherwise, this energy might end up settling into your body, causing situations of mental stress like depression, or physical pains as in arthritis. 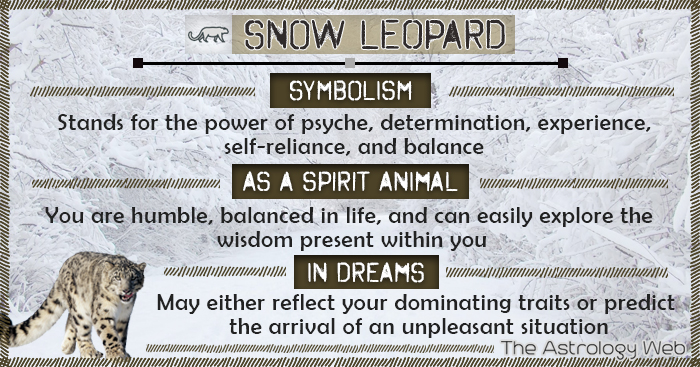 A white snow leopard in a dream symbolizes that you are what you already are, and no one can change your inner identity.

Seeing this big cat in the wild symbolizes that, there is an enemy who is about to meet you face to face only to cause your envy and demand your long admiration. So, beware before you get ditched.

A captive or caged one suggests that your present state of going through hindrances and obstacles is about to come to an end very soon.

If you dream of killing this large feline, then it means that you will soon meet with success in your present ventures.

If you are attacked or chased by a snow leopard then it signifies that you are too much confident about your future success and you are underestimating the challenges you might want to face in order to attain it.

In Nepal, it is said that the Buddhist monks, or the ‘lamas’, often take the form of snow leopards and visit the mystique land of Tibet to search for rare medicinal herbs from the mountains.

There have been other folklores that have glorified the mountain leopards as the protector of crops from vermin, rodents, and other larger animals and pests, and have addressed them as the live “fence” to the crop fields for the crops. The locals believe that without these guards, it would not have been possible to protect the vegetation.

In different mainstream Asian cultures too, the snow leopard has high spiritual significance. Many of their legends speak of the animal with deep reverence. This large feline has various colors, among which, the color brown is the symbol for the earth, the black snow leopard symbolizes the spirit of the night, magic and mystery, while white snow leopard signifies the day, and has a connection to the ‘Great Spirit’.

To these indigenous people from the northern parts of Pakistan, and parts of China, Tajikistan, and Afghanistan, the snow leopard is known as the ‘pes’, and they hold the animal in high esteem, worshipping it ritually.

The Wakhi people also identify this animal to a fairly-like supernatural female being called the ‘mergichan’ (who are also known as ‘pari’ in Northern India, Pakistan, Afghanistan and the entire central Asia).

In modern times, people often opt for snow leopard tattoos since they feel that it is an ideal way to show their intention to return and connect back to nature, beyond the present-day natural crises. To them, this animal is the symbol of resilience, agility, strength, and perseverance.