What Does a Sparrow Symbolize

The chirpy sparrow stands for protection, productivity, joy, simplicity, unity, friendliness, innovation, involvement, vigilance, motherhood, persistence, empowerment, and integrity. As a spirit animal, it motivates you to recognize your self-worth and maintain your dignity, reminding you that something small like a sparrow can triumph in the big world.

To have a sparrow as your totem guide means that you are fearless and face every challenge with confidence.

As a sparrow constantly works to collect and store food, you too believe in putting immense efforts to live a happy and contented life rather than sitting idle.

You derive strength from communal involvement, stressing the fact that through cooperation and sharing of responsibilities, one can fight for a common cause. For this reason, you are considered suitable for taking up the role of a team leader.

Since you dislike flaunting and find satisfaction and comfort in small things in life, earning a huge amount of money to become rich is not your priority.

You do not stress yourself necessarily, even when handling multiple responsibilities. 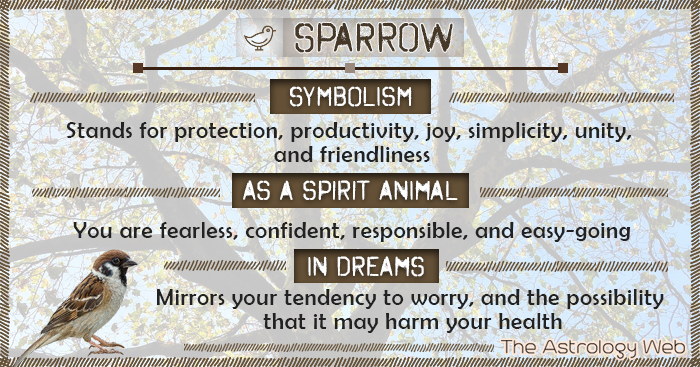 Dreaming About a Sparrow

The appearance of sparrows in dreams signifies that you are taking on too much of a personal workload that could be damaging to your health. Try to take some time off to relax and unwind.

Seeing a flock of chirping sparrows in a dream may symbolize restlessness, innocence, and pride.

Coming across a dead sparrow in a dream suggests you do not voice your opinions until the situation demands, otherwise the consequences might turn out to be bad.

Eating a sparrow signals the end of a relationship with someone close to you.

A female sparrow may remind you of some pending social commitments in your family that have to be completed.

If a chipping sparrow appears in your dream, it symbolizes greater opportunities for profitable gains.

A house sparrow in a dream encourages you to have faith in yourself.

To dream of a field sparrow means that you are hiding a secret from your close ones.

Feathers of a sparrow stand for majesty, freedom, and beauty.

A red sparrow in a dream represents passion and impulsiveness.

A white sparrow indicates that you will meet a successful personality soon.

A dream about a blue sparrow might mean that you will find true love.

A green sparrow predicts the rewards you will get for your hard work.

Dreaming of a yellow sparrow may bring sudden wealth and happiness to your life.

In Christianity and Bible

According to some biblical quotes, the fall of a sparrow stands for the importance of souls, irrespective of their size, having a spiritual relationship with the indescribable universe.

Among some Native Indian tribes, the sparrow was believed to be a friend of the peasants and common people. Several folktales have described it to be a helping spirit and an elder who could move between earth and heaven.

A sparrow is a symbol of happiness and spring for the Chinese. In fact, if the bird builds a nest in someone’s house, it may bring good luck to that family.

Tongue-cut sparrow is a popular Japanese fairytale that tells the story of an old man, his greedy wife, and an injured sparrow, saved by the former.

A sparrow is a Celtic symbol of ancestral knowledge, remembrance, and intelligence. A sparrow flying into a house is a good omen.

Aphrodite, the Greek goddess of love, held the sparrow as sacred, symbolizing true love and spiritualism.