What Does a Spider Symbolize

Having a Spider as Your Spirit Animal (Totem Power Animal)

To have a spider as your totem guide animal means that you plan and take a lot of time before taking up any work. Also, you make constructive decisions after deep thinking rather than being too impulsive.

As most spiders have multiple eyes, you too remain cautious about your surroundings. For this reason, you are less likely to get hoodwinked by anyone.

Although you love staying in high spirits, at times, you may become self-absorbed and limit your communication.

Neat and tidy, you have excellent organizational skills owing to your endurance and perseverance.

You behave gently with everyone and lend a helping hand when the need arises. 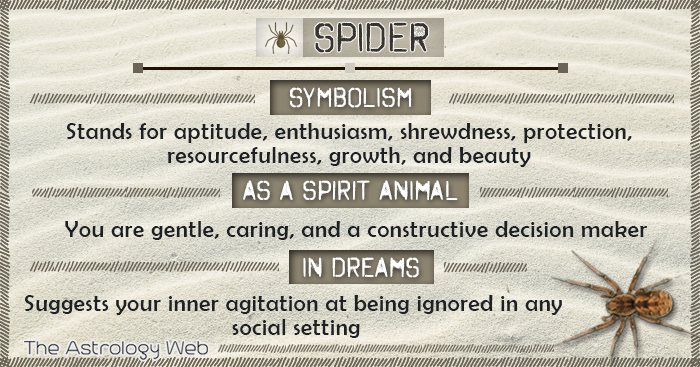 What Does it Mean When You Dream about Spiders

Having recurring dreams or visions about lots of spiders could signify that you are feeling like an outsider within your social circle and ignored by everyone. According to some Islamic interpretations, dreams with spiders refer to malicious and sinful women.

Dreaming of spiders everywhere in the house might mean that you are sensing danger in your surroundings.

Getting attacked by spiders could appear as a nightmare, but it symbolizes that you are offended by someone’s misbehavior.

A spider biting/stinging your finger, arm, leg, foot, shoulder or neck with its fangs may represent a conflict between you and a female figure in your family, probably your mother.

A dream where you discover spiders in a box or jar might be a sign of cheerfulness, agreement, and satisfaction.

To dream of a spider coming down or descending from ceiling indicates that you are trying to escape from a relationship. The same meaning holds true for a spider falling from a ceiling.

A spider hiding from you reflects your wild fantasies that are unknown to others.

To witness a spider climbing a wall promises success and fame.

A flying spider tells you to stay away from toxic people in your family.

A poisonous/venomous spider showing up in your dream stands for treachery and dishonesty.

The appearance of a jumping spider suggests you take care of your health.

A dream about growing or glowing spider makes you realize your achievements that seemed impossible before.

Dreaming of a robot spider symbolizes a routine, mechanical way of carrying your life with no energy.

A spider hanging from a web/net might bring favorable news.

When a spider molts in a dream, it relays a totem message, suggesting you to forget the past and plan for the future.

Killing a spider is a sign of disaster and ill luck.

Eating a spider is a symbol of self-control and discipline. However, spiders coming out of your mouth may drop a hint at your inability to control any situation.

If you are chasing a spider in your dream, it means that you want to maintain a distance from everyone. On the other hand, a spider running after you while you are trying to escape is associated with entrapment and lack of freedom.

Dreaming of dead spiders indicates that you longer care for the minute problems in your life.

A dream where a spider is your pet gives an idea about your courage to face challenges.

Turning into a spider in a dream justifies your intentions to gain something through dishonest means.

Spiders crawling all over your body, including the face, may imply that your current situation in waking life is making you feel threatened.

Spotting spiders on the floor in a dream denotes that you want to stay energetic.

Spiders in your hair or head are evident of the fact that you are extremely conscious about your overall appearance. In contrast, a spider in your ear, nose, or eye stresses upon the need to be more vigilant and obedient.

If you see spiders infesting your bed, including your pillow, it means someone is invading your privacy in the waking state. Discovering them under your bed implies the same.

Finding a spider in your toilet or bathroom speaks about your curiosity.

Seeing spiders under your skin is a signal about spirituality.

Dreams with baby/tiny spiders suggest blossoming of a new relationship.

A giant/big spider points at your influential friends who may come to help when you are in deep waters. However, if a large/huge spider falls on you, it signifies that you will lose those friends.

While a four-legged spider defines your present mental status that might be a bit disturbed, a seven-legged one is a symbol of perfection and completeness.

Spiders with scorpions or snakes in a dream remind you that someone is above your head, providing protection. On the other hand, seeing them with frogs foretells an imminent danger.

During pregnancy, having dreams about spiders gives the impression that you are in an emotional entanglement due to someone’s interference.

Spider webs in a dream suggest that you are either manipulating someone or getting manipulated.

To see spiders laying/hatching eggs in a dream may point to your failure in recognizing your true potential.

The appearance of a spider’s legs indicates that you require support and help.

Coming across a spider’s nest is suggestive of difficulties and hardships you may soon face.

If your dream is about the Spiderman, it advises you to use your inner strength and will force to overcome adversities.

Psychological Interpretation of Dreams with Snakes of Different Types

A redback spider appearing in your dream may mean that your sacrifices are going in vain.

If the dream is about a rainbow spider, it’s a way of telling you to be more adventurous and explore new places.

A tarantula refers to the presence of too many females around you, causing insecurity.

The appearance of a black widow in your dream stands for death.

Dreaming of a huntsman spider could be associated with the supernatural world.

A hobo spider predicts a loss of a valuable item.

A funnel web spider indicates that you will soon be rewarded for your efforts.

Having a dream about a crab spider assures longevity.

A camel spider advises you to lessen your burdens and relax a bit.

A dream where you see a zebra spider depicts monetary gains.

A white (albino) spider is a symbol of purity, clarity, and knowledge.

Seeing a black spider could signify emptiness and mourning.

A green spider promises a new life and hope.

A dream where a red spider is spotted could show that you are alarmed by a particular event.

A yellow spider represents a concern about your future.

A golden spider ensures an abundance of wealth and prosperity.

A grey spider is a mark of estrangement and dissatisfaction.

Symbolic Meaning of Spiders in Several Cultures and Religions

It is believed that the Lord helped his men during wars by building a spider’s web as a spiritual wall of protection when they hid inside caves from their enemies.

According to many Christian beliefs, in dreams, the biblical representation of spiders as evil spirits stand for lies, deceit, and confusion.

Jorōgumo, a mythological female spider figure is depicted as a woman who lures and marries passing samurai to seek revenge. In other stories, she has been shown as a goddess residing near the Jōren Falls who saves people from drowning.

Based on traditional folklore, eating a black spider between two slices of butter bread will give magical powers. Another occult practice is carrying it in silk pouch around the neck to keep any illness at bay.

In their culture, a spider is considered as a totem inventor while its eight legs symbolize the medicine wheel.

According to ancient Egyptian mythology, goddess Neith is closely associated with a spider that plays the role of a spinner and weaver of destiny. In some Western African stories, the spider is a trickster god, Anansi.

The aboriginal tribes of Native America believe that the constellation Ursa Major was born when seven men, transformed into stars, climbed the sky with the help of a spider’s web. They even believe dreams with spiders might be a sign of protection against storms. There are also stories proving the existence of a Spider-Woman in the Southwestern region who is a teacher. The Hopi tribe has often shared the tale of Spider Grandmother who created the world by weaving her webs all over.

A Chinese folk novel, Wu Cheng’en’s Journey to the West, written in the 16th century is a story about a Buddhist monk getting trapped in a spider’s cave and surrounded by beautiful women and children.

According to the Vedic philosophy, the spider is portrayed as hiding the truth with the veils of illusion.