What Does a Tiger Symbolize

Having a Tiger as Your Spirit Animal (Totem Animal)

To have a tiger as your spirit animal means that you are observant, independent, strong-willed and adventurous. Naturally, you do not think twice before plunging headlong to attain your goals. However, your persistent nature is also marked by patient rumination. Hence, before deciding on anything, you take time to minutely weigh the pros and cons of every challenging condition.

Your ability to assist those in need earns you a favorable place in social circles where you either blend in or camouflage. And, if circumstances tend to become stressful, you prefer to retreat to a quiet place to enjoy utter solitude.

Your natural grace and sensuality is a matter of attraction for many, and you exert your sexual preferences vigorously and intensely in relationships. 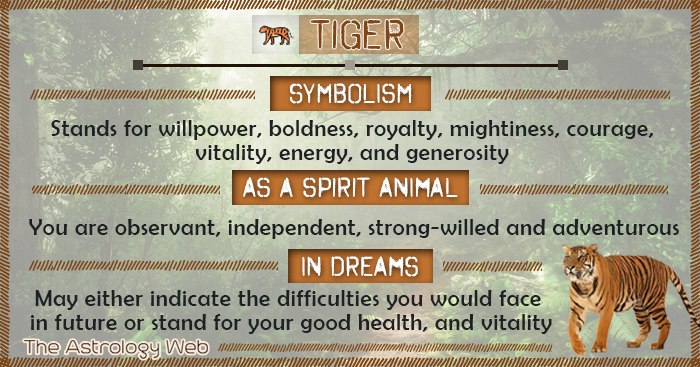 What Does it Mean When You Dream About Tigers

Tigers in dreams indicate the difficulties and obstacles you would face in your walk towards success. A tiger’s dreams also stand for good health, vitality, and leadership.

Dreams about giant tigers attacking or chasing you point at the premonitions you have in your subconsciousness about being assaulted by someone. To dream of a tiger hunting you, on the other hand, promises glory and honor in future life.

Killing a tiger implies the control you have on a certain aspect of yourself that you want to change.

A tiger protecting its cubs symbolize the extreme limits you are ready to go to guard your little ones.

Dreaming of a tiger fighting a lion suggests a conflict between a father and son.

Petting a tiger refers to your hidden desires to do things that are contrary to your nature. Dreams about a pet tiger or a friendly one hugging and licking you can also be a warning to be conscious of hypocrisy among your friends.

A tiger’s bite hints at the damage caused by someone.

A dream of a tiger eating a dog suggests the presence of someone harmful, who would criticize you in various ways. A tiger in your house also bears a similar meaning.

A dead tiger refers to some hidden danger that may affect you anytime.

Seeing a tiger’s eye means you need to be on your guard.

Dream of a tiger eating a snake embodies repose, crush, and benevolence.

Riding a tiger in your dream implies authority and sovereignty.

A tiger’s head points at your capacity to accomplish things beyond your means.

A tiger and a leopard staying together suggest the incoming of some serious illness.

To have tiger dreams during pregnancy look forward to the birth of a baby boy, who would be brave and invincible.

White tiger: Stands for the arrival of someone powerful

Blue tiger: Represents the belief that overpowers other priorities.

What Does it Mean if a Tiger Crosses Your Path

A tiger crossing your path is a reminder that you must utilize your power of persistence to achieve your dreams.

Spiritual and Symbolic Meaning of Tigers in Different Cultures and Religions

A tiger, symbolizing powerful energy is regarded as the king of beasts in China. It is also connected with the Chinese God of Wealth, Tsai Shen Yeh. Among the 12 animals of the Chinese zodiac chart, the tiger occupies the third position and determines the years 1914, 1926, 1938, 1950 and so on. Accordingly, those taking birth in these years are said to be born in the year of the tiger.

Further, in Chinese myth, there are 5 tigers that are believed to balance the cosmic forces. These 5 Asian tigers are:

Yellow Tiger: Symbolizes the sun and is believed to be the supreme ruler of all these tigers

Here, a tiger believed to be residing in a gentle state of being stands for confidence, fulfillment, and the air element.

As a National Symbol of India

A tiger, signifying agility, strength, and power is taken as the national symbol of India. Hailed as the lord of the jungle, it represents the vast wildlife wealth of India. In some Asian tales, however, tigers are depicted as marks on graves, as they are considered to be protectors of the dead.