What Does a Turtle Symbolize

To have a turtle as your totem animal means you have the inner wisdom and patience to understand that all things occur at their perfect time. So you never rush but contemplate before taking each step.

Just as a turtle protects itself against formidable predators, so too, you retreat into your peaceful mind to shield yourself from negative emotions such as jealousy and thoughtlessness.

You take the best care of yourself and appreciate all creations heartily in your long and fruitful life.

Being tuned into the elements of land, animals, people, and plants, you are blessed with Earth’s ancient wisdom.  As such, you stay grounded in all phases of life.

Amidst life’s various obstacles, you remain determined and vigorous and if you feel that you have been wronged, you wholeheartedly strive to put forward your point of view.

You are endowed with enough flexibility to adapt to new surroundings, like a turtle carrying its home on its back. 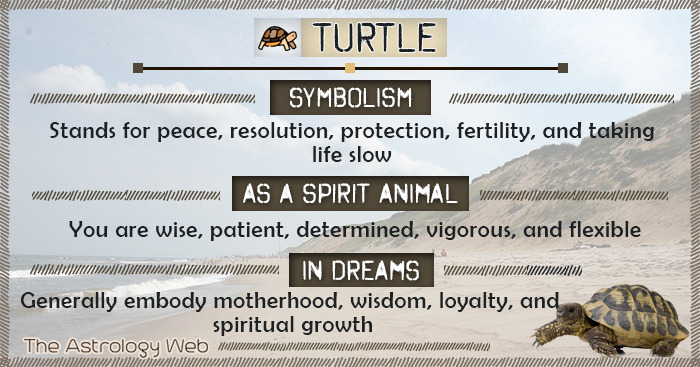 When a Turtle Crosses Your Path

A turtle crossing your path is a reminder that you need to have trust in your way of working things out. Others may hasten, but you need not be tempted by them; just carefully observe all details and then proceed.

In general, turtles in your dream symbolize motherhood, wisdom, loyalty, and spiritual development. They may also signify your secret wishes of becoming pregnant.

In the Bible and Christianity, dreams about turtles usually symbolize amity and accord.

Dreaming of a snapping turtle may point at your frustration or that you have unfulfilled wishes.

Seeing yourself being chased or attacked by a turtle implies that you are avoiding confronting some issues in your waking life.

Eating a turtle in a dream is an indication of your pleasurable life while seeing yourself eating turtle soup refers to the pleasure you would get in some risky venture. In Islam though, it means you would soon acquire Islamic knowledge.

To see that you are being bitten by a turtle is a warning that someone who has been loyal for long, is going to be unfaithful.

Seeing yourself riding a turtle means that something is making you anxious lately.

Dreams with giant turtles signify that you would overcome all challenges.

If you see a hurt turtle in your dream, then it is a reflection of your hidden desire to gain respect from others.

A dead turtle in your dream is a reminder for you to be open to others.

Dreaming of Turtles in Motion

Seeing a turtle walking or moving in your dream, or accidentally killing one may be a reminder for you to slow your pace in life so as to achieve your goals.

Turtles swimming slowly in water signify that you are blessed with a long life.

To see a fast-moving turtle while dreaming is a suggestion to alter your course of thinking or action for a better outcome.

Seeing a flying turtle in your dream means that you need to try new avenues and options by discarding your inhibitions.

To dream of a blue turtle is a good sign for it symbolizes honesty and wisdom that you perceive in someone.

Seeing a black turtle in your dream refers to the obstacles that you are facing.

Dreaming about a golden turtle refers to periods of prosperity that you would be facing in life.

Dreams about green turtles refer to your good health and vitality.

Turtle Shell in a Dream

Dreaming of turtle shells generally signifies protection of your inner thoughts from the outer world.

Seeing an empty turtle shell signifies that you are vulnerable to having exposed your innermost feelings to others.

A broken turtle shell is an indication of a rift between you and others.

The divine turtle, representing the most primitive symbol of Mother Earth, demonstrates her stoic capacity by carrying man’s heavy burden on her back. Apart from being held sacred for saving humans from the Great Flood, it is also linked with fertility for producing a large number of offspring.

The ancient Egyptians, believing that turtles possessed demonic powers, feared them and so to protect themselves, carried turtle-shaped amulets.

A turtle is respected by the Africans for being prudent, clever, and for having endurance. Inhabiting both land and water, it is also believed to have a close bonding with the Spirits of Water and the Rain God.

According to Hawaiian legends, the sea turtle called, “Honu”, guided the first Polynesians when they came to these islands. Other myths recall the protective nature of the sea turtle, “Kailua” that often turned into a woman to safeguard children playing on the beach. Furthermore, a sea turtle’s ability to return home, after swimming many miles in the sea, is seen by them as representing good luck and faithfulness.

A particular turtle represented the war god “Tu” in this tribal culture and as such, tattoos sporting turtles were often worn by them before going to battles.

According to their ancient history, turtles are seen as great survivors for their ability to sense vibrations through the water.

The Mayans associate a turtle with water and earth. Their Atlas-like deity, Pauahtun, is believed to carry the world on his shoulder and is at times depicted as sporting a turtle shell on his head. In their Creation Myth, the Maize God is at times shown alighting from the shell of a giant cosmic turtle.

In Hindu mythology, the turtle, known as “Akupara” or “Chukwa” is believed to carry on its shell, four elephants that have the world on their backs. Further, a popular myth recalls how Lord Vishnu, God of protection and good deed, incarnated as the turtle “Kurma”, to assist the Devas in acquiring the nectar of eternity.

In Japanese and Chinese Cultures

The Asian countries generally regard a turtle as representing universal order and contend that the world has been formed from its body.

The turtle, serving as an emblem of the seafaring god of the Japanese, “Kumpira,” stands for support, longevity, and good luck. The general belief is that it symbolizes a haven for immortals.

In Chinese mythology, a turtle is held sacred. They compare it to hermit sages, particularly an immortal “Taoist” on the basis of its varied characteristics such as slow breathing, steady and determined movements, and composure. Also, being one of the longest surviving animals, it stands for endurance, longevity, wealth, and wisdom. The Chinese further contend that it contains the secret of earth and heaven in its body; its shell being arch-shaped resembles the sky, whereas its flat body is akin to the Earth. Often, certain animals are enjoined with it such as the dragon-headed turtle to mainly empower its symbol.

Turtles aligning with the water element are held sacred according to Feng Shui, significantly, a black turtle represents a happy and good relationship. Hence, people still place turtle figures made of crystal, glass, or metal at the back door for attracting luck and blessings.

A baby turtle’s return to the sea symbolizes returning to God, under His guidance.

A sea turtle symbolizing permanent happiness was employed by the Buddha to signify the immense opportunities that humans receive upon taking birth.