What Does a Whale Symbolize

A whale symbolizes the power of strength and wisdom, carrying your history, and having an uncanny ability to communicate and heal, while also representing emotional rebirth.

If this mammoth mammal is your totem or spirit animal, it means that you should learn to listen to the voice within by turning to your inner self.

Just as the whale often emits a talk or a song, and moves along its path all alone, you too should learn to read through your own emotions and follow them accordingly in life to move ahead.

The whale teaches you to stay close to the truth and shrug off all worries and problems in life. It also says that you should arrange your life with harmony and peace by taking it seriously.

You possess a blissful character with wisdom, and strength of both mind and body. This spirit animal teaches you the importance of community life as well as dedication to your family. 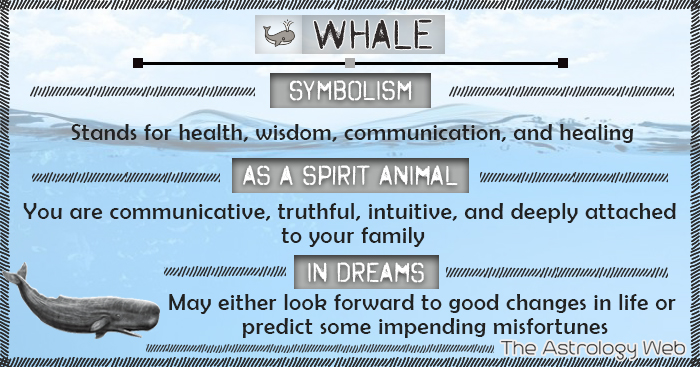 Dreaming about a Whale

Seeing a baby whale in a dream implies that you are looking for an authoritative figure who can lead you in your way.

A dead whale represents that you have given up on your aims in life.

Witnessing a flying whale says that you have released all your tensions and anxieties, and have finally found solace.

Seeing the whale’s fluke (tail) signifies that your life is well-balanced at the moment.

A whale’s teeth or bones in a dream are suggestive of some authority in you that can overpower others.

Different Types and Colors of Whales in Dreams

The blue whale (great blue whale) represents lavishness, plentitude – a supply of more than what is required.

The pink whale signifies that there is something sweet in your life, waiting for you.

The grey whale represents darkness or confusion about something in your life that you are keen to know or understand.

The orca (killer) whale is the spiritual representation of your own ‘self’.

The pilot whale represents the spirit of adventure, quest, and curiosity.

The sperm whale is the symbol of physical and mental strength that you always seek to possess.

The humpback whale signifies a period in your life marked by several changes but followed by a mirthful romantic affair.

In Biblical literature, there are several references to the whale, among which, the most famous is the striking story of Prophet Jonah who was swallowed by a whale and lived in its stomach for three days.

Legendary psychologist Carl Gustav Jung has found a relation between the whale dreams, the self, and the individual’s mother or the subconscious femininity. If a whale swallows someone in a dream, it might be a symbolic representation of a dominant mother or mother figure or the attachment of the dreamer with his/her mother that resists the individual from growing up as an independent entity.

Jung also says that, depending upon situations in life, such a dream might also represent the descent of the dreamer into the realms of his unconscious level in an attempt to discover his/her inner self.

In the Native Indian Tribal Culture

The Native Americans showed immense honor and reverence to the whales, considering them as a symbol of wisdom and awareness.

People fond of body art believe that a tattooed representation of the world’s largest creature would bestow them with the power of inner depth, wisdom, self-perception, strength, harmony, and the ability to communicate.