What Does a Wolf Symbolize

A wolf stands for intelligence, freedom, shrewdness, loyalty, communication, compassion, intuition, friendship, awareness, power, trust, energy, spirituality, and togetherness. When you are lost, a wolf plays the role of a totem animal to show you the correct path and discover yourself.

Different Colors of the Animal

Black Wolf: Symbolizes the return of ancestral spirits who are trying to relay important spiritual messages.

To have a wolf as your spirit guide means that your instincts are strong, and they help you gauge a particular situation before making any move.

Friendly and exuberant, you can build good social connections with counterparts and keep yourself engaged with community-related activities.

You can be a trustworthy guardian and fulfill any responsibility assigned to you. No matter how busy you are, if any close one falls in trouble, you rush immediately to help. Due to this reason, you are respected and admired by others.

Highly organized and disciplined, you waste no time in accomplishing all your tasks. Also, you maintain diplomacy and avoid getting into any kind of arguments. 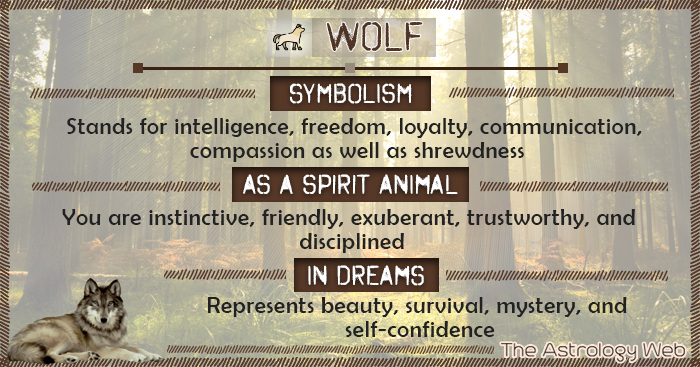 How to Know if Your Spirit Animal is a Wolf

Your passion to live freely and socialize with others could indicate that a wolf is manifesting its presence as a spiritual guide in your life.

When a Wolf Crosses Your Path

If you encounter a wolf on your path, it could mean that you need to restore harmony in your life and attempt to get out of the chaos unnecessarily created by you.

A Wolf Howling at the Moon

When you hear a wolf howling at the full moon, it might be a call for fulfillment of your desires and ambitions that could be possible if you connect well with your instincts.

Wolf in a Dream

A dream about a wolf represents beauty, survival, mystery, and self-confidence. It suggests you to keep your calm in every social circumstance and adjust with ease and dignity.

Getting attacked or chased by a wolf could mean that someone’s aggressive behavior is causing fear in your life.

To see a dream where you are killing a wolf signifies that you will gain success despite the obstacles in your path.

Fighting with a wolf implies that your enemies or rivals will not be able to harm you.

If you dream of a pack/clan of wolves attacking you, it could be a warning sign about an impending danger.

Taming a wolf in a dream marks the possibility of getting entangled in a ridiculous situation.

Turning into a wolf suggests that you are not showing your real self to others. However, if a wolf turns into a pup, it might reflect your nurturing side.

To dream of a wolf biting your arm means that you might face some health issues in the future.

Spotting a wolf with red eyes in a dream refers to the emotional side of your personality. Seeing a one with yellow eyes symbolizes your passions while a blue-eyed wolf stands for purity and self-respect.

A friendly wolf showing up in your dream assures positive changes occurring soon in your waking life.

A wolf running in your dream expresses your desire to lead a luxurious and fulfilled life.

A flying wolf gives you hint about your current growth period that’s giving you a chance to be confident and free.

A dream where a wolf is protecting you could indicate that you want to be loved by others.

Seeing a wolf growling means that you want to express your disgust at someone whom you dislike.

Hearing the howling of a wolf is a way of telling you take your stand and speak the truth.

An evil wolf could indicate that you are disappointed knowing someone’s unjust behavior.

The appearance of a giant/large wolf in a dream means that you are getting overwhelmed by minute troubles in your life.

Dreaming of a wolf underwater might point at your constant struggle with your turbulent emotions.

A dream about a wolf with a lion advises to be vigilant and careful in all your financial undertakings. On the other hand, seeing it with a bird like owl, raven, or eagle may suggest you to reveal your feelings to your close ones.

Sighting a lone wolf in your dream could mean that you want to break all the stereotypes and do something different.

A 3-eyed wolf suggests you to see and understand the reality rather than staying in denial mode.

A 3 headed wolf in a dream means that you should use your knowledge and intelligence to help others.

Eating wolf’s meat in a dream promises favorable opportunities knocking at your door.

The eyes of the wolf reflect your strong intentions to do something productive in your life.

The head of a wolf in a dream shows your domineering nature.

An arctic wolf appearing in your dream advises you to have patience and faith.

A white wolf indicates that you are trying to find a spiritual connection with your inner self.

Seeing of a black wolf in a dream suggests that you cannot run away from problems without facing them.

A yellow/golden wolf is a symbol of domestic peace, wealth, and good health.

A dream with a red wolf implies that you are highly energetic and cheerful by nature.

According to the Bible, a wolf appearing in a dream represents a beast that has an eagerness to seize everything.

In the Bible and Christianity

The wolf is depicted as a creature that devours human flesh and brings a human down to a beast. In ancient Christian beliefs, wolves are anthropomorphized, depicting a person who should not be trusted.

Ookami is a Japanese Kanji symbol for wolves. Some folklore has associated the wolf with mountains and found it to be both benevolent and violent. There are also certain Japanese myths about lone wolves protecting humans from danger.

A white wolf is a significant tribal symbol for some Native Indian clans representing strength, loyalty, and success at hunting. According to a Cherokee legend, a grandfather once told a story to his grandson about a battle between two wolves in which one represents anger, envy, and jealousy, and the other stands for joy, peace, and love. When the grandson asked who actually wins then his granddad says the one whom we feed.

The Chinese consider the wolf totem as a protector of the heavenly place.

When Rome was found, a bronze sculpture of a she-wolf feeding the twins was made and named a Capitoline wolf. It describes a story about how the twins, the grandsons of Numitor were thrown into the Tibet River by his brother Amullius and rescued by the wolf.

Here, the wolf is believed to be a creature with multiple personalities that may range from an evil to a noble priest, preaching gospels, similar to its human counterparts.

The Vikings considered the wolf as the most gruesome beast of the battles that embodied slaughter and murder and would always emerge as the winner.

In the Middle Ages Europe

The wolf has often appeared in the coat of arms of several royal and noble families symbolizing goodness and courage during the middle ages in Europe.

The Greeks believe that the wolf symbolizes the Gods of war, Ares and Mars. Also considered the Great Goddess, wolves were claimed by many Greek warriors as their ancestors.