What Does a Wolverine Symbolize

Wolverine is a symbol of bravery, courage, violence, ferociousness, aggression and fearlessness. Precisely, these canines symbolize everything that is threatening or threatening.

As a spirit animal, the wolverine instigates you to be extremely self-defensive, and resultantly, attack others for trivial or no reason. However, this is not something you choose to be, but this happens to be a part of your trait which you fail resist.

This means, you end up with two choices. First, you can utilize this trait in a better way and meet with success in your life, or else, give up to these vices, and eventually prove to be very unpleasant and repulsive to the others around you, thus making your own life an inferno.

A wolverine person can easily turn a relationship bitter, and hence, can’t expect others be good to them.

Just as a wolverine uncovers its teeth and claws when threatened or in danger, people under their totem-symbol reveal their negative sides when in dangerous situations, or under pressure.

The wolverine energy in you provokes you to attain success, power and position no matter how immoral or cruel the path to reach that height proves to be. With your totem as the wolverine, you are brave and courageous enough in handling even your worst enemies and hindrances.

Even though this weasel is full of negativity, we can spin some of their evil traits to get a positive twist out of them. Despite the vices, these traits also reveal your determination and willpower, which can act as your positive qualities in one sense. You can learn from this animal that, you must be fearless in attaining your goal. 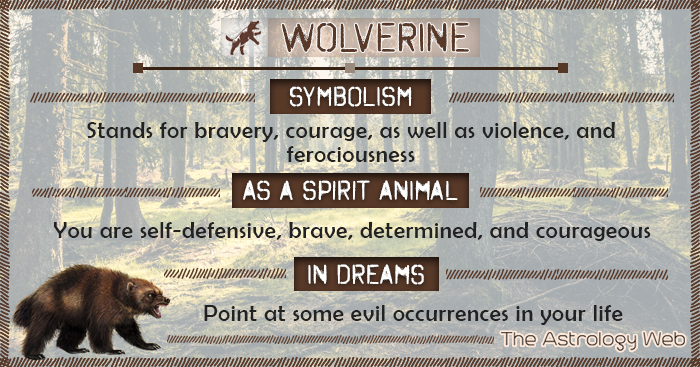 Dreaming of a wolverine in the woods is never considered lucky, but instead, a premonition of something connected to evil or negative energy. It is a bad omen that warns us of some impending danger or bad news.

A wolverine in the dark might want to advise you not to disclose about your personal life, or share any information with others. Be warned and learn to be tight-lipped, for you never know about that vicious someone in the crowd of your acquaintances who is out to get you.

An attacking wolverine signifies that you might land into trouble very soon. Life can also be a bit tough for you, making you double-minded while taking important decisions.

A group or a number of wolverines (more than one) together might be an indication that you have been targeted by multiple enemies, either individually, or as a team, that want to pull you down from the height you have attained, reduce your power or efforts, or plotting to cause you some harm. If you have such a dream, be careful and never do anything that might help others harm you. Look before you leap.

The Athabaskan tribe from Alaska admires this creature for its strength and endurance. They would often use wolverine teeth as a charm on the baskets of their babies.

A few tribes hailing from Northern California consider this canine lucky and believe that these creatures are successful gamblers. To them, seeing a wolverine brings in good luck very soon.

The Innu people, Native Americans from Eastern Canada, believed that these animals were the last creators of the world and would worship them with both fear and reverence. These indigenous people hold a lot of appreciation for wolverines.

Being uncertain about its intentions, the primitive Russian civilizations and cultures regarded wolverines as the symbol of aggression, fear and violence. Some of these existing cultures still hold the belief to this day.

As an animal, the wolverine was unknown in many corners of the world before the success of the Hollywood movies ‘Wolverine’ and ‘X-Men’. Even a search on the internet would retrieve mixed results between the creature and these movie characters. The mammal is still unknown in many parts of the world, and if asked, many people would identify the ‘wolverine’ as a movie character.