What Do They Symbolize

Close relatives of butterflies, moths are like the opposite of everything a butterfly stands for. If the vibrant butterfly is the fairy of the day, moths are the creatures of the night – beautiful in their own mysterious way. They stand for death and endings, the mysteries of the afterlife, and since one ending only leads to a new beginning, moths also symbolize rebirth, transformation, and survival.

Moths are drawn to light to such an extent that they would jump into a flame to get closer to the light. Scientists have tried to explain this phenomenon as a result of moth’s evolution as a nocturnal creature. To be able to navigate in the dark, moths orient themselves based on the position of a celestial light source, like the moon or a star. However, the artificial lights on earth confuse them and cause them to land right at it. So much so that it can destroy them.

We can learn a valuable lesson from this – as humans, all we ever do is try to find happiness in earthly things like money and fame. However, we should really be seeking the higher truth – the truth that’s right inside us. Seek yourself, know yourself, and do not get distracted by the ‘artificial lights’ of this world.

Since this might seem a bit too heavy, it has led to some superstitious beliefs that associate moths only with bad omen and death. But on a brighter note, their ability to navigate in the moonlight associates them to intuition and psychic awareness. In another less common belief, moths signify allurement and attraction, in association with how the female moths release pheromones to attract males.

When you see a moth, it is probably there to remind you to stay true to yourself, have faith in who you are, and move forward in life. If it lands on you, it is definitely time to listen to your own heart on a matter that’s on your mind. On the other hand, seeing a dead moth might mean that you have strayed from your path, and it’s time to set your priorities straight and get back on track to achieve what you desire.

A moth in your house could be there to warn you against some enemies that are trying to harm you, and your relation with your loved ones. The enemies might be closer than you think, so brace yourself to fight back. But if you find a lot of moths inside your home, it could spiritually stand for the arrival of good news, some new beginning (unless they are nesting in your pantry!).

These meanings might vary a little based on what type of moth you are seeing and its color:

In Different Cultures and Religions

Some tribes view moths as sacred creatures, while to others, it might appear as a symbol or messenger of death – a meaning most significantly observed in the symbolism of the death’s head hawkmoth with the typical skull pattern on its back.

The Chinese Qingming Festival, celebrated throughout the country to pay tribute to dead ancestors, is believed to have a peculiar connection with moths. In April, when the festival is held, an abundance of moths are found to hover around, representing the souls of those departed.

The Japanese also see a moth as representing the spirits of the departed in their afterlife.

The black witch moth, with its large bat-shaped body and enormous dark wings, is believed to be the harbinger of death. It brings bad luck to those who happen to see it.

Even in Hawaii, black moths are linked with death.

In the Bible, moths are associated with irreverence, symbolizing the contrast between the eternal justice and peace of the House of God and the vanity of sin and humankind.

The changes that a moth undergoes in life are believed to suggest a number of things – the egg stage stand for the conception of an idea, then the larvae stage stands for a foundation, and its chrysalis phase signifies manifestation. Lastly, its growing wings imply taking flight towards success and glory.

As Your Spirit Animal 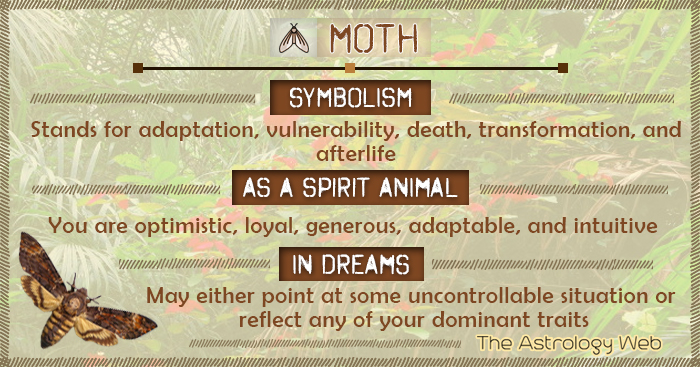 Having the moth as your spirit animal means you can survive and adapt to every situation through your faith in yourself and your strong intuition.

If you feel a special bond with this celestial creature, and believe it to be your spirit animal, it will always be there to guide you through life. Whenever you feel lost or confused, you can count upon it to lend you its power and teach you to love yourself again. It will be there to help you discover yourself and get ahead because you are all you have in life.

Pay attention to the greater world around you, as well as to your dreams. If you feel drawn towards the mysteries of the creature, and if it keeps appearing in front of you, or in your dreams, it will be good for you to listen. The moth will help you understand that it’s never too dark to ‘see’. You can always find the light right within you, and once you do, you will never be in the dark again.

You are not one of those who sit around and procrastinate but seize your opportunities without hesitation. This is why ‘moth people’ are always ahead in life, utilizing their full potential to achieve greatness.

As an animal totem, the moth stands for reformation or metamorphosis, and it can show up in your life to urge you to take a closer look inside inside yourself. Consider carefully what you are going through in life, and what is making you lose faith. It is time to face these issues and retake control.

Dreamt about a moth? Find out what it means.