The Ten of Swords Tarot (10 of Swords)

What is the Ten of Swords Tarot

The Ten of Swords is a card that belongs to the fourth suit (Swords) of the fifty-six cards called Minor Arcana in a traditional seventy-eight tarot card deck. Used for both playing and divination, its suit element is air.

How is the Ten of Swords Depicted in the Tarot Card

The Ten of Swords is represented by a man lying face down on a crass surface with ten long swords stabbed into his back in a row. He is covered in a red cape from the lower half of his body.

In front of him lies a water body, probably a sea, and above is a pitch dark sky. A hilly landscape can be seen at a far distance from where sun arises.

Meaning of Ten of Swords in the Tarot Card

The 10 of Swords signifies a sudden downfall and unexpected failures, resulting in complete loss of power regain control and fight back. The man depicts the lowest point in one’s life marked by the worst experiences. The swords represent words and ideas that want to implement death before rising again.

While the dark sky stands for ill luck, loss, pain, and fear, the sea represents calmness. The sun rising from the hills indicate a new beginning after a long spell of darkness to gain victory.

The Ten of Swords As a Person (Significator)

It refers to a person who is caught in struggles and extreme hardships, trying to find a way out. It could actually mean freedom from some toxic relationships or a stressful job. Such a person likes to sulk and gloom over even though he knows how to improve the situation. He may come across as cold and aloof with a tendency to end everything violently.

You may feel let down due to some unexpected circumstances in your life. You are feeling emotionally drained, trying hard to find out a way.

Don’t take too much strain otherwise, you will falter miserably without getting any positive results. You have already seen the worst, and so let it go without keeping any bitter feelings. 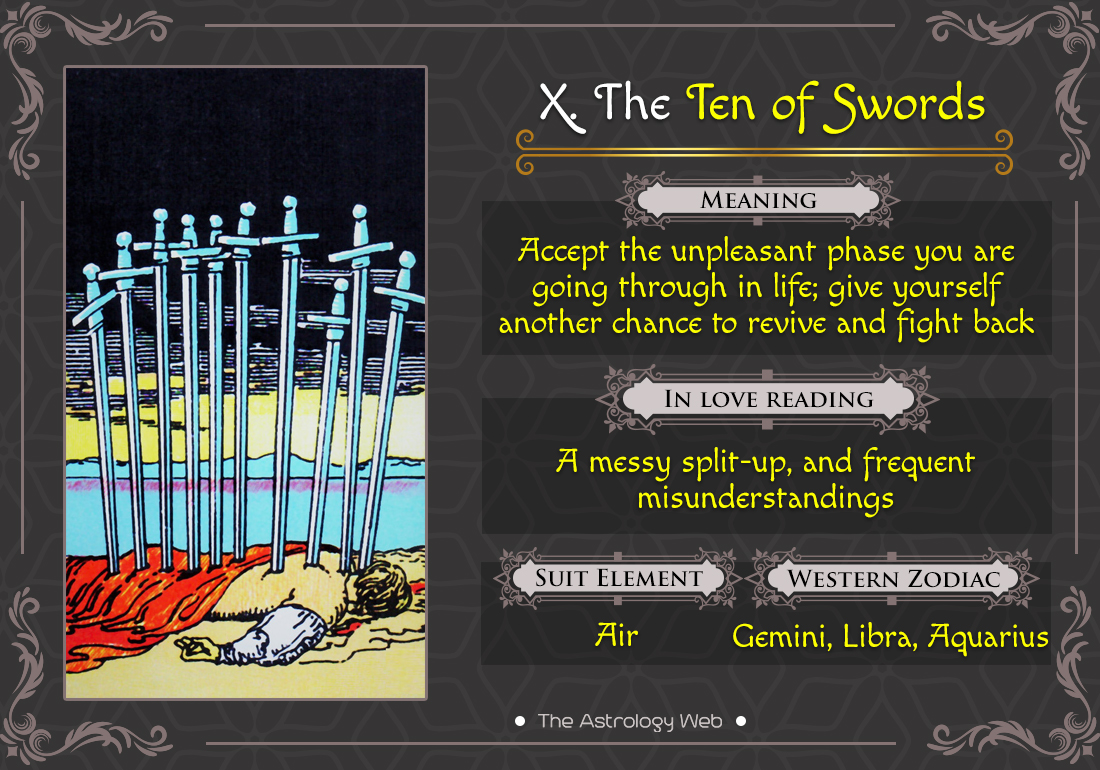 Interpretation: In this position, it indicates that you are facing a disastrous situation with no other choice other than to accept it. It could also mean backstabbing by someone close to you, resulting in utter shock and emotional breakdown.

The card suggests you take the hit as it would not be possible to reverse the circumstances. If you see from a positive angle, the sufferings and losses are gradually coming to an end, giving you a chance to make a fresh start. So, stop victimizing yourself and face the challenges.

Interpretation: Those who are in a relationship might not be able to keep it up due to unnecessary misunderstandings. Maybe you became too accustomed to an unhappy and unhealthy relationship that breaking it was never in your mind.

If you are single, there would be many suitors coming to meet you. However, to know whether they fit the bill, you have to wait and watch.

Ten of Swords Tarot Reading in Other Situations

Career and Work: Your work-related troubles will come to an end, signifying the start of a new phase in your career. After a hard time, you may consider switching your job to come out of the mess.

Finance and Business: The 10 of Swords is not favorable in a financial Tarot spread since it’s an indication of failure. At this point in time, being extremely careful about financial dealings will keep the risks at bay.

Health: Due to extreme stress, you are physically and emotionally exhausted. Take some time off till you are able to come back in the same mental frame. 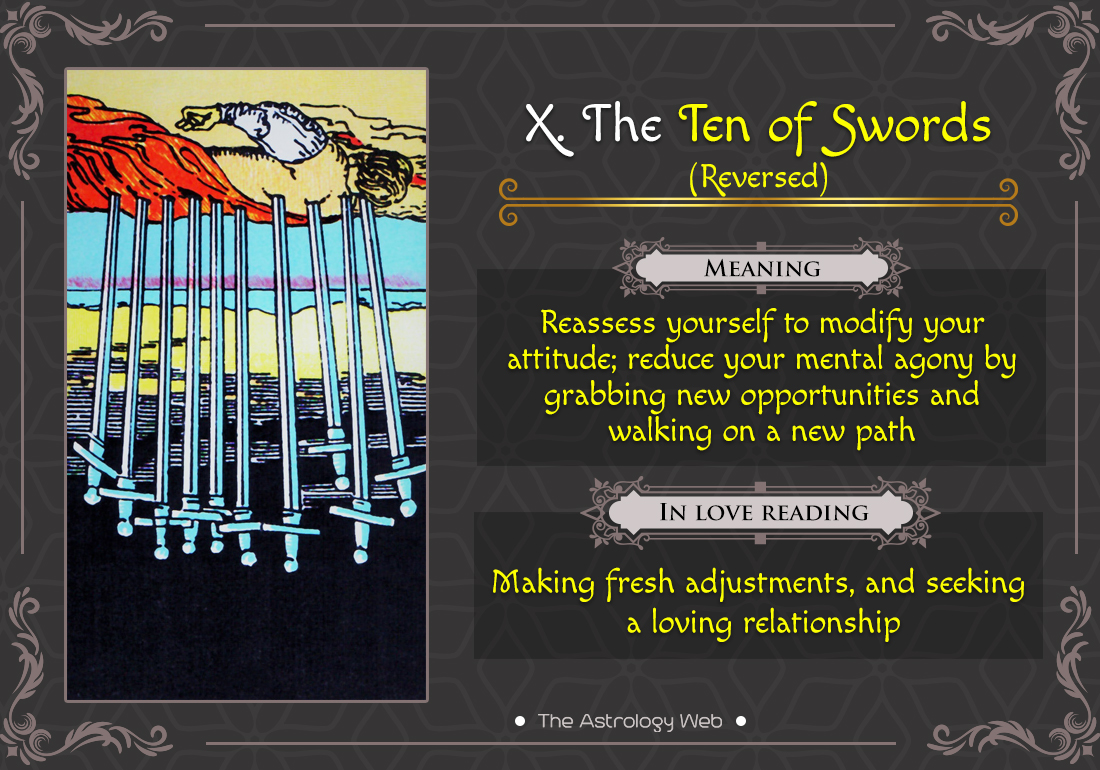 Interpretation: In the upside-down position, the 10 of Swords could mean that you are undergoing a self-evaluation, trying to change your attitude towards life. Slowly you are realizing that anything can be started from the scratch.

Don’t dwell on the past for too long since you have a fair share of chances to make everything alright again. Choose a new direction, do a reality check, and then think about your future course of action.

Keywords: Ready to compromise in a relationship, finding true love

Interpretation: You are trying your level best to mend your relationship by changing your nagging nature. However, don’t take the blame for everything to keep make your partner happy.

Ten of Swords Tarot Reversed Reading in Other Situations

Career and Work: You have taken enough stress at work, right from handling false allegations to meeting deadlines. Since you have crossed the hurdle, you no longer want to be associated with your work, and hence looking for better career opportunities.

Finance and Business: If you are running a business, it could either revive or collapse completely. The same goes in the case of your financial investment. Nevertheless, you no longer regret as there is better scope in the future.

Health: Despite have negative thoughts about your health, you will all of a sudden get a new energy to overcome your current illness. Don’t feel shy to seek support from others.

The Ten of Swords in Different Positions in a Tarot Spread

Past: It could refer to a past event where everything was messed up, but you coped well, making it till here. This clearly shows how much you have grown as a person.

Present: You very well know that something important is about to begin or end, changing your life forever. Although you cannot fathom the situation, it would be better to prepare for the worst.

Future: The path on which you are walking will lead to more problems. If you want to achieve your goals, you have to bring drastic changes in your life.