What is the Chariot Tarot

The Chariot (VII) is the seventh card in a suit of twenty-two cards, called the trumps or the Major Arcana in a traditional 78-card tarot deck. Also known as Centurion or Victory, it is used in game playing as well as in divination. The ruling planet of the Chariot is Moon and element is water.

How is the Chariot in the Tarot Card Depicted

A princely figure stands strong and determined before his chariot drawn by a pair of horses or sphinxes, a black one on the left, and a white one on the right. He holds a small wand, and on his head, there is a golden crown with a floating star. His battle attire consists of a breastplate, frilled metal forearm, and a gold belt with astrological symbols. On his shoulders are two crescent moons facing outward. The front part of the chariot is adorned with blue wings and over it is a veil covered with stars. He is stationed half on land and half in water, with the spires of the kingdom’s castle appearing behind him, beneath a golden sky.

What Does the Chariot Mean in the Tarot Card

Linked with the astrological sign of Cancer, the Chariot implies that you would have to face a lot of hard work in future, but with endurance and ambition, you’d eventually succeed. The crescent moons on the shoulder of the princely figure refer to the world, the star crown and laurel symbolize the highest man can achieve during his quest for spiritual evolution. The square on his chest may either symbolize earth or present the Kabbalistic view of the four worlds.

The two different colored horses stand for duality or opposing forces, suggesting how the Charioteer needs to have control over both. The six-pointed stars embodying celestial influences guide him in his path of enlightenment as he leaves behind civilization. The disk appearing below the wings is a symbol of Isis, the Egyptian goddess of magic and mothers.

The Chariot as a Person (Signifier)

How Someone Sees You: The card signifies a strong-willed, diligent, brave, and controlling person. He has the ability to attain great heights, provided that he puts his mind into it. Sometimes, he may even be fake about his confidence. 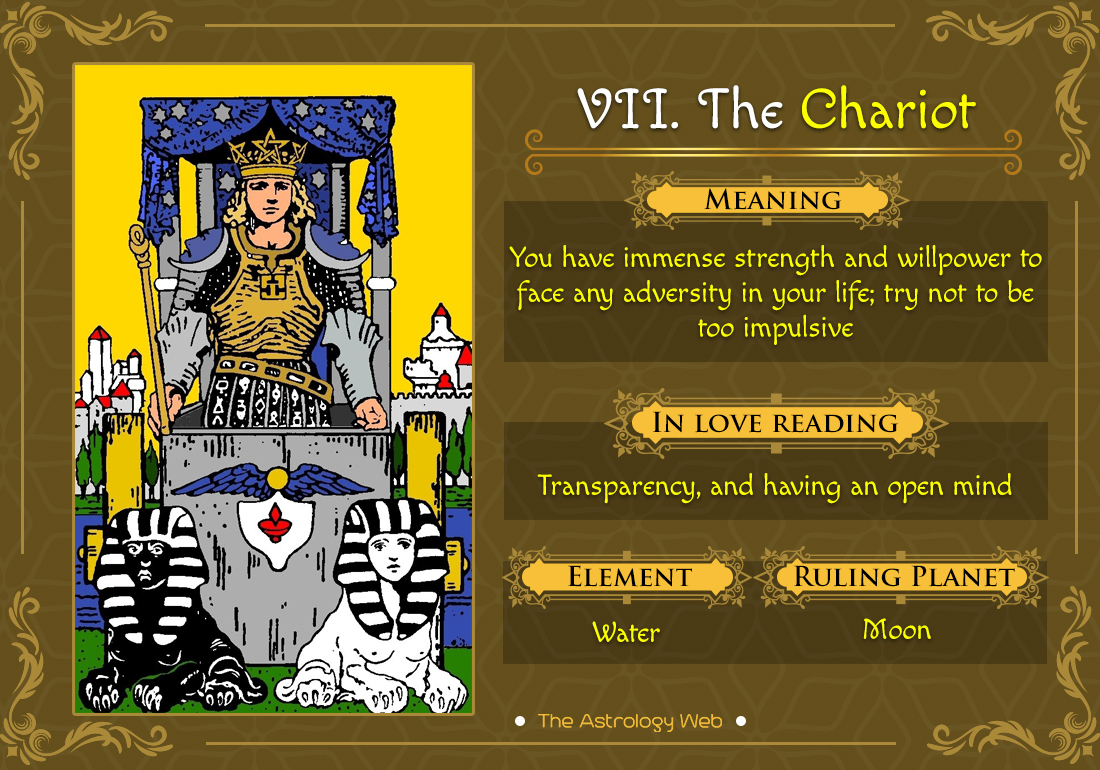 Interpretation: It indicates that with the appropriate use of willpower, confidence, and discipline, you would be able to overcome all oppositions.

The card admonishes you to be bold but stresses on dominating your aggressive impulses so that you can channelize them into something more creative.

Symbolism: Importance of self-love, being open, moving ahead

Interpretation: If you are single and looking for love, then it may happen that you enter into a relationship with someone since it has felt right. However, it may not turn out happy for both.

For those in a committed relationship, the card urges you to be honest with your feelings and communicate what you feel to your partner.

If the card comes up after a breakup, the implication is that you must move forward, considering it as a temporary hurdle.

Career and Work: The card advices you to dissolve small issues, stop worrying about how your work is perceived by others and just do your best to achieve success.

Business and Finance: Since finances are doing well, you are likely to spend money on purchasing something related to transport. However, you need to save money too. Strive to pay your debts first and maintain a disciplined outlook to enjoy financial stability.

Health and Wellness: The card looks forward to your vitality and influences you to start on a fitness plan so as to reap the benefits of a healthy life. 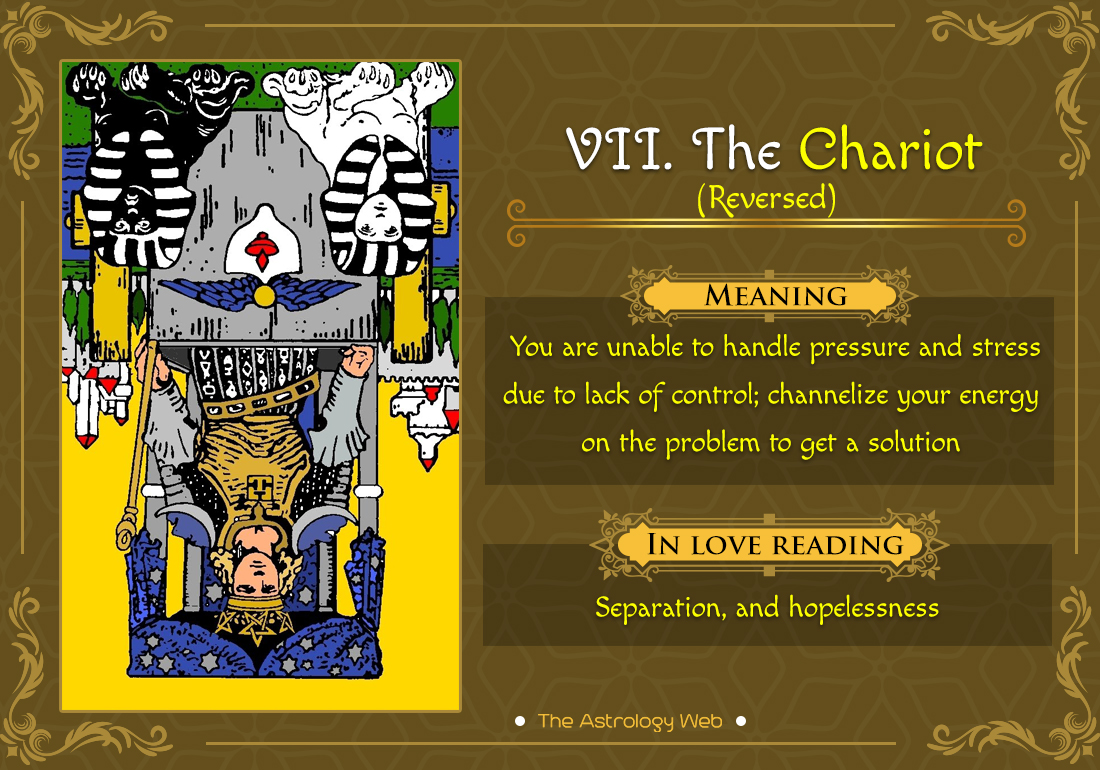 Interpretation: In an upside down position it indicates your present feelings of loss and power resulted due to your failure to control the opposing forces.

It may also suggest that you are breaking down under pressure.

Instead of worrying about the things you cannot control, focus your energies on what you have and strive to change the situation.

Interpretation: You may feel hopeless since the relationship does not seem to have any future. You may even seek a break even if temporarily.

Recognize the failings in your bond and strive to attain a solution that befits both.

The Chariot in Different Positions in a Tarot Spread

Past: The card stresses your past struggles that have strengthened you, and aided you to achieve prosperity.

Present: Finally, you are in a position that is rewarding and filled with happiness. However, though you have waited for it for months, you may feel uneasy about being in control.

Future: By steadfastly maintaining your efforts, you would be able to gain honor and recognition.

Chariot Tarot Meaning in Combination with Other Cards