What is the Death Tarot

The Death is the thirteenth card in a suit of twenty-two cards, called the trumps or the Major Arcana in a traditional 78-card tarot deck. It is used both in game playing as well as in divination. The ruling planet of the Death Tarot is Pluto and its element is Water.

How is the Death in the Tarot Card Depicted

The card often depicts Azrael, the mythical Angel of Death. The card of Death generally portrays a complete human skeleton bearing a dreadful face, clad in a black armor, and often riding a black horse, holding a sickle, which again is the direct symbol of death. The skeleton is surrounded by a number of corpses, and those dying. They come from all classes of the society, including monarchs, bishops, as also the common people.

What Does the Death Mean in the Tarot Card

The Death in the card represents invincibility, purity, bravery, sacrifice, and realization. Tarot experts believe that the death card does not actually imply the death of the human body, or the physical death itself, but it is just the termination of mundane or humanly things like relationship, interest, etc., and hence, relates to the development of the mind and reaching the level of consciousness.

The Death as a Person (Signifier)

The death tarot could indicate someone who is always surrounded by many different kinds of friends since they have very nominal oddities in them and are always interesting to others. They also love excitement, sensuality, sex, and are quite different from the others for which they are proud. The seeker also has a spiritual side which they often want to hide from others and might end up being loners. They also have a love of knowledge and are good at keeping secrets.

Interpretation: It symbolizes the termination of a significant aspect of your life, which in turn might bring in the beginning of something else more valuable. Though you might initially find it difficult to move on with new things and changes, eventually it’s you who would be the gainer.

Keyword: End of a relation

Interpretation: For couples, a frank discussion may be needed about your relationship, and it’s for you to decide whether you still want to be with the person, or break up. Either way, happiness is always there for you, waiting, and it’s for us to move out and find it.

Education: Education might be on the cards, but you might need to face tough competitors or even such situations that might stand as a hurdle, keeping you from reaching your goal. Be aware of anyone’s sinister intentions in your educational front – school, college, university, and so on.

Career and Finance: If you do not like your job, but still do not have plans to leave since it’s your source of steady income, or else, you are underemployed, it’s time you leave your job at your own times since there are high chances of you losing it, either forced or fired.

As for finance, you might need to sacrifice your interests to cope with certain financial challenges. So, do not ignore any such problem you might find arising anew.

Health: You should learn immediately to manage your own stress and keep it under control, if you wish to be in good health. Whichever problem you face, handle it with prudence and diligence and confront it, rather than avoiding the same. All you need is good rest, and refrain from things like alcohol, something that might harm your body. 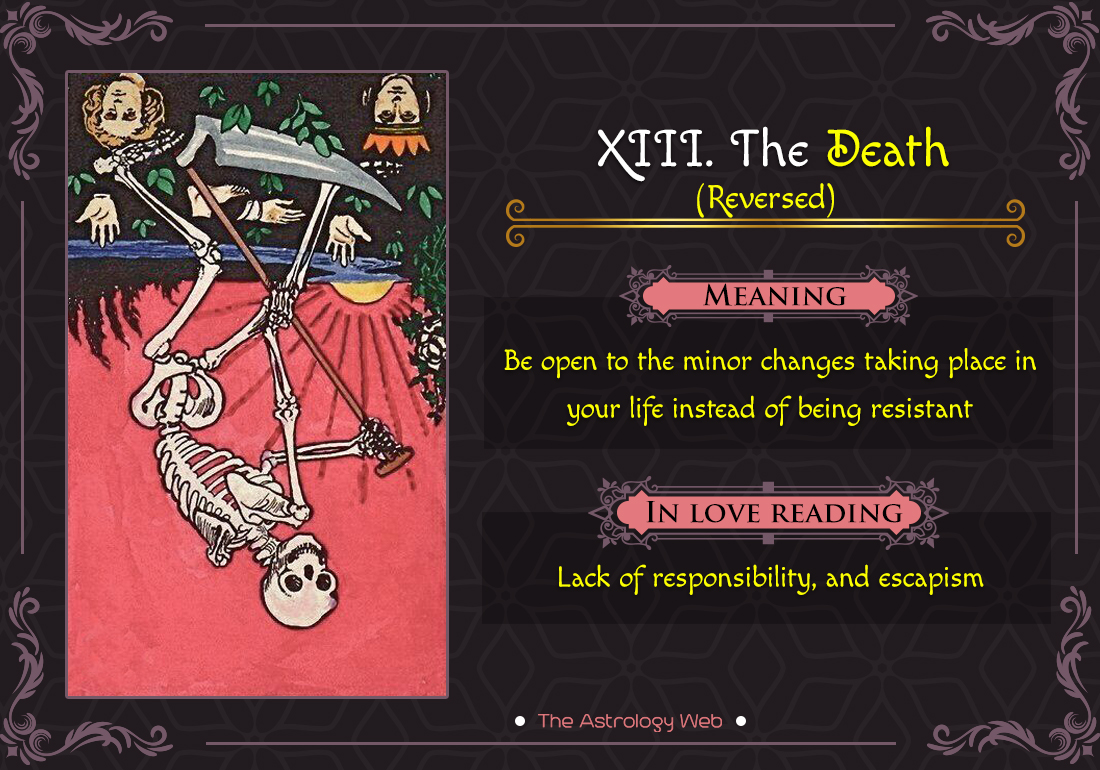 Keywords: Resistance to change, unable to move on

Interpretation: The changes about to come in your life are to be less intense as compared to the upright card.

Interpretation: For those in a relationship, the problems connected to the reverse side are less serious compared to the upright side. Face your problem and try finding out a solution rather than beating your head against the wall.

If you are seeking a new relationship, you might want to consider getting to know more people in a peaceful manner.

The Death in Different Positions in a Tarot Spread

Past: This card is said to be best in the past position since it signifies that you have already gone through the moments of hardship in your life, which you were powerless to resist. Be it a loss of a dear one, or a breakup, the Death in its past state no longer holds that grip in you, and hence can’t capture you anymore.

Present: The present position shows that you are trying hard and gradually whittling yourself down to the minimum in order to cope with a drastic change in your life. This might either be a big breakup, or a stressful situation related to your job or personal property, which you are striving incessantly to get rid of quickly, but in vain, since it is impossible and useless to fight against death. All you need to do is, accept your fate, and wait for the brighter days to arrive.

Future: In the future position, the death card is sarcastic in the sense that, we all know why death is inevitable; nonetheless, we are ever belligerent in resisting it. In its future-term, the card is indicative of forthcoming ‘death’ in a broad sense. It might involve the demise of an old friendship, a secure job, or a relationship that was previously strong.

Death Tarot Meaning in Combination with Other Cards