What is the Emperor Tarot

The Emperor (IV) is the fourth card in a suit of twenty-two cards, called the trumps or the Major Arcana in a traditional 78-card tarot deck. It is used in game playing as well as in divination. The ruling planet of the Emperor is Mars and its element is Fire.

How is the Emperor in the Tarot Card Depicted

The Emperor, with his long white beard going up to his chest, sits on a grey stone throne and looks straight at you. He wears a royal robe, is crowned and his legs and feet are covered in a metal suit. His right-hand clasps a royal staff, while his left-hand holds a golden globe. His throne is ornamented with the skulls of 4 rams and the orange sky behind him casts its glow on the barren mountainous landscape, making them attain a yellowish hue.

What Does the Emperor Mean in the Tarot Card

The Emperor, embodying the Masculine Principle, the Animus, and the Patriarch, initiates you to cultivate order and stability in life so as to achieve success. The long beard of the Emperor signifies wisdom gained through years of experience and his red robe signals his passion for life.

The royal staff or Ankh that he holds in his right hand is the Egyptian symbol of life and it represents the power he exerts over his dominion. The globe held in his left hand also justifies the same. His metal shoes indicate his unchanging authority and also the fact that he is always ready to take upon any difficult situation.

The 4 heads of the rams stand for determination, leadership, and action, whereas the mountains refer to his unyielding power thereby in tune with the image of the absolute ruler that he portrays.

The Emperor as a Person (Signifier)

As a man, you are fatherly, honest, regulating, competitive and also offensive. You never apologize for your behavior and love to get attention.

As a woman, you are bossy, rigid and fearless. 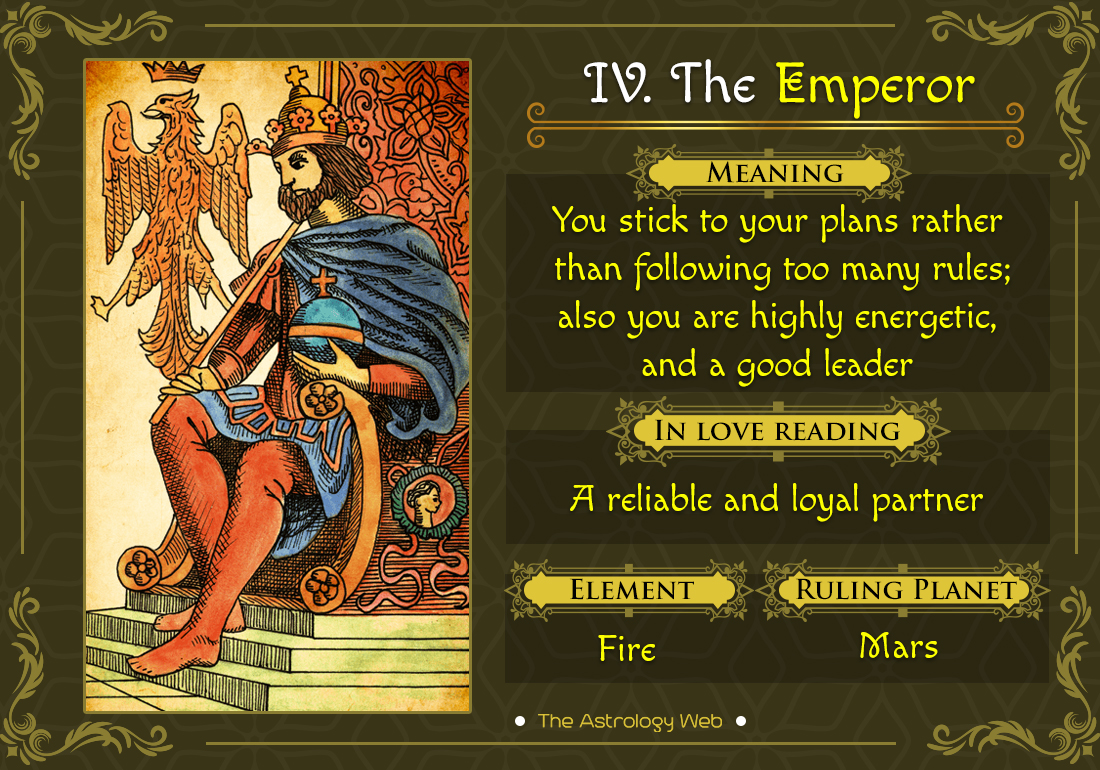 Interpretation: The card indicates that being wise, stable, and protective you remain ready to provide guidance to those near you.

You also stick to your plans and are inclined towards executing them in an organized manner. In fact, you are a born leader and on acquiring the right position you strive hard to achieve perfection.

You listen to what others have to say, but do only what you feel right, even if it means that you have to face opposition. Finally, you succeed and attain the recognition that you deserve.

However, too much adherence to rules may make you seem inflexible, thereby depriving you of presiding over with spontaneity and joy. So, be systematic but maintain a balance.

Interpretation: If you are single and looking for love, very soon you’d meet someone serious enough to go for a committed relationship. Those already in a relationship would find their bond growing deeper and deeper with each passing day. Even if you face problems, the card advises you to wait for the situation to become stable.

Women may find themselves getting attracted to older men and there may not be mutual affection from the very start, but with patience, the relation would bloom since your partner is a mature person who lives by order and logic.

Men, on the other hand, need to be more forward in their search so as to find their right soul mate. Maybe you are hesitating to express your feelings, not being sure of whether you’d be accepted or not. But seize the moment and claim the woman you love.

Work: The card promises smoothness in work and a recognition of your efforts. If you are searching for a job, you must step outside to analyze how you are observed from a logical point of view so as to find out why you should be hired. Thereafter, prioritize those areas that need improvement and attain success.

Business and Finance: Since you are blessed with a rational mindset, very much required in business, adopt a planned and pragmatic approach, focus on what you have and finally find your career niche, where your skills would be fully appreciated. It is by remaining positive that you would finally be able to grow financially.

Friendship: If you have faced some tough times lately, don’t worry, it will pass and you’d again reap the blessings of a strong association, with hard work and perseverance.

Health: The card generally predicts good health. However, if you happen to face any issue, be disciplined as you are and follow a course of action that is most appropriate, such as going on a restricted diet or doing exercises. 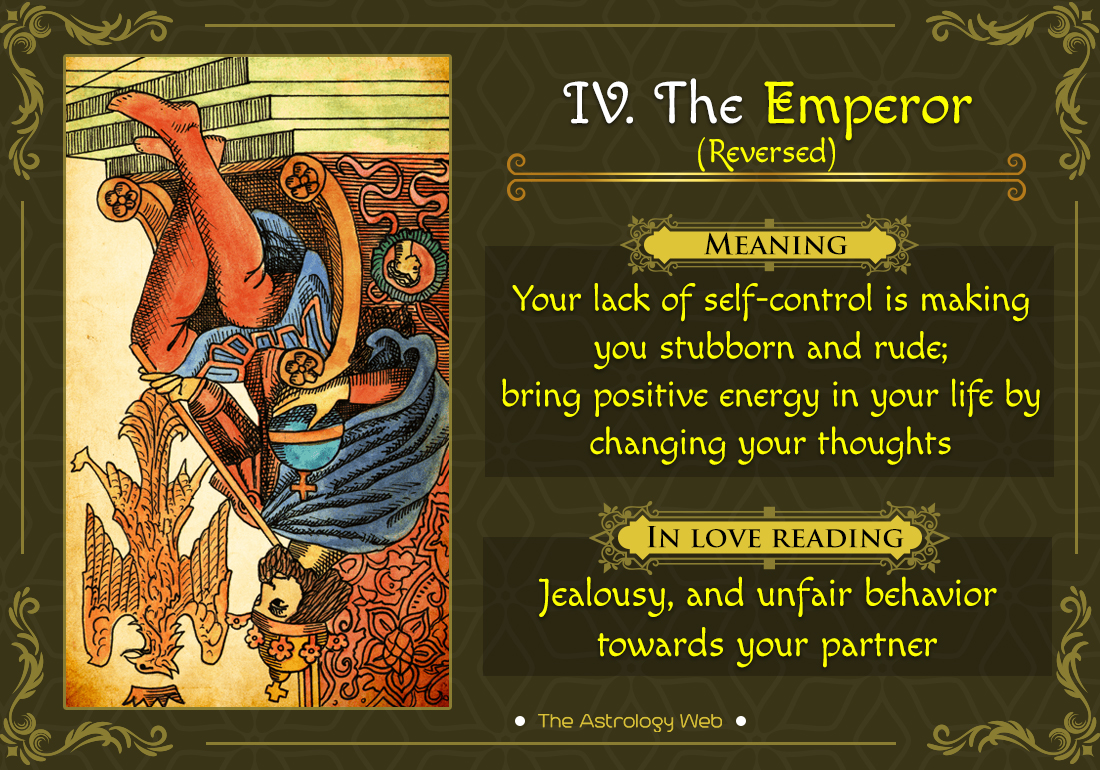 Interpretation: The card reflects your authoritative and rigid attitude that makes you lose self-control and in turn fall prey to inconsistency.

Alternatively, the card may also reveal the presence of a stubborn figure such as your father or boss before whom you need to assert your individuality to gain prominence.

It may be that being dissatisfied with your present situation, and unable to find a solution, you have unknowingly turned rude to those around you. Too much stress on structure has taken a toll on you, preventing the flow of positive energy and making you appear as an insecure man, very much in need of control.

What you need is some space in your routine. Be open to the support of trustworthy friends, take their advice to regain the positivity you have lost.

Interpretation: The card suggests that due to the overbearing attitude of your partner, you do not feel at ease and the relationship ultimately is under strain. Though you had desired security in your bond earlier, his high expectations of you are putting much pressure and you feel as if trapped.

So, have a fair discussion and thereafter try reconciliation if you feel that things can get better.

The Emperor in Different Positions in a Tarot Spread

Past: It throws light on a commanding figure that has played a significant role in your journey to success. It may also stand for the resolution of a recent conflict.

Present: The card suggests a strong position when you are confident enough to move towards your goal. It may also indicate someone experienced whose help is enabling you to flourish.

Future: Embrace the opportunities to lead in the varied roles that come your way, but it is only if you bear the responsibilities that you can make a mark.

Emperor Tarot Meaning in Combination with Other Cards