The Five of Swords Tarot (5 of Swords)

What is the Five of Swords Tarot

The Five of Swords is a card that belongs to the fourth suit (Swords) of the fifty-six cards called Minor Arcana in a traditional seventy-eight tarot card deck. The card is used for both playing and divination, and its suit element is air.

How is the Five of Swords Depicted in the Tarot Card

The Five of Swords illustrates a young man dressed in green and red attire with a vicious expression on his face holding two swords over his left shoulders and collecting the third one. He is staring at two people, probably his enemies, walking slowly in the other direction as a sign of defeat.

The other two swords are scattered on the ground.

Up above, the sky is filled with grey clouds while the gutsy wind blows the man’s hair.

At a considerable distance, lies an ocean with turbulent waves surrounded by hills.

Meaning of Five of Swords in the Tarot Card

The 5 of Swords signifies discord, disagreement, and troubles, leading to a heart-wrenching separation or defeat in the future. The red and green attire stands for passion and strength. The two people walking away from the man represent grief and unexpected loss.

The cloudy sky and the violent wind represent a hostile atmosphere where everything seems to be messed up.

The Five of Swords As a Person (Significator)

A rough and tough person with a competitive mentality who wants to win at all cost is a representation of the 5 of Swords. Such people love defeating others as well as create problems, causing conflict and disturbance in a peaceful setup. However, they are extremely insecure, fearing that their loss will result in others taking over them. In your life, such a person could pretend to be your friend, turning against you when the time arrives.

You might be holding on to anger for a long time, acting resentfully in every situation. Since the bitter feelings are hard to let go, your closed ones might be getting affected by your malefic behavior.

Since your interests are only limited to your welfare, you are least concerned about seeing the bigger picture, involving other people’s benefits as well. You will ultimately realize that gaining victory and power does not make one complete. 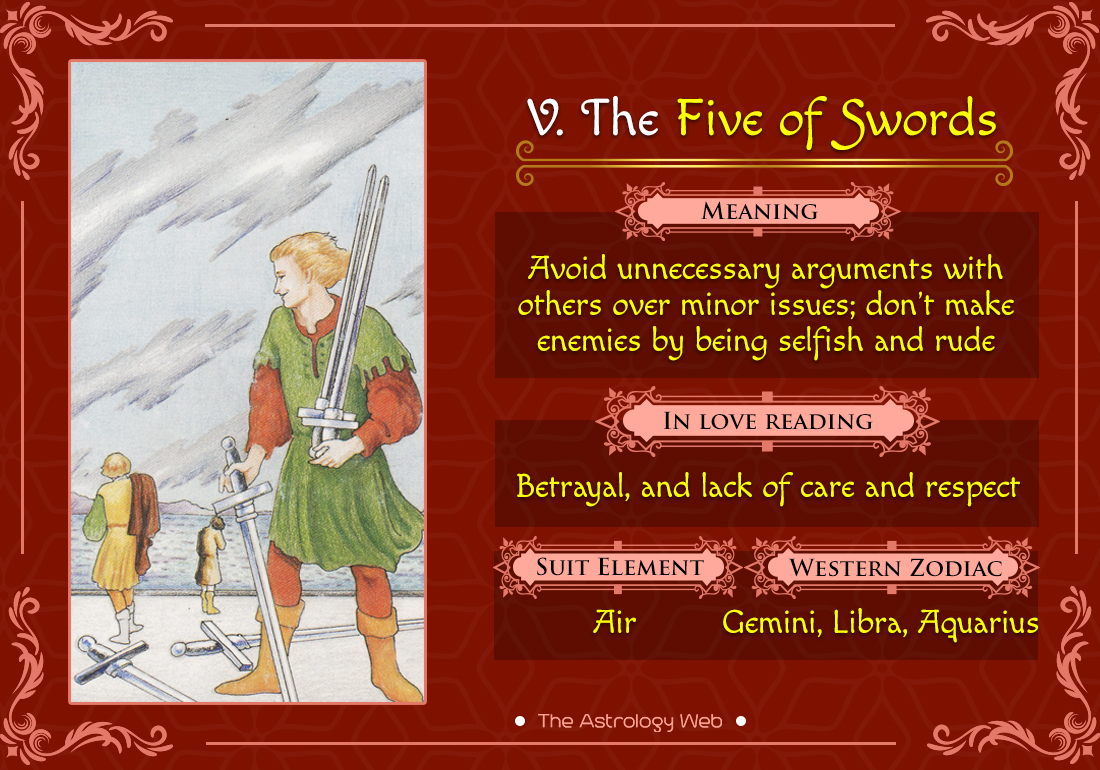 Interpretation: According to the appearance of the card in this position, you are simply getting into a huge conflict, arguing with others over petty issues in an attempt to win. This way you are creating bitterness in other people’s heart by hurting them, and ultimately making yourself isolated from them.

You have to decide whether sticking to your point of view without any logic is so important that your near and dear ones feel cheated and break the long-time bond. Don’t be too aggressive about achieving your personal objectives as you could be at the risk of a major downfall.

Interpretation: If you are in a relationship, lack of communication and care can create hostility with your partner. Since the card signifies infidelity and betrayal, you may decide to go the separation way.

If you are single, there is a high possibility of meeting people having a dark and deceptive side to their personality who may appear caring. So, don’t immediately get involved in a relationship without a proper background check.

Five of Swords Tarot Reading in Other Situations

Career and Work: The situation at you’re your workplace might not be as stable as many of your coworkers can have ill intentions to put your position at risk. It would be advisable to remain calm and patient till the storm completely passes out, and everything gets restored once again.

Finance and Business: Before making any transaction, watch out whether the money is being handled in a fair and legal manner. Acknowledge your mistakes and improve your monetary status rather than blaming others.

Health: Feeling drained after a long emotional struggle is natural, but don’t get into the bad habit of binging and drinking. If you do so, your health will take a backseat. 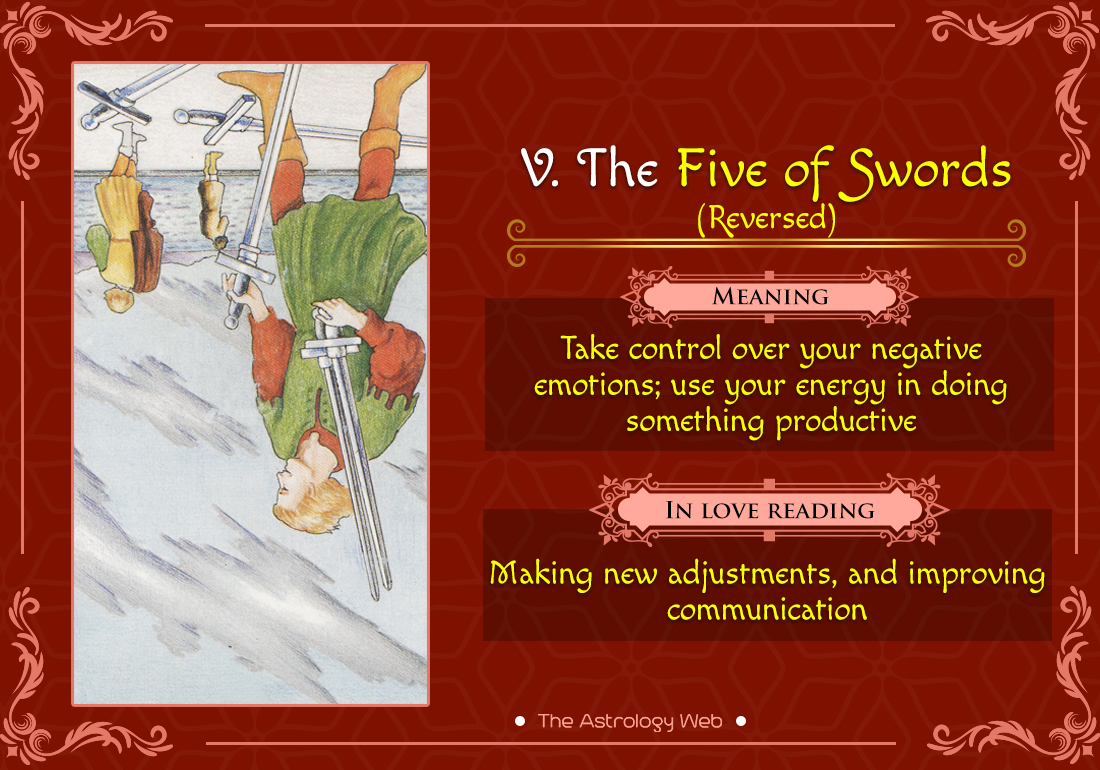 Interpretation: In the upside-down position, the card indicates that you want the period of tension to get over and start focusing on productive activities. Your energies are now being channelized into different avenues as you know the present conflict will only result in a loss.

At times, the past conflicts will nudge you to bring out raw emotions into play. However, you should know when to take control of your life by making the right amendments without thinking about winning or losing.

Interpretation: You have decided to let bygones be bygones by putting an end to your daily squabbles with your partner and spending more time listening to each other’s problem.

Five of Swords Tarot Reversed Reading in Other Situations

Career and Work: The ongoing tensions in your office might be coming to an end, opening a new channel of communication to sort out matters. You will understand the value of hard work when more and more challenges are overcome.

Finance and Business: Don’t get involved in any untoward financial dealing with a belief of gaining quick wealth. Try to take yourself away from the financial woes by using your analytical mind.

Health: Changes in dietary lifestyle will help you overcome your regular health problems. The more sacrifices you make the better results would be achieved.

The Five of Swords in Different Positions in a Tarot Spread

Past: Your past life reflects the struggles you have faced in the absence of a rock-solid support. Nevertheless, you have emerged strong and confident with too many feathers on your cap.

Present: The card specifies certain problems affecting you for a long time. Although the time is a bit tough, you should not suffer silence and take help from others. Also, avoid anything that is not constructive.

Future: Potential conflicts will arise in the days to come, and therefore maintaining steadiness is of utmost importance to discover alternate routes.