What is the Five of Wands Tarot

The Five of Wands is a card that belongs to the first suit (Wands) of the fifty-six cards called Minor Arcana in a traditional seventy-eight tarot card deck. Used for playing and divination, its suit element is fire.

How is the Five of Wands Depicted in the Tarot Card

While standing on a solid uneven ground, five men holding a wooden stick each in their hands appear to be involved in a scuffle. Their sticks are raised above their heads haphazardly, clanking against each other, giving an impression of a stiff competition.

The men are wearing a plain T-shirt, a hat, and a pair of stockings and shoes in different colors.

The sky above is blue with no single trace of a cloud.

Meaning of Five of Wands in the Tarot Card

The 5 of Wands is a symbol of conflict, tension, and unnecessary change that may impact one’s ability to move forward in life. The five men dressed in different colored attires signify a mix of various backgrounds, values, and beliefs. Their wooden sticks stand for child-like competition, fun, and unnecessary squabbles.

The uneven ground implies difficulty to go ahead in life.

The Five of Wands As a Person (Significator)

It stands for someone who does not like the presence of an authoritative figure due to insecurity and fear. Such people are always in a defensive and chaotic mood so that they can hide their flaws. As a result, they get exhausted and stressed by minute issues.

You may feel everyone around is testing your ability and proving you wrong. However, the more challenges you face, the stronger you become. Don’t be disappointed by criticism and discouragement. Instead, stay focused on your goals. 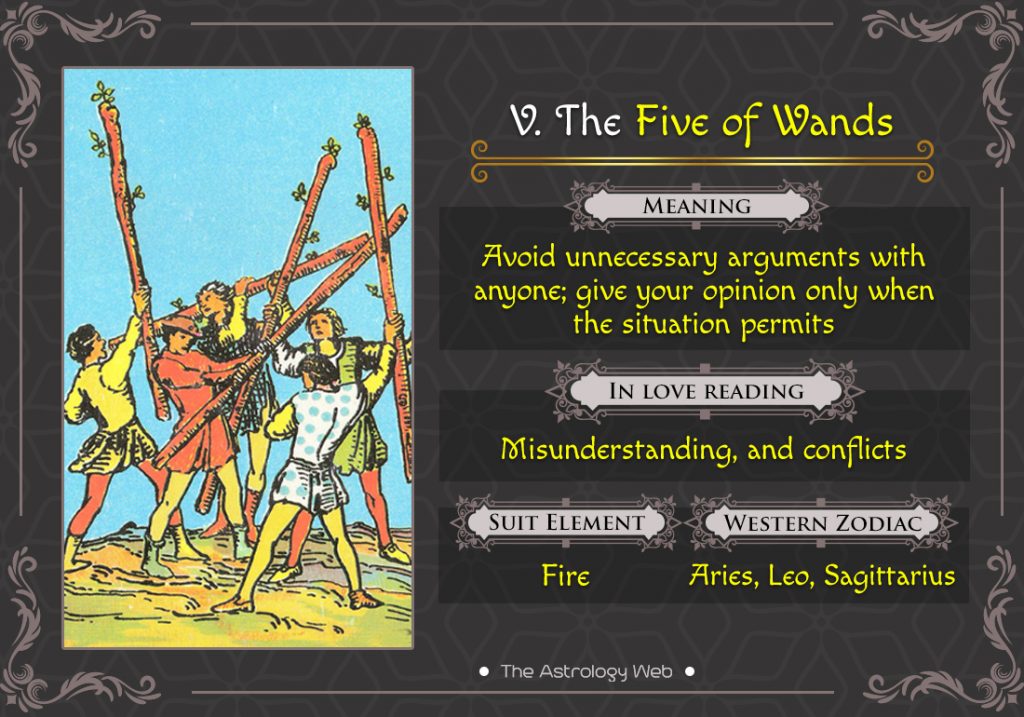 Interpretation: When the card appears in this position, it indicates that you are stuck in the middle of a major conflict, involving a group of people. Nobody is listening to each other, and even you seem to be thrusting your opinions. As a result of unimportant discussions and arguments, there is no progress.

It would be advisable to let everyone voice their opinions without any interference. Once done, you too give your point of view and decide the correct course of action. This way you can avoid a conflict and do something constructive.

Keywords: Arguments, struggle understanding each other

Interpretation: If you are in a relationship, the time will be tough handling each other. There would be frequent fights and confrontation over petty issues. Consider this difficult time as a learning phase to maintain a strong bond.

Those who are single might have many suitors competing with each other. Although you may enjoy the attention, don’t add more fuel to the issue.

Five of Wands Tarot Reversed Reading in Other Situations

Career and Work: Frequent clashes may occur between colleagues leading to a major chaos. As a result, any given work will receive a major setback, and your individual career plans would be affected.

Finance and Business: There might be certain issues regarding your monetary status. Maybe you have been overspending a lot or investing wrongly that could be the cause of your lack of savings.

Health: If you have been experiencing some health problem, there could be a possibility of getting well soon. 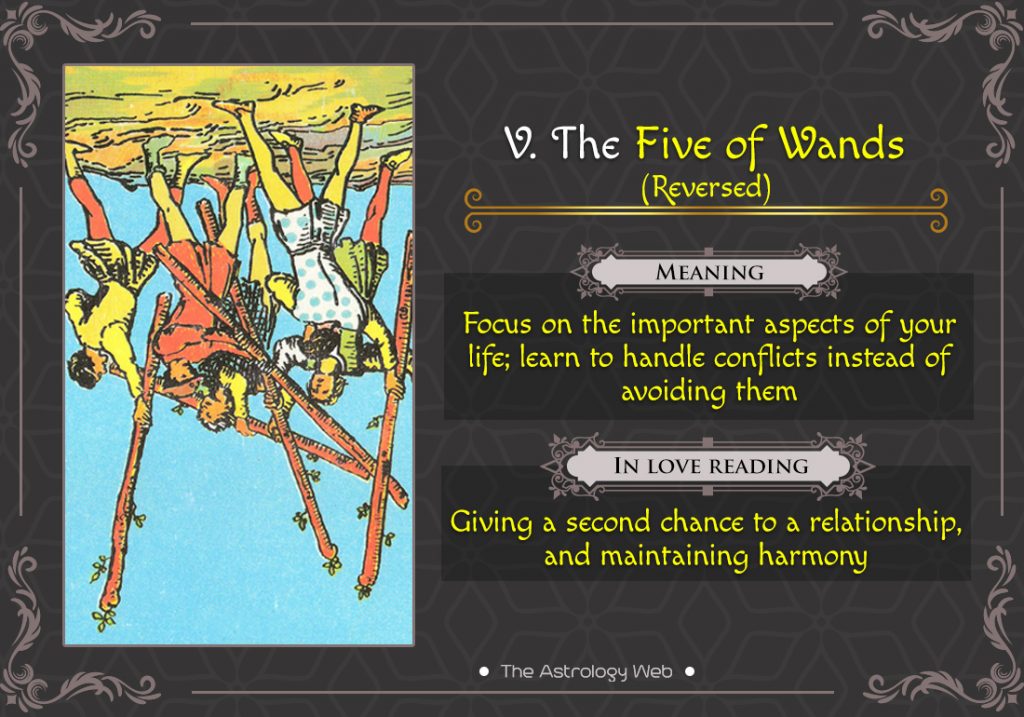 Interpretation: In the upside-down position, the card could mean that you are avoiding tensions and conflicts instead of dealing with them. Your tendency to run away from such situations might not be good in the long run as you may miss out on some useful discussions that could give solutions to your problems. Alternately, it might also suggest your ability to get through a struggling period by staying patient and calm.

The 5 of Wands advise you to concentrate on important things in your life like relationships, career, and health. If you are able to control your anger and handle a conflict well, there would be newer opportunities knocking at your door.

Interpretation: You and your partner have decided to bury the past and start all over again. Now you want to enjoy some peaceful and happy moments in your love life without getting into any fight or argument.

Five of Wands Tarot Reversed Reading in Other Situations

Career and Work: In the reversed position, the card shows that at your workplace the minute tussles will be resolved and everyone will work as a team. There would be less competition and more cooperation to make a particular project successful.

Finance and Business: You are finally coming out of your financial struggle and making a comeback. Issues related to money and properties should be given priority now to make up for the previous loss.

Health: More care needs to be taken if you want to get well soon. Don’t stress yourself too much and practice some relaxation techniques.

The Five of Wands in Different Positions in a Tarot Spread

Past: Since you might have a major fallout or fight in the past with close ones, the old memories are causing disturbance and preventing you from moving forward. Don’t waste time finding the reason and focus on your goals.

Present: The current period is stressful with lots of challenges to face. Don’t let your emotions create a ruckus and spoil the situation. Try to control yourself and battle the problems out.

Future: The coming days might not be quite favorable as a major conflict is on the card that could make you feel repentant. Think about it and stay prepared for the negative events.