The Seven of Swords Tarot (7 of Swords)

What is the Seven of Swords Tarot

The Seven of Swords is a card that belongs to the fourth suit (Swords) of the fifty-six cards called Minor Arcana in a traditional seventy-eight tarot card deck. Used for both playing and divination, its suit element is air.

How is the Seven of Swords Depicted in the Tarot Card

A man with five swords in his hand seems to run away sneakily from some type of a camp, probably representing an act of stealing. The two other swords are standing on the ground behind him.

Faraway on the left side of the side, a group of soldiers can be spotted, and one of them is raising a sharp weapon or a flag.

The sky above appears golden with no clouds.

Meaning of Seven of Swords in the Tarot Card

The Seven of Swords symbolizes betrayal, cheating, and a tendency to get away with everything without getting caught. The seven swords signify unethical intentions and misappropriate behavior.

The group of soldiers means finding out a secret that had been kept hidden for a long time.

The Seven of Swords As a Person (Significator)

Someone who is inefficient and unavailable represents the 7 of Swords. Since he is poking his nose in everyone’s business, nobody would be too fond of him. Although a clever and charming figure, he always to use dishonest means to gain success. If there is a peeping Tom in your life who has an interest in your personal happenings, it could be him.

As a Seeker, you might want some personal space without anyone interfering in your private. You may prefer standing at a safe place and watch the world without getting involved or sharing your thoughts.

Sometimes circumstances may compel you to be a bit sneaky and dicey. However, you need to know the limit as small lies can snowball into a major problem.

Interpretation: According to the Tarot reading, you may often find it challenging to get unnoticed while doing an activity secretly. At times, acting shrewd is necessary, but it should not be done at the cost of someone’s trust. Also manipulating other people to fulfill your desires can ultimately lead to utter embarrassment.

You need to understand that your actions would have a huge impact, resulting in strained relationships with close ones. Consider a more ethical approach to build a good reputation for yourself.

Interpretation: Those who are committed may always be suspicious of their partners. You should know that trust is important to sustain a relationship, therefore having a thorough discussion would be necessary.

If you are seeking a new relationship, make it clear to your prospective suitors about your future plans.

Seven of Swords Tarot Reading in Other Situations

Career and Work: Since you have been deceitful at work, chances are high you could be exposed. Also, you may come across two-faced people at work who could give you the wrong information. So make sure you don’t fall into this trap.

Finance and Business: You may either be cheated or cheat in your financial dealings that may not have any favorable consequences. However, in the end, you will come out clean.

Health: Although you have been warned many a time about your health, you seem to lead an erratic lifestyle without any restriction. Keep in mind that ignoring health is also cheating on oneself. 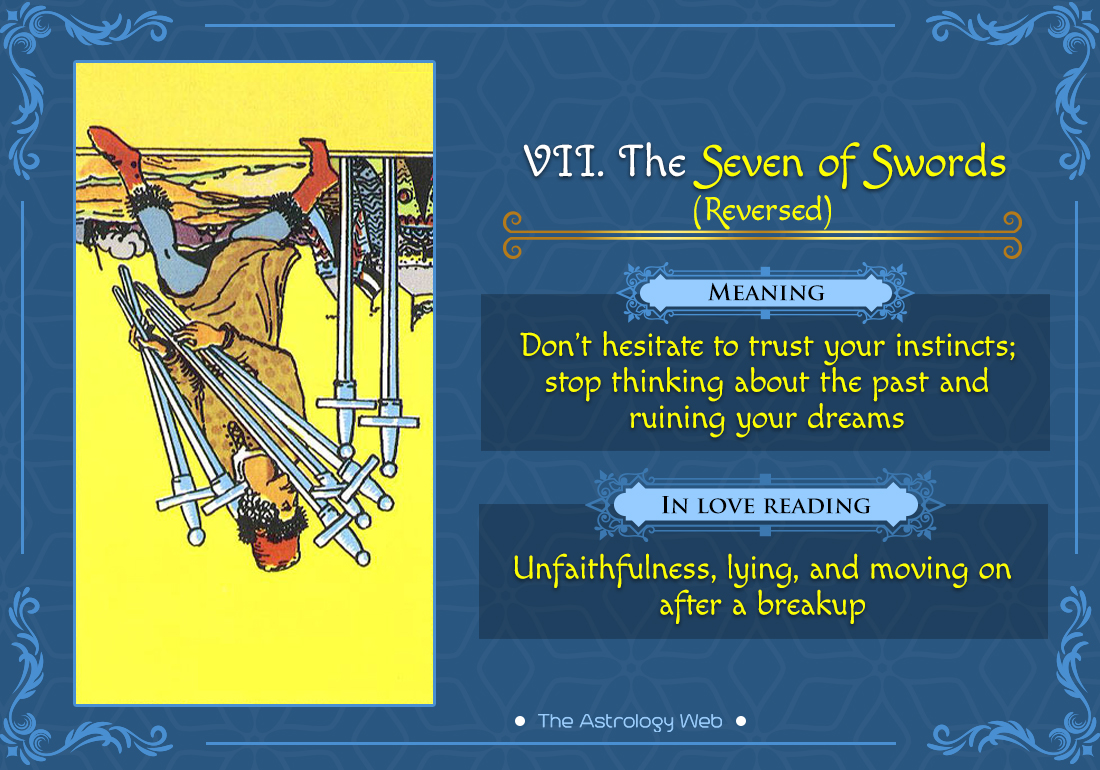 Interpretation: In the upside-down position, the card indicates that you are hesitating to take the first step in the right direction due to the thought of facing another setback. It could be because you are unable to recover from an old pain even though you know how to follow your dreams.

It would be advisable to shed the old habits and overcome mental blockages to achieve the things you desire. Follow a different approach if you are serious about your dreams.

Interpretation: Your straying nature will soon be found out by your partner or the other way round. Perhaps, your relationship will break, but the lessons learned would transform you into a new person.

Seven of Swords Tarot Reversed Reading in Other Situations

Career and Work: Your coworkers may be conspiring behind your back, sabotaging your progress at work by marking you incompetent. Try to prove your ability by being a bit tolerant and flexible if you want to be ahead in the race.

Finance and Business: The card suggests some you protect your wealth and properties from your potential business rivals. Don’t get involved in money gambles and wrong investments by deceiving anyone otherwise you may get easily caught.

Health: If you haven’t been able to detect the cause of your ill health, showing to a healthcare expert would be advisable. Also, during this time overindulgence would be more harmful to your well-being.

The Seven of Swords in Different Positions in a Tarot Spread

Past: In the past, someone may have cheated you or spoken behind your back that led to a breach of trust. You have been deeply hurt, but managing to come out of it.

Present: The 7 of Swords in this position speaks about a person who wants to hamper your plans for the future by pestering you to go in a different direction. If you can sense it, take productive steps from preventing it to happen.

Future: Your ideas and plans might irk many people known to you. Reanalyze yourself and make the necessary changes if needed.