The Seven of Wands Tarot (7 of Cards Tarot)

What is the Seven of Wands Tarot

The Seven of Wands is a card that belongs to the first suit (Wands) of the fifty-six cards called Minor Arcana in a traditional seventy-eight tarot card deck. Used for playing and divination, its suit element is fire.

How is the Seven of Wands Depicted in the Tarot Card

A man stands at the peak of a hill, holding a long wooden staff in outstretched arms. He is projected as someone defensive who seems to be fighting against his enemies. He is dressed ordinarily, wearing two different shoes.

There are six more wooden sticks attacking him from below while he retaliates them.

Meaning of Seven of Wands in the Tarot Card

The 7 of Wands symbolizes the struggle to stay on the top even after a lot of achievements and success. The man is an epitome of defense, stamina, and determination. The mismatching shoes refer to an unstable footing in life with no clear stand.

The Seven of Wands As a Person (Significator)

It represents someone who believes in taking a strong stand, removing ignorance and injustice, despite facing opposition from others. He is smart and knowledgeable being, having a strong determination to support weak and vulnerable people.

You are in a defensive mode, forcibly trying to put your point of view first. You feel like creating some controversy by fighting out with your peers.

As per the card’s suggestion, you need to realize your ambitions and furnish your competitive skills. You need to launch yourself again and show the world your peak performance. 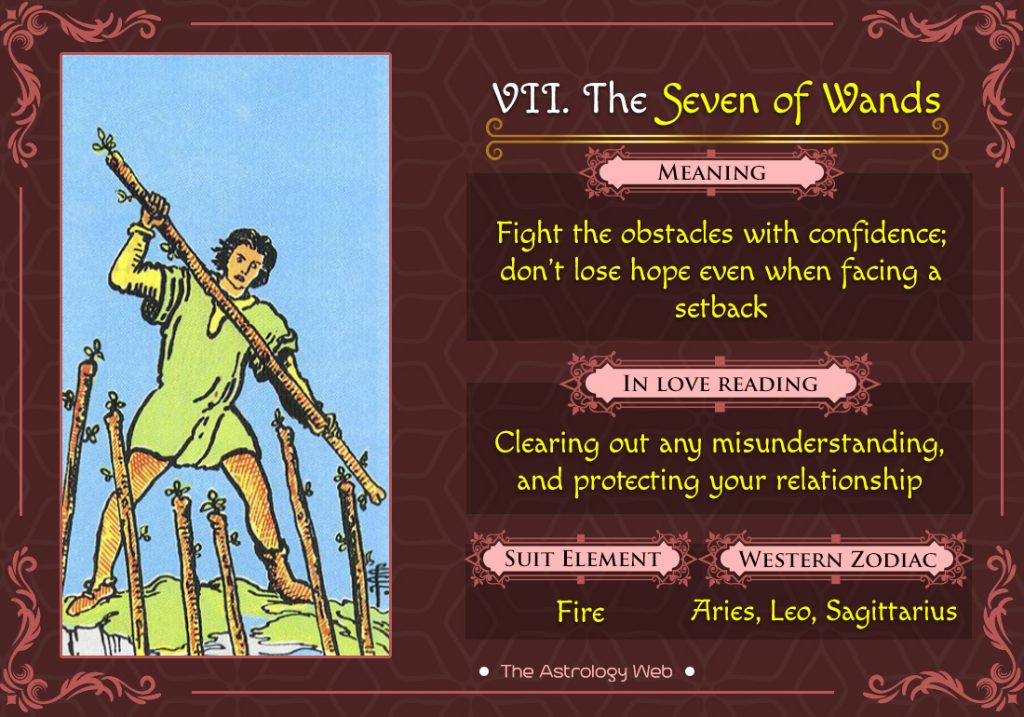 Interpretation: In this position, the card indicates that you are facing a stiff competition with those who want to get the same success and position enjoyed by you. Your self-confidence is challenged as you have to fight it out with your counterparts to defend your position no matter whatever challenges crop up.

The 7 of Wands advises you to accept the fact that every time you cannot win and consider your peers to be weak. Along with success comes cutthroat competition where obstacles would block your path to success. However, you have to battle out the hurdles without giving up your position and confront those who try to put you down.

Interpretation: If you are committed, be ready to safeguard your relationship from a third party who wants to create a rift. You have to decide how you can take control of the situation without creating any misunderstanding with your partner.

If you are single, getting a prospective partner would only mean fighting it out with the other suitors.

Seven of Wands Reading in Other Situations

Career and Work: You are feeling confident and powerful to climb up the success ladder. The vicious intentions of your coworkers to put you down have reached your ears. So, now you have become more alert and zealous to retain your place.

Finance and Business: Be it your savings, assets, or investment schemes, you are carefully handling them well to protect your money. Plan a long-term saving to get maximum profits.

Health: No matter what is the status of your health, you are trying every means to stay good. If you are going through an illness, don’t give up and face the challenge. 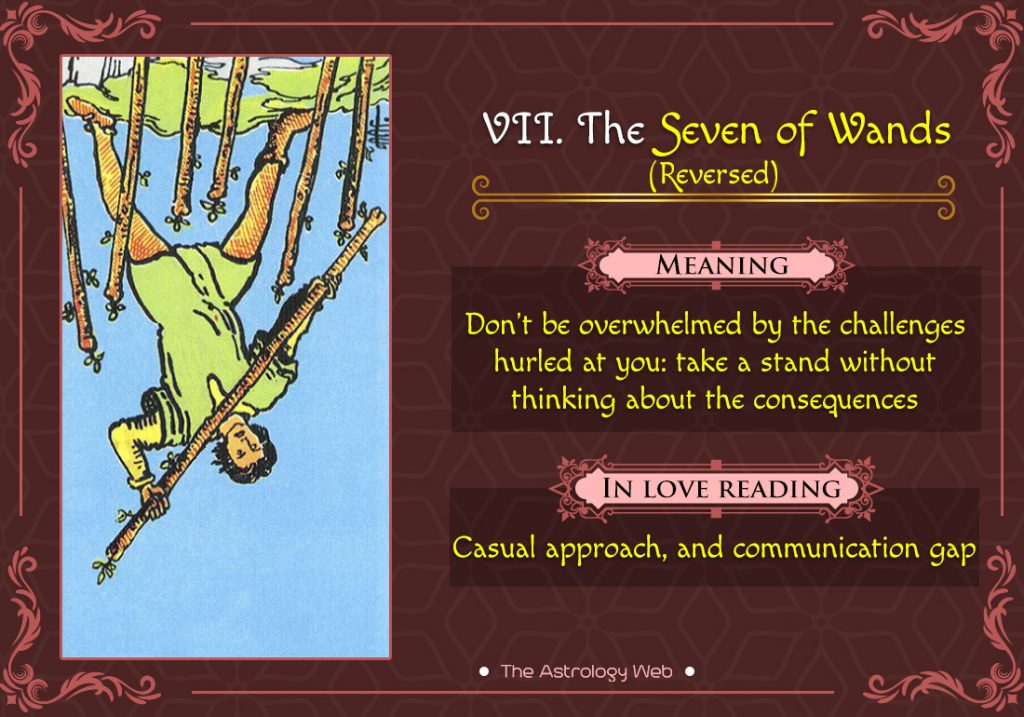 Interpretation: If the card appears in the upside-down position, it means that you are unable to handle too many responsibilities and challenges in your life. Since you are being constantly criticized by others, it’s hurting your ego making you feel inadequate. Also, you are not able to take a proper stand fearing that it may lead to a major conflict.

As per the card’s suggestion, you should not be afraid when someone challenges your position and questions your ability to stay at the top. Learn to stand up again and face the adversities instead of feeling lagged behind.

Interpretation: You are not doing enough to protect your relationship, creating a communication gap with your partner. If you continue doing so, your partner may demand a separation.

Seven of Wands Reversed Reading in Other Situations

Career and Work: Despite bagging a high position at your workplace, you are not working hard enough to retain, giving a greater chance to others to take over. All of a sudden, you have lost the zeal and energy to take up bigger and tougher challenges, portraying yourself as a weak person. Pull up your socks before it gets too late.

Finance and Business: You are either wasting money unnecessarily on unwanted things or putting your money in the wrong investment schemes. It’s high time you keep a watch on your monetary status.

Health: You are lacking the energy to look after your health, especially when it’s not in a good shape. Modify your eating habits and exercise routine if you don’t want to fall ill.

The Seven of Wands in Different Positions in a Tarot Spread

Past: Your hard work, efforts, and dedication in the past have brought you to here. Right now, it’s important to enjoy the rewards and take some to relax. If you feel low, think about the past to reenergize yourself.

Present: In the present period, you need to buck up as the ambiance around is getting competitive and challenging. If you stay confident and positive, nothing can stop you from moving ahead.

Future: If you are witnessing a path of growth, expect more to happen. There would be a lot of achievements and surprises. Certain things may not work as per your wish, but you should not lose your motivation.