What is the Hanged Man Tarot

The Hanged Man is the twelfth card in a suit of twenty-two cards, called the ‘trumps’ or the Major Arcana in a traditional 78-card tarot deck. Also known as Odin, the Suspended Person, the Pittura Infamante, it is used both in game playing as well as in divination. The ruling planet of this card is Neptune and its element is water.

How is the Hanged Man in the Tarot Card Depicted

It depicts a man dressed in medieval attire, hanging upside-down from a wooden ‘T’ by his one leg. The method of punishment was prevalent in Italy to penalize the traitors. However, the facial expression of the man hanging seems to be subtle (and not painful), which in turn suggests that he is hanging himself at his own will to ‘attain knowledge’.

As a support of this explanation, interestingly, many tarot cards depict a bright halo dazzling behind the head of the man hanging downwards, and often with hands either joined or tied-up.

What Does the Hanged Man Mean in the Tarot Card

The Hanged Man in the card represents self-sacrifice, independence, knowledge/wisdom, patience, understanding, self-control, crossroads, and letting things go. The man in the card reminds us that struggling against the present situation will be unfruitful while it is advisable to surrender oneself to the ongoing situation, and thus, let it pass away.

It wants to tell you that, no matter how much you get belligerent against the present scenario to get rid of it, you will only end up losing your energy, and eventually get delivered further into a situation of pessimism, frustration, and resultant despair.

The Hanged Man as a Person (Signifier)

The symbol is essentially meant for male seekers, but it has implication for the female as well. The commonest interpretation of the hanged man card is that the person has been temporarily stuck to the ongoing situation in his/her life. It is advisable to go with it for now. 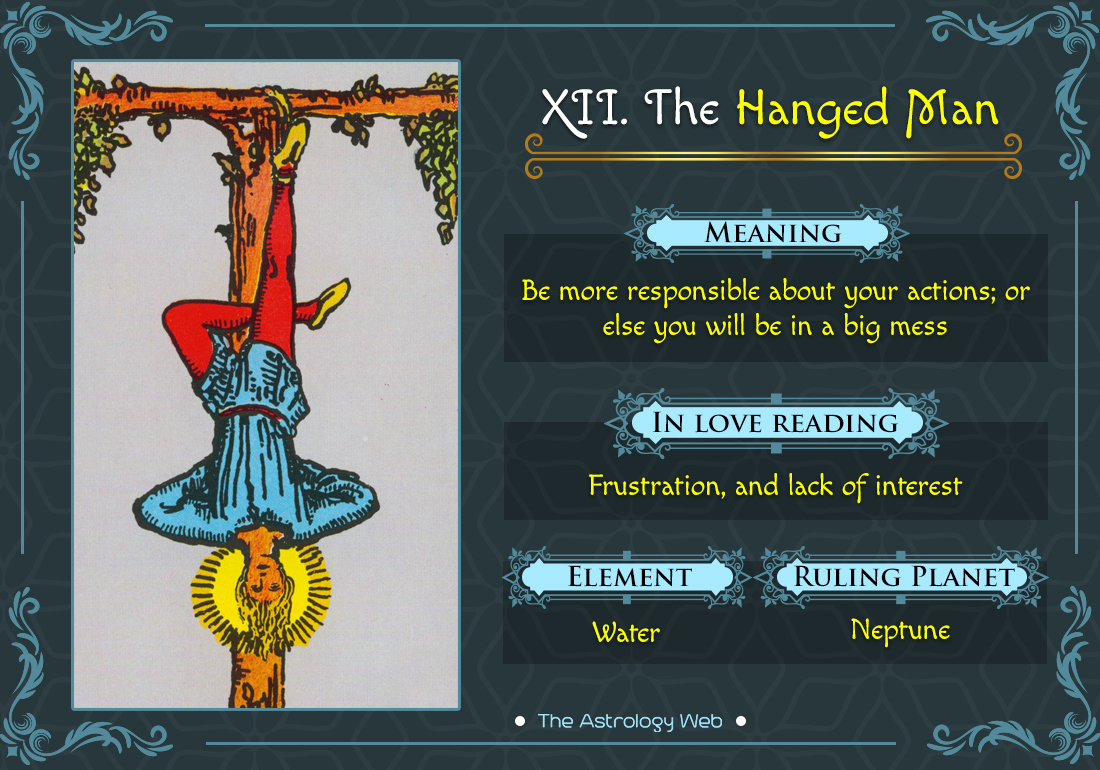 Interpretation: This is the time to take a stance on some old belief, situation, attitude, or friendship. Learn to take a responsibility on your own shoulders rather than putting it on to others. However, that does not mean that you would blame yourself and eventually bar you from proceeding forward in life.

Symbolism: High time to move on, part ways if needed.

Interpretation: If you are single, you need to apply your knowledge and spiritual power to win over your passion and wait for your love with patience.

If you are in a long-term relationship or are married, you might be at a crossroad of double-mindedness and despair at this point in life. You might need to get rid of a relationship that seems to be pulling you from advancement (or just acting as a hindrance).

Education: As mentioned, the hanged man card already symbolizes knowledge, enlightenment, and education, however, the educational process through which wisdom and knowledge can be attained is self-sacrifice, intuition, and patience.

Career and Finance: If you find certain things are not getting well at your workplace or in situations related to business, money or finances, it is advisable you get rid of the habits of putting the blame on others (or even yourself). This card wants to say that, some major things or situations related to your current work might show up. So, take some time and think everything over.

Health: It is high time again to sit and think and then act upon it accordingly so as to bring in some effective changes to your health, lifestyle, and the ways of life on how to improve this. 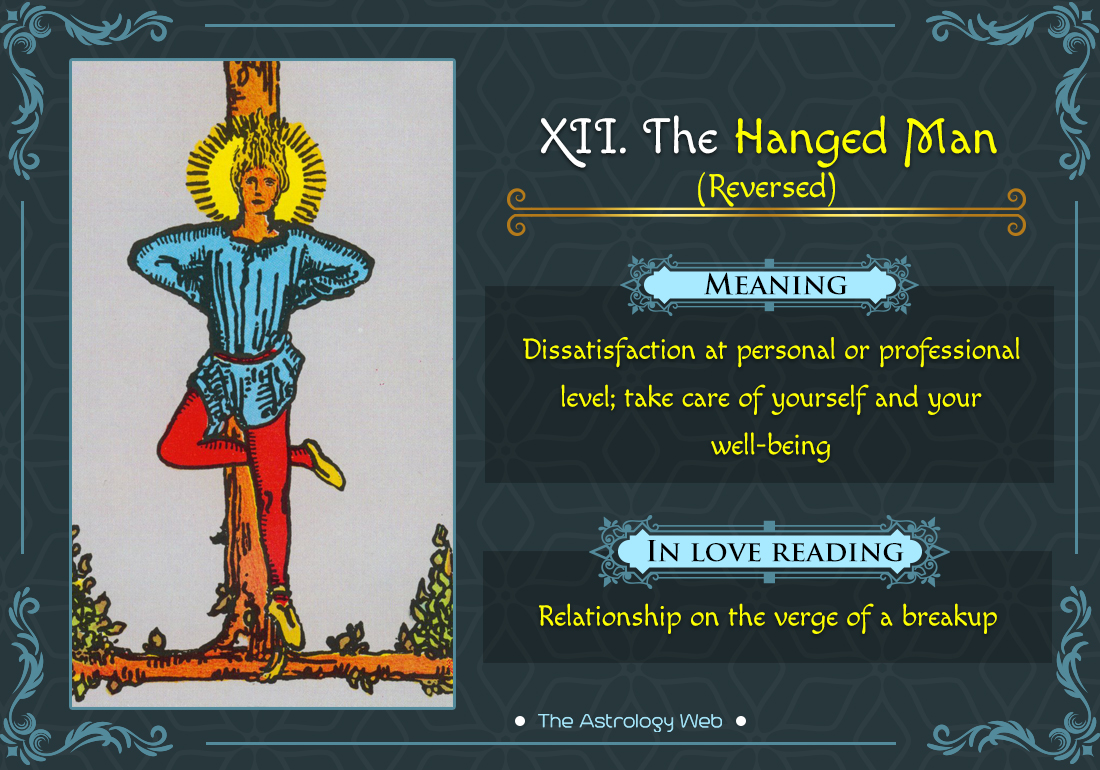 Interpretation: The appearance of the reversed card signifies that, at present, you would discover yourself at a standstill, being quite indecisive about something important. You are fumbling in the dark to find a way out of this and take a fruitful decision.

Reversed hanged man may also point out a problematic situation at your workplace, or suggest that you give more attention to your health.

Symbolism: Stuck in one place, indecisiveness, a conflict between truth vs. belief

Interpretation: It usually means that currently, your relationship is on hold, or maybe even at stake. However, this is not always the case since it can also indicate a good love- or life-partner with whom you need to be patient.

The Hanged Man in Different Positions in a Tarot Spread

Past: This implies that the roots of your present situation have reached deep into the past, the time when you backed down. Probably you either had to compromise with the situation from which someone else was benefitted or else, you were not as assertive as you should have been.

Present: The implication of this position depends upon whom the card represents. If it hints at you, it means that some turmoil inside your mind is on its way. At this point, you should only stay silent and watch, since you will only end up getting hurt if you get defensive or aggressive. Again, if it hints at someone else, you should consider it as a warning advice to wait and observe, and act according to the situation as to what that person proves to be in the longer run.

Future: This position advises you to make a firm decision as to whether you will stay strong and fight back, or would like to surrender.

Hanged Man Tarot Meaning in Combination with Other Cards